On a night when the top line was anything but “top,” on a night when the goaltending was tending to be a bit shaky, the Washington Capitals found a spark in the unlikeliest places, then held on for a 4-3 win over the Tampa Bay Lightning at Tampa Bay Times Forum.

The spark came in the form of the line of Eric Fehr, Mathieu Perreault, and Joel Ward,  Fehr recorded his second and third goals of the season, Perreault had three assists, and Ward contributed a helper for the game’s dominant line.  Troy Brouwer added a power play goal, and Jay Beagle added what would be the game-winner in the third period, while goalie Braden Holtby recorded 27 saves to get the win.

-- We made a point in the prognosto that the Lightning were a strong third period team, outscoring their opponents by more than a goal a game in the third period alone.  Sure enough, after Jay Beagle made it a 4-1 game, the Lightning outshot the Caps by an 8-5 margin over the next ten minutes in cutting the lead to 4-3.  But the Caps buttoned things up in the last two minutes, holding the Lightning without a shot on goal, including the last minute when Tampa Bay had an extra attacker on the ice.

-- A few more words (with pictures) about the power play… The 1-3-1 is, like much about the game, a case of geometries, in this case triangles.  As this power play unfolded one could see the Caps “getting it.”  The 1-3-1 cleaves into two triangles, with the long axis of each shared as a line going from the point (Mike Green) through the slot (Troy Brouwer in this instance) to the player manning the crease area (in this case Mathieu Perreault).  Here it is, with the triangle completed by the trigger man along the right wing wall, Nicklas Backstrom, passing to the point: 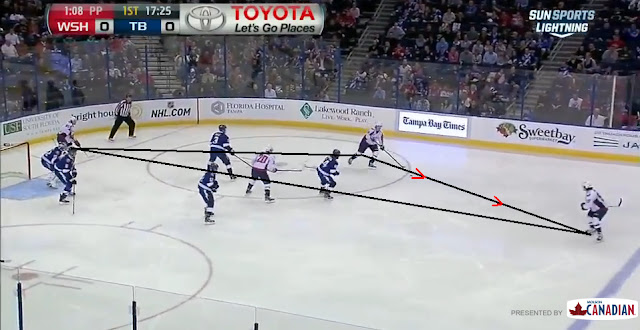 Green accepts the pass, but look at the triangle.  It maintains its integrity in the long axis, Troy Brouwer shifting with Green as Green eases off toward the left side.  Green will then return the puck to Backstrom: 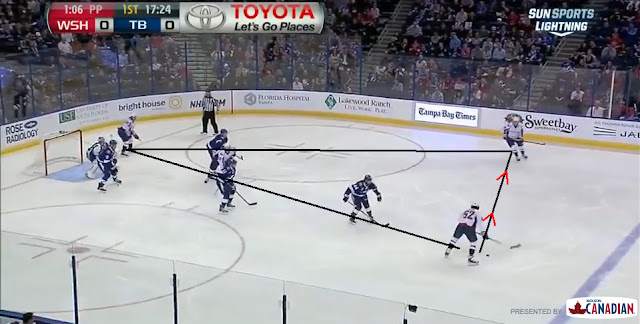 Backstrom has moved above the right wing circle in this next frame, but again the integrity of the triangle is maintained.  Backstrom now has choices: a) shoot, b) shoot with the aim of getting a Brouwer deflection, c) return the puck to Green for a one-timer, d) pass to Perreault at the goal line extended.  Backstrom will choose (d): 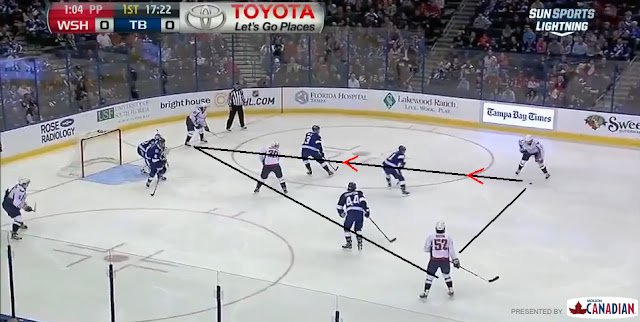 Perreault receives the puck, and now he has choices that depend on what the Tampa defensemen and goaltender do here. He can: a) walk out and try to stuff the puck past the goalie, b) try to slide a pass across the crease to Alex Ovechkin (the point of the other triangle on the left side), c) return the puck to Backstrom, or d) pass to Brouwer between the hash marks for a shot.  The goalie is playing hard to the near post, and the defenseman to his right (Sami Salo) is watching Perreault.  With this combination of variables, the play is to the player neither the goalie nor defenseman is occupied with – Brouwer.  Perreault chooses (d). 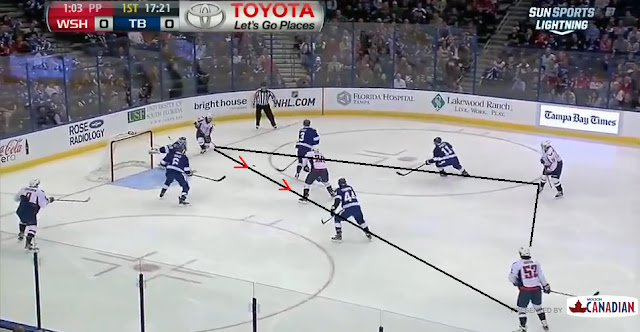 All that is left here is for Brouwer to get the shot on net, since the goaltender is still at the left post.  He does so…celebrating ensues: 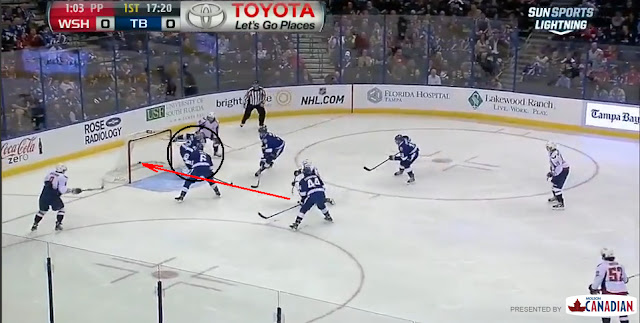 -- Eric Fehr now has goals on three of his last four shots on goal.  That Fehr-Perreault-Ward line is almost like the Rat Pack.  Peter Lawford (Ward) stirs the drinks by digging for pucks, Frank Sinatra (Perreault) sings the tune with his set ups, and Dean Martin (Fehr) gets the girl, as it were, by scoring the goals.

-- These are games the Caps have to win, and here is why.  Neither Alex Ovechkin nor Mike Ribeiro had a point, and both were minus-2.  There will be nights like that, it happens.  The trick is for others to step up.

-- Braden Holtby was excellent early, good in the middle, and a real adventure late.  Kudos for trying to surprise Nate Thompson with a sliding poke check on Thompson’s breakaway, but yeesh, it looked bad.

-- Any night you hold Steven Stamkos to fewer shots (two) than he has hits (three), and no goals in the process, consider it a pretty good night for the defense.

-- And holding the Bolts to one power play shot (Stamkos) in four minutes of power play time…pretty good for the defense, too.

-- Every single Capital skater had at least one shot on goal.  This is how you deal with a one-dimensional team like the Lightning (all “O,” no “D”)…shove their dimension right back in their face.

-- Cory Conacher, the darling of the media after the season opener when he had a two-point night in the Lightning’s 6-3 win over the Caps, drew a penalty but was otherwise not heard from.  That’s six straight games for him and a minus-6. Welcome to the bigs, kid.

-- Backsliding… 11-for-26 on faceoffs in the offensive zone, Backstrom and Ribeiro going 5-for-17 between them.

In the end, three is better than two.  As in “winning streak,” which is where the Caps now find themselves.  They have 15 goals in those three games, they are 4-for-6 on the power play, and in spite of some occasional adventures in goaltending are not playing bad defense.  They look like a playoff team.  We will get a better picture on that score when they visit the Rangers in New York on Sunday.