Do you really want this man mad? 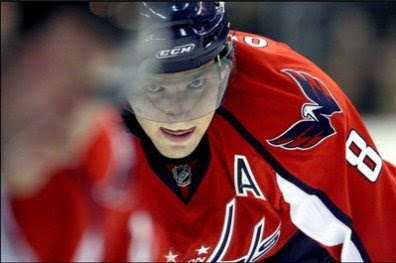 "Can you imagine if he gave (Varlamov) an injury, what are we going to do? If it's not going to be called it's going to be a terrible decision and I'm going to be (mad) about it."

-- Alex Ovechkin on the decision by the NHL not to suspend
Penguin Chris Kunitz for his late game stick work on Semyon Varlamov
Posted by The Peerless at 2:48 PM 5 comments: 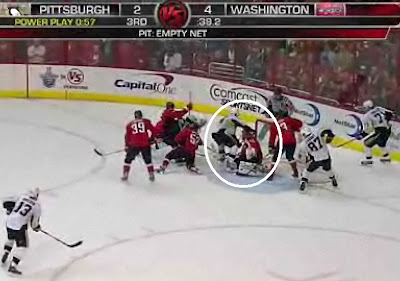 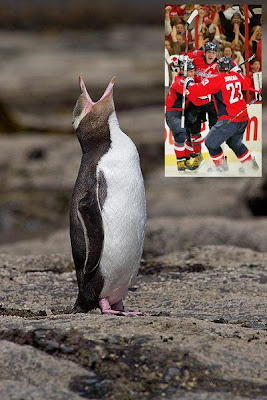 If the Penguins lose this series, having fallen behind 2-0 after tonight’s 4-3 win by the Caps, here’s a career tip for their players…

Go buy some land, fertilize it, grow some grapes, and make some WHINE!

For the love of Mike, it was embarrassing to watch. Let’s leave Sidney Crosby NOT complaining about too many hats being thrown on the ice after Alex Ovechkin completed a hat trick, even when he was complaining about it (was one too many when he got his hat trick?) out of it. It was like watching some perverse “March of the Penguins.” After every freakin’ whistle, there was a Penguin waddling up to an official yapping about something. It’s too loud, it’s too red, it hurts my eyes, can they not play that “Unleash the Fury” thing…

It didn’t take away from a game that Versus should offer as a special DVD issue. The stars delivered – Ovechkin with a hat trick, Crosby with a hat trick. But it was “Deadeye Dave” Steckel who pounced on a loose puck and rammed in home behind Pittsburgh goalie Marc-Andre Fleury that was the difference (yes, Ovechkin’s hatty was the game-winner, we know).

After the game, Crosby noted that “we had opportunities, I mean, the last two games we can honestly say we did some really good things but we made a few mistakes that have hurt us. That can be a good thing to look at as well, knowing that we're that close and these are things that we can easily and change quickly. But we have to do that."

If anything, the Caps have corrected more of their mistakes than the Penguins have done with theirs. Foremost among them might be what they did in the circle tonight. We spend a lot of time talking about that, but when there are two teams facing off against one another that depend on puck control and forechecking, winning faceoffs is important. And tonight, the Caps won 38 of 61 draws.

More to the point, the Caps won 15 of 23 offensive zone draws and and 13 of 19 defensive zone draws. That’s a lot of possession the Penguins didn’t start with. And once again, as was the case in Game 1, Sidney Crosby was abused by David Steckel in the circle, this time to the tune of 9-for-11 in Steckel’s favor. If you’re comparing superstar performance, Alex Ovechkin is 3-for-3 on draws so far, tonight beating Matt Cooke on the only draw he took.

- Viktor Kozlov had two assists, but that really doesn’t tell the story of his performance. He was at his puck-lugging best, controlling the puck and entering the offensive zone under control (a marked departure from the later stylings of Michael Nylander, he of the enter, spin, and send a pass..somewhere school).

- There was an uncomfortable amount of commentary about Mike Green tonight that suggested he was off his game (a continuation of the theme coming out of the Ranger series). Green did not register a shot on goal tonight, but he had four hits and four blocked shots. If anything, it looks as if Green is adapting his game to a tighter style of play one finds in the playoffs. Not everything in the post-season is back door goals and end-to-end rushes. It isn’t yet a style he is especially adept at playing, but he is adapting and improving at just moving things along and taking a hit to make a play.

- Pittsburgh got two power play goals (two for five on the night), but we wouldn’t see that as necessarily an end to their woes. Sidney Crosby – for too many long stretches the only Penguin who drove to the net with authority – banged home some loose change that goalie Semyon Varlamov arguably should have covered, and Crosby swatted a puck out of mid-air on his third swing at it with the Pens on a 6-on-4 advantage in the last minute as goalie Marc-Andre Fleury had retreated to the bench in favor of the extra attacker.

- Two years ago, Alexander Semin shied away from contact and, quite frankly, could be intimidated physically. Tonight, he decked Brooks Orpik. That qualifies as taking on the big dog on the block in terms of physical play. It earned him a penalty (Crosby scoring on the ensuing man advantage), but it was almost nice to see. Semin is getting to where he can hold his own with most guys without it seeming to affect his offensive skill set.

- Killing that five-on-three situation in the first, with the Penguins already holding a 1-0 lead, was huge, with a capital “H.” Why? Because it was defensemen Tom Poti and Mike Green in the penalty box. Poti leads the team in shorthanded ice time, and Green was averaging more than 2:30 coming into this game.

- OK, Kris Letang had a point complaining to the referee. He looked to me to have clearly gotten the puck before tripping David Steckel.

- We were a little surprised that it was Tyler Sloan getting the call for the injured John Erskine, instead of Karl Alzner. But again, that’s why Bruce Boudreau is a Jack Adams winner, and yours truly knows jack squat about what buttons to push. Sloan had a couple of adventures out there, but was overall very solid – an assist, three blocks and (in what might be the biggest surprise of all) more than 16 minutes of ice time.

- We wonder if the league is going to take a look at Chris Kunitz’s interesting bit of stick work to the neck of Semyon Varlamov late. There was no play there, and one might have expected that even if there was, that Kunitz would have been trying to apply the stick to the puck, not in the fashion he did.

- Another “mistake” the Capitals seem to have corrected – at least for this game – was in paying price to block shots. They “outblocked” the Penguins 23-17. Mike Green, Tom Poti, and Shaone Morrisonn each had four. Tyler Sloan and Milan Jurcina had three apiece.

- Seven shots in the third period, three of those in the last 2:53. Four of the shots came from more than 30 feet out, three of them from more than 40 feet. From 12:04 of the period until 17:07, the Penguins didn’t register a shot, but the Caps scored two goals. The Caps defense tightened up considerably in the third period and made Varlamov’s job a lot easier after having faced 29 shots in the first two periods.

- Eric Fehr took three shifts, all in the first period, totaling 2:09 in ice time. Chris Clark had only one third period shift, none in the last 15:39.

- Kris Letang missed the last 6:19 for the Penguins. Coach Dan Bylsma could not comment on the extent of the apparent injury Letang suffered in the third period.

- Evgeni Malkin had six shots on goal, but for the second consecutive game, it looked as if he was pushed more to the perimeter. The Caps have done a good job so far of not allowing him time and space to sort through his options in the offensive zone.
- We're going to take to skipping the post game radio show...it gets really tiring hearing about this Cap and that Cap not doing this, that or the other thing, or fans' "concerns" about the team. Uh, folks? Who won? It's not how, it's how many. Think the Penguins are taking any comfort in winning style points tonight?

The last time the Caps went up two games to none, they dropped the last four in succession to the Tampa Bay Lightning in 2003. Two is not four, and there is a lot of work yet to be done against a team that is dangerous on every shift. There are things you’d have to like as a Caps fan, the inability of Penguin wingers to make their presence known being tops on the list, Fleury’s being good – but by no means great – being second. As for Malkin, we’ll just let sleeping dogs lie. He’s likely to be heard from in this series…here’s to hoping it happens too late for it to matter. For now, the Caps have merely held serve. But they are undefeated in Mellon Arena this year, not something that could often be said of a Caps team. To remain that way, they’ll have to be better than they were tonight…

…because Pittsburgh will be.
Posted by The Peerless at 12:50 AM 8 comments: