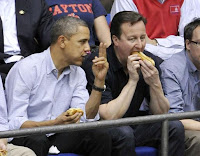 The Washington Capitals seem a lot closer to solving their early season problems on offense, if last night’s 6-5 overtime win over the Florida Panthers is any indication.  The Caps came from behind three times, including from a two-goal deficit with just over five minutes remaining in regulation to tie the game, then won the game in the first minute of overtime to take the back end of a home-and-home series with the Panthers.

The Caps started the scoring early on a Mike Ribeiro power play goal just 4:26 into the game.  Ribeiro took advantage of four Panthers watching Tomas Kundratek carrying the puck, including defenseman Tyson Strachan, who really had nothing else to do but defend against the weak side of the play. Kudratek hit the wide open Ribeiro at the edge of the right wing circle, and all Ribeiro had to do was make sure his shot was on the net that goalie Scott Clemmensen did not have time to slice across to cover.  It was, but it was hardly pretty.  Ribeiro mis-hit the puck and ended up firing what looked like a sand wedge out of a bunker on the golf course, a shot that fluttered end over end into the net.

Florida shook the early goal off and came back with two of their own before the first intermission, courtesy of Tomas Fleischmann and Shawn Matthias, but that only started the lead changes in this game.  The Caps tied it on a fluky play 5:33 into the second period.  First, on a faceoff to Clemmensen’s right in the Panther zone, Mathieu Perreault was tossed from the circle by the linesman, and Joel Ward circled in to take the draw.  Ward jumped the draw and spun into Drew Shore, enabling him to get his stick on the puck.  But rather than pull the puck cleanly back to the point, Ward managed only to hit the linesman’s skate, the puck ricocheting back to Karl Alzner whose ensuing shot seemed to surprise Clemmensen.  The goalie barely flinched as the puck settled into the back of the net.

Jonathan Huberdeau scored the next two goals for the Panthers, sandwiched around a goal by the Caps’ Mat Hendricks, his third of the year.  That was how the second period ended, the Panthers holding a 4-3 lead.

Florida added to their lead less than seven minutes into the third when Drew Shore scored his first of the season with Jack Skille adding his first assist of the season.  At that point, with the home team holding a 5-3 lead, things looked bleak for the Caps.  But Eric Fehr got them within a goal at the 14:53 mark when he tipped in a Mike Green drive.  It was another defensive adventure by the Panthers, who had no skater below the hash marks to defend Fehr, who was parked at the top of the crease.

The Caps tied it in Capitals style with less than three minutes left.  With Huberdeau off for slashing John Carlson, the Caps had a faceoff in the Florida end.  Nicklas Backstrom tied up Marcel Goc on the draw, giving Mike Ribeiro an opportunity to jump in and control the puck.  He fed it out to Alex Ovechkin at the top of the left wing circle, and Ovechkin did the rest, wiring a wrist shot past Clemmensen to tie the game and send the contest to overtime.

It didn’t take long from there.  It was the last of a parade of defensive miscues by the Panthers that brought the curtain down.  Dmitry Kulikov coughed up the puck in the offensive zone to Nicklas Backstrom who spied Troy Brouwer heading in the other direction down the right wing.  Backstrom hit Brouwer in stride behind the defense on a break.  Scott Clemmensen was able to stop the first Brouwer shot with his right pad, but the Panthers were so out of the play defensively that no one was in a position to deal with Brouwer when he got the rebound of the shot and stuffed in underneath Clemmensen to end it.  How bad was the Panther defense on this play?  The player circled below is defenseman – that’s defenseman – Brian Campbell, who was more or less drifting back as this play was unfolding. 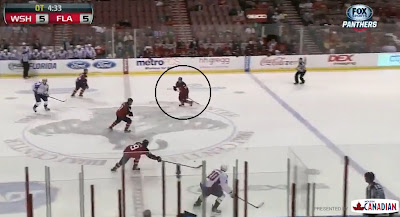 And it is not as if he’s getting much in the way of help from the other two skaters in this frame, especially Stephen Weiss who just seems to let Brouwer go, perhaps thinking he had deep help that never arrived.

-- OK, in any game when the two goalies split allowing 10 on 59 shots in regulation time, you are not going to say either had a good game.  But neither was as bad as the save percentages suggest, either.  Braden Holtby had a ten-bell point blank save to his credit, and Clemmensen could have sued his teammates for non-support for most of the game.

-  Firsts… Karl Alzner and Eric Fehr getting their first goals of the season… the Caps winning their first road game of the season (the last team in the NHL to do so)… the Caps winning consecutive games for the first time this season… and Alex Ovechkin getting his first fighting major of the season (ok, he didn’t, it was more of a wrestling match, and he and Kris Versteeg got coincidental roughing minors in their tribute to sports taken from the list of core competitions by the International Olympic Committee).

-- Jason Chimera… no goals, no assists, no shots, on ice for three goals against, only one shift taken in the third period, 5:43 in ice time.  Not the best of nights.

-- Chimera’s lack of ice time had ripples through the lineup, including Matt Hendnricks getting time with Mike Ribeiro and Alex Ovechkin on the top line.  It seemed to energize Hendricks, who had a goal, five shot attempts, five hits, and three wins in four faceoffs taken.

-- The multiple point scorers also included Nicklas Backstrom and Alex Ovechkin.  It was the first time this season that both players had multiple points in the same game.

-- Backstrom was 6-for-8 in offensive zone draws, Ribeiro was 4-for-7.  That is what you are looking for.  Winning in the attacking end and getting the guys you depend on for offense to do the winning.

-- Backstrom took 29 of the 68 faceoffs in this game, winning 19 of them.  Practice makes perfect?

-- You would normally see Alex Ovechkin’s name on the league leader board among forwards in hits.  Not so this season, at least so far.  His 23 recorded hits in 13 games it tied for 59th among forwards.  He had one last night.  Even Mike Ribeiro was credited with two.  But that hit, just 69 seconds into the game on Kris Versteeg, resulted in a power play later when Versteeg tried to exact his pound of flesh from Ovechkin.  When the two were sent off for roughing, Versteeg got the extra minor for cross-checking Ovechkin to get the tussle started.

In the end, two is better than one – wins that is.  The Caps are on a winning streak.  Huzzah!  But now they have to leave the comfort of the Florida Panthers as an opponent and move up in weight class with visits to Tampa Bay and the New York Rangers coming up on this road trip.  Still, the Caps look to be in fine rhythm and seem prepared to take on that challenge.