The Peerless Prognosticator is ON THE AIR!!! -- Game 25: Bruins at Capitals, December 7th

When the Washington Capitals host the Boston Bruins on Wednesday night, it will be a contest of two teams with similar records and similar numbers, if not similar styles.  The Caps go into the contest winners of their last game, a 3-2 overtime win over the Buffalo Sabres that snapped a three-game losing streak (0-2-1).  On the other hand, the Bruins arrive in Washington winners of three straight and four of their last five games after a three-game losing streak of their own (4-0-1).

Before one gets the notion that the Bruins have turned things around, though, keep in mind that they have been playing right on the margin.  Each of their last four games were one-goal decisions, three of them settled in extra time, two of them in the Gimmick.  Still, the Bruins find themselves with 31 standings points, third in the Atlantic Division and tied with the Caps and the Philadelphia Flyers in the Eastern Conference (the Caps have two games in hand).

In the Bruins’ 4-0-1 run over their last five games, they are led in goals by David Backes and David Pastrnak with three apiece.  Backes and Pastrnak represent the dawn and the dusk of sorts on the Bruins roster.  Backes, at age 32, is the fourth-oldest player on the Bruin roster.  He is in his first year in Boston, a free agent who signed a five-year/$30 million contract last summer, after spending ten seasons with the St. Louis Blues.  He has a reputation of being a tough, two-way forward, one who only once in the last seven full seasons (not including the abbreviated 2012-2013 season) failing to reach the 20-goal mark and twice topping 30 goals.  He can certainly mix it up physically, having accumulated 992 penalty minutes in 748 career NHL games, 23 of those minutes recorded in 21 games this season.  In 11 career games against Washington, Backes is 3-3-6, minus-2.

Pastrnak is at the other end of the spectrum, age-wise.  At 20 years of age, he is the youngest player on the Bruins’ roster, and he might be the biggest surprise.  His 15 goals in 21 games ranks second in the league, trailing only Winnipeg’s Patrik Laine (16) and Pittsburgh’s Sidney Crosby (17).  The 15-goal total already matches his total in 51 games last season.  But his goal scoring is not out of line with his early-career performance in which he is averaging almost 30 goals per 82 games over his first two-plus seasons.  Of particular importance to this game, Pastrnak has been a beast on the road with nine goals scored in eight of the 11 road games played by the Bruins to date.  He has yet to record a point against the Caps in three games in his career so far and is a minus-1.

It appears that the end might be in sight for the career of defenseman Zdeno Chara.  And what a remarkable career it has been to date.  Chara is, by far, the leader among active defensemen in games played (1,295), far ahead of the Flyers’ Nick Schultz (1,050).  Only 16 defensemen have played in more games in NHL history.  This season, Chara dressed for the Bruins’ first 19 games before sitting out with an undisclosed injury for six games.  He returned to the lineup on Monday against the Florida Panthers.  At age 39 (he will turn 40 in March), he remains a formidable physical presence with an extraordinary reach that goes with a 6’9” frame, but his offensive production has wilted somewhat in recent years.  This season he has one goal and has gone 17 games since scoring that one.  With six points in 20 games he is on a pace to finish with 23 points, which would be barely half of what he posted in 80 games last season (37).  In 63 career games against the Capitals, Chara is 7-19-26, plus-8 (five of the seven goals are power play goals). 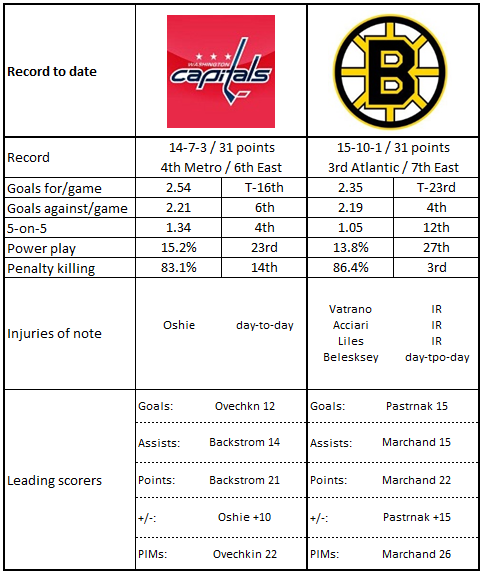 1.  Dominic Moore has six goals in 26 games, a pace to score 19 for the season. He hasn’t had more than ten in any season since 2010-2011 (18), with Tampa Bay.  That was three teams ago for Moore (the San Jose Sharks and New York Rangers intervening).  He’s played for ten different teams in a 12-year career.  The post office must love this guy for mail forwarding.

2.  Boston gets pucks to the net. Boston is third in the league in shot attempts per game in all situations (61.1), but they are second in shots on goal per game (33.2).

3.  Through 26 games, the Bruins have had just one contest decided in the five-minute overtime, second fewest in the league (the New York Rangers have yet to have a game settled in the extra hockey frame). And that game was just this past Monday night against the Florida Panthers, a 4-3 win on a goal by David Pastrnak.

4.  Five teams have perfect records when leading after two periods, and Boston has more wins than any of them (12-0-0). On the other hand, the have only one win when trailing after 40 minutes.  Six teams have yet to win a game in that situation.

5.  Boston has the second-best Corsi-for at 5-on-5 in the league (53.70 percent; numbers from Corsica.hockey). They do it mostly with offensive pressure, their 60.44 shot attempts per 60 minutes at 5-on-5 ranking third in the league.

2.  The Caps have scored more than four goals just twice this season (a 7-1 win over Pittsburgh on November 16th and a 5-2 win over Vancouver on October 29th). Only four teams – Arizona, Carolina, Colorado (once apiece), and San Jose (zero times) have done it fewer.

5.  The Caps have been quite efficient at denying shot attempts. Their 50.83 shot attempts allowed per 60 minutes at 5-on-5 is fourth fewest in the league (numbers from Corsica.hockey).

At the end of the film “Sunset Boulevard,” Norma Desmond (played by Gloria Swanson) speaks the line, “Alright, Mr. DeMille, I’m ready for my close-up.”  Well, Caps fans are ready for Andre Burakovsky’s close-up, or at least his return to something resembling reliable contributions on offense.  Burakovsky hasn’t scored a goal since the Harding administration.  Okay, since Opening Night, but it just feels like 95 or so years.  He doesn’t have a point in four games, and over those four contest has just three shots on goal.  The odd part of that last fact is that he is shooting at a frequency (1.67 shots per game for the season) that approximates last year’s frequency (1.59 shots per game), but the bottom has fallen out of his shooting percentage (5.0 this season compared to 13.5 last season).  After scoring on his only two shots on goal on Opening Night against Pittsburgh, Burakovsky is 0-for-38 in his last 23 games.  He was not among the four lines taking drills at Monday’s practice, but if he does get a sweater against Boston, he is 1-3-4, plus-4, in five career games against the Bruins.

On Monday night, the Caps struggled with a team in the Buffalo Sabres that worked hard, battled in the corners, and crowded the net.  They barely escaped with a win.  The difference on Wednesday night when the Caps host the Boston Bruins is that the Bruins have much more offensive talent than the scoring-starved Sabres.  Players like Brad Marchand, Patrice Bergeron, and David Backes do not generally take many shifts off, and they can score.  Add in the prolific play of David Pastrnak so far this season, and the Bruins pose a different, more difficult challenge.  The Caps dominated the last 15 minutes and overtime of their game against Buffalo on Monday.  Less than 20 minutes of hard work and attention to detail on Wednesday just won’t do it.