The Peerless Prognosticator is ON THE AIR!!! -- Game 49: Capitals at Devils, January 26th

The Washington Capitals head back to the ice on Thursday night in an effort to start another winning streak and head off to the All-Star Game break on a high note as they visit the New Jersey Devils at Prudential Center in Newark.

The Caps saw their 14-game points streak (12-0-2) snapped on Tuesday night in a 3-0 shutout by the Ottawa Senators. The Devils have alternated wins and losses over their last four games, although they are 4-2-0 in their last six contests to draw within four points of a playoff spot through Tuesday night’s games. Over those six games, the Devils have outscored their opponents, 14-12.

Kyle Palmieri leads the Devils with three goals in the team’s last half dozen games. It is something of a wake-up call from his scoring slumber this season, one in which he has 11 goals in 47 games after posting his first 30-goal season last year. If anything, that 30-goal campaign (his first with New Jersey after five seasons with the Anaheim Ducks) looks like an outlier for a player who never finished with more than 14 goals in any of his previous five seasons, although he does have seven goals in his last 17 games. His goals do seem to be impactful. Of his 84 career goals to date, 19 of them are game-winners. Palmieri is 2-2-4, plus-2, in nine career games against the Caps.

Perhaps conspicuous by his absence among the goal leaders over the 4-2-0 run of late is the team’s leading goal scorer for the season, PA Parenteau. He is dragging a nine-game streak without a goal into this contest, and only one since he potted one against the Caps back on December 29th, but he still has 12 to top the club overall. In the last six games he does have four assists, tied for most on the club. The odd part about his goal scoring is that the Devils are just 5-3-4 in the 12 games he has a goal. Parenteau is 5-7-12, plus-6, in 16 career games against Washington.

Only two Devils defensemen have played in all 49 games this season – Damon Severson and Ben Lovejoy. Saverson leads the team’s blueliners in points (3-19-22), but he has a ghastly minus-22 to go along with that scoring line. Of 275 defensemen to dress this season in the NHL, only Colorado’s Tyson Barrie is worse (minus-23 for the worst team in the league, standings-wise). In his favor, he has run off a five-game streak of even or better. On the other hand, he has been a minus player in almost half (22) of the games he has played this season. He is 2-0-2, minus-8, in seven career game against the Capitals. 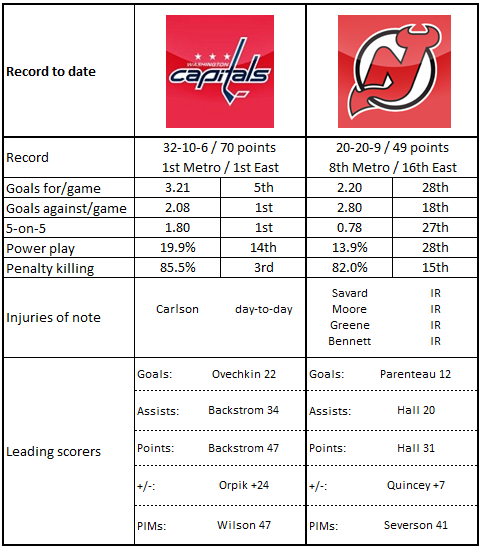 1.  The odd part about the Devils’ situation is that while they are just four points out of a playoff spot through Tuesday night’s games, they have played more games than any other team in the Eastern Conference (49) except the Boston Bruins (51). When coupled with their 17 wins in regulation and overtime, second fewest in the East, the Devils are last in the conference standings, meaning that before Wednesday night’s games, they have eight teams to climb over to get a wild card playoff spot.

2.  That the games over the Devils’ 4-2-0 run should be, on average (2.33 – 2.00), low scoring should be no surprise to anyone who has paid even casual attention to Devils hockey in recent years. Or for a couple of decades, for that matter. In the 21 seasons since the 1994-1995 lockout season, New Jersey is 29th of 34 franchises (including multiple incarnations of current franchises) in scoring offense (2.63 goals per game) and first in scoring defense (2.38 goals per game). Goals just aren’t a frequent occurrence with this team, for or against. It is their signature.

3.  Only two teams in the NHL have outshot their opponents less frequently than the Devils – Buffalo (14 times) and Arizona (ten times). New Jersey is 10-3-3 in 16 games when outshooting their opponent.

2.  The alarming thing about that points streak is that in 14 games, the Caps faced 23 more shorthanded situations (59) than they had power plays (36).

3.  In the “you can see it coming” thought about the end of the streak, the Caps were out-shot in each of the last five games of the streak by a combined total of 32 shots.

5.  The Caps seem to be slipping in their road possession numbers. They rank 11th in overall Corsi-for at 5-on-5 (50.73 percent), owing to some sluggishness in their Corsi-against per 60 minutes, which ranks 13th.

No team in the NHL has a leading team scorer with fewer points than New Jersey’s Taylor Hall (11-20-31, tied with Vancouver’s Bo Horvat and Henrik Sedin, and Buffalo’s Kyle Okoposo in total points). Not that this has been entirely Hall’s fault, he has missed ten games this season to knee and lower body injuries. Still, even the change in scenery from Edmonton (the club that drafted him first overall in 2010) to New Jersey has not been the tonic to lift him to the top- echelon status of scorers suggested by his draft rank. Hall has yet to post a 30-goal season, and he has topped the 65 point mark just once (27-53-80 with the Oilers in 2013-2014). His 11 goals in 39 games is a pace (0.28 goals per game) that threatens to be his lowest goal scoring pace of his career (0.26 with Edmonton in 2014-2015). Hall has just three goals in his last 21 games, although seven of his 11 goals this season have been scored on home ice. He is 1-1-2, minus-1, in six career games against Washington.

One of the issues that has sailed under (or past, or been blocked by) the radar in the Capitals’ success is how snake-bit Nate Schmidt seems to be shooting the puck. Of 183 defensemen with 25 or more shots on goal this season, Schmidt is tied for 136th in shooting percentage (2.4 percent on 1-for-42 shooting). And perhaps he is not really snake-bit because frankly, it is not an outlier result. In his last three seasons, including 41 games of this one, his shooting percentage by season were 2.5, 2.5, and 2.4 percent. That’s four goals on 162 shots. He has never been a particularly prolific goal scorer from the blue line, dating back to his days with the University of Minnesota (he had ten goals split between Minnesota and the Hershey Bears in 48 games in 2012-2013), but it would be nice to get a little more jolt out of Schmidt given how active he is from the blue line. Schmidt does not have a point in nine career games against the Devils and is a plus-3.

This is the last game the Caps will play until January 31st. It would be nice to go out on the All-Star Game break with a win, but the other side of that coin is that this is the fourth game in six days for the Caps, and they looked to be running on fumes as the game against Ottawa wore on the other night. Add to that the stifling sort of approach New Jersey brings to the rink, and this has the potential to be a very frustrating game. And on top of that, you have one goaltender with a lifetime GAA under 2.00 against the Devils (Braden Holtby: 1.91) and another goaltender who is going to be looking to bounce back after allowing three goals on 12 shots in 20 minutes before being pulled in his last outing (Cory Schneider against Los Angeles), and it might be “first to ‘1’ wins”... or maybe two.

Posted by The Peerless at 5:49 PM No comments: