Dynamic Presence and "Using the Rink"

Today, the subject of Troy Brouwer and his ability to affect a presence in front of the opposition’s net has received some attention. That kind of generosity Brouwer provides a goaltender in giving him a close and personal view of his backside is paying demonstrable net dividends for the Caps in the form of goals on shots the goalie cannot see.

But there is more to this than merely “being there” in front of the opponent’s net, there is the matter of “getting there.” And that is what we will refer to as “dynamic presence.” It was on full display on the Caps’ first goal in last Saturday’s 7-1 win over the Detroit Red Wings. Folks probably remember the Mike Green one-timer, and if they read the fine piece by Neil Greenberg in today’s Capitals Insider in the Washington Post, they will see how Brouwer’s presence eliminated goalie Ty Conklin’s sight line to the shooter.

But there is more to this goal, and that takes place before the shot, and it is how the Caps “used the rink” to spread the defense while Brouwer angled himself into a screening position. It all came together when Mike Green ended up with a clear look from the top of the left wing circle. Watch the video…

Here is how it unfolded, piece by piece… 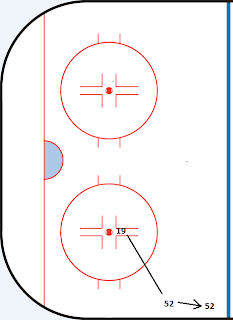 1.  Nicklas Backstrom wins the faceoff to the left wing wall, where Mike Green collects the puck and eases back to the blue line. 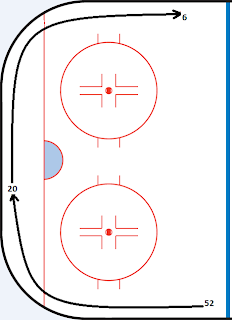 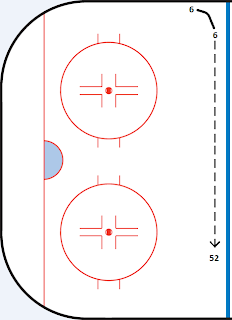 3.  Wideman completes the circle, sending the puck across to Green at the left point. 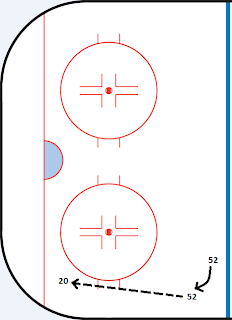 4.  Green drops down and slides the puck to Brouwer, who has come out from behind the net to the low left corner. 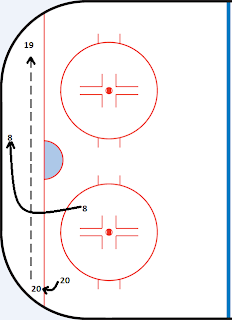 5.  Brouwer circles, and as he does so to send a pass to Nicklas Backstrom in the other corner, Alex Ovechkin slides down from a position waiting for a shot to a spot below the goal line, 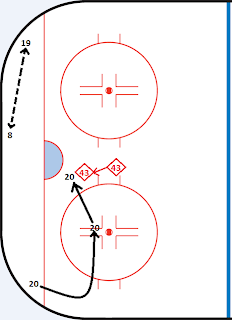 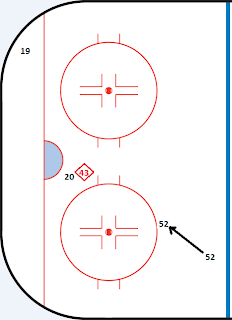 7.  With Brouwer having gone to the net and Helm sliding down to prevent a centering pass from Backstrom, Mike Green fills the void left by Helm and jumps into the space at the top of the left wing circle. 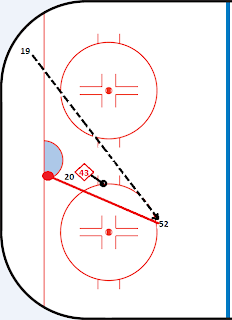 8.  Backstrom has a clear passing lane to Green and uses it.  Green wastes no time shooting the puck, and with Brouwer in screening position on goalie Ty Conklin with no defender high on that side of the ice, it is an opportunity Mike Green does not waste.

The Caps used the whole rink to spread the defense. And Brouwer’s active play not only established a presence, but his hustle out of the corner charging to the net pulled a defender away from a part of the ice that a dangerous shooter would fill.

A similar set of actions by Brouwer was also the subplot to the second Green goal...

In this one, Dennis Wideman and Alex Ovechkin were credited with the assists, but the last stages of the play were initiated by Brouwer from behind the net. It is his pass from the end wall finding Wideman at the left point that was then converted to a pass to Ovechkin and one across the ice to Green – while Brouwer was circling out to get in screening position – that got the whole thing started.

It isn’t just about planting yourself in front of the goalie and keeping on your skates while getting abused, although that is what the Caps have too often lacked on the power play.  It is also about the things that one does to get there – being active and making the defense aware of your presence, forcing them to defend and perhaps taking them out of position to open shooting lanes – that creates the sort of dynamic presence that leads to goals.
Posted by The Peerless at 7:10 PM 4 comments: