The Peerless Prognosticator is ON THE AIR!!! -- Game 24: Canucks at Capitals, December 2nd

The Washington Capitals return home from their brief, if fruitless road spin up to Toronto on Saturday to host the Vancouver Canucks on Tuesday night at Verizon Center.  The Caps start December trying to get out of the rut in which they spun their wheels in November.  Looking at the schedule gone by, it was three losses followed by three wins.  Then it was two losses followed by two wins.  A couple of one-goal losses followed, then the month wrapped up with a couple of blowouts, one win and one loss.  It made for a 6-6-2 month of November.  The Caps were 4-4-2 in one-goal games overall, 2-2 in extra time games (all settled in overtime).  They were outscored 42-38.  On special teams they had a 33.3 percent conversion rate on power plays (11-33) and a 75.7 percent kill rate when shorthanded (28-37).  It was pretty much a "meh" month for the Capitals.

On the other hand, Vancouver seems to have awakened from an early-season slumber.  The Canucks were 4-3-0 when they hosted Washington on October 26th.  Starting with their 4-2 win over the Caps, Vancouver is 12-4-1 since that start.  Over those 17 games they have outscored opponents by a 51-39 margin.  Their special teams are not particularly special – an 18.8 percent power play (9-for-48) and an 84.3 percent penalty kill (43-for-51).  What they have done very well is win the close ones.  In their last 17 games, Vancouver has been involved in seven one-goal decisions.  They are 6-0-1 in those games.

Another thing they have done, which you might have figured out, is avoid lengthy stumbles.  The Canucks have not lost consecutive games in this 17-game stretch, a fact worth pointing out because they did lose to the Red Wings in Detroit, 5-3, in their last contest this past Sunday.

At an individual level, fans would certainly know the Brothers Sedin, Daniel and Henrik.  Nick Bonino is another matter.  A former sixth-round draft pick of the San Jose Sharks, Bonino is on what for him is a tear.  He is third on the team in points (19), behind the Sedins, and is tied for the team lead with a plus-10.  Bonino gave some hints at such production capability when he finished last season in Anaheim with 22 goals and 49 points in 77 games with the Ducks.  While he has maintained a decent points pace lately, Bonino has slipped in the goal-scoring category.  He comes into this game with a ten-game streak without a goal.  In five career games against the Caps he is 1-1-2, minus-1.

As for the Sedin brothers, there they sit, one-two in the Canucks’ scoring rankings (22 for Henrik, 21 for Daniel). Each has a power play goal this season, each has eight power play points.  Daniel averages 19:14 in ice time per night, while Henrik averages 19:13.  Thirteen times in 24 games, both recorded points.  Only six times this season (all in November) has the pair been held off the score sheet entirely. Vancouver is 4-2-0 in those games.

Here is how the teams compare, numbers-wise: 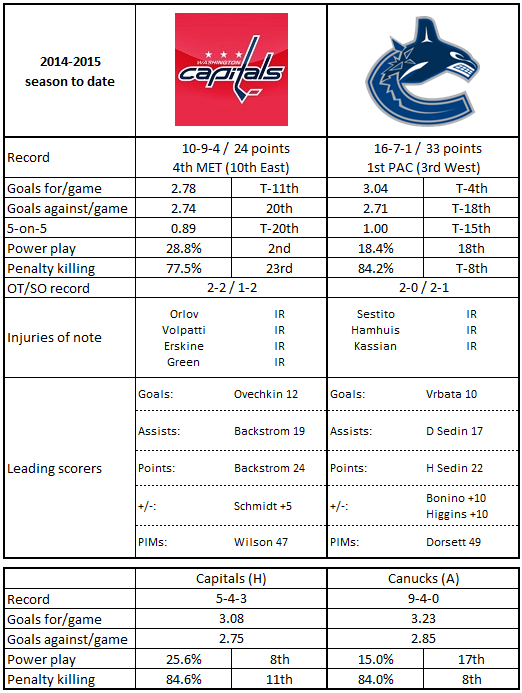 1.  Vancouver will test the Caps' attention to possession.  The Canucks rank fifth in shots on goal per game (31.3), and they have been at 30 or more in eight of their last nine contests, going 6-2-1.  They are 13-4-0 overall when hitting or surpassing the 30 shot mark, including their 4-2 win over Washington in October when they outshot the Caps, 34-22.

2.  Vancouver is one of only two teams remaining not to have lost a one-goal decision in regulation time (Anaheim is the other).  Their .875 winning percentage in one-goal games is second best in the league (New York Islanders: .909).

3.  Vancouver will test the Capitals’ defense at full strength.  Only Dallas (53) and Tampa Bay (57) have scored more goals at 5-on-5 than the Canucks (50).  On the other hand, their defense can be tested as well.  Their 50 goals allowed are surpassed by only four other teams (Colorado, Dallas, Columbus, and Edmonton).

1.  Now 23 games in to the 2014-2015 season, Washington is still without a winning streak of longer than three games.  It is the deepest they have gone into an 82-game season without a longer winning streak since 2007-2008, when they posted their first four-game streak in Games 45-48.

4.  Denying opponents shot opportunities is not a rock-solid indicator of success.  The Caps have limited opponents to 27.1 shots per game, fourth fewest in the league.  And, they have outshot opponents 15 times in 23 games, yet they have just a 5-7-3 record in those games to show for it.  When holding opponents to 25 or fewer shots and outshooting them, the Caps are just 2-2-3 with one win coming in regulation (3-1 at Calgary on October 25th when they outshot the Flames, 30-21).

5.  The Caps have parceled out ice time rather evenly among defensemen.  Of the top five defensemen in even strength time on ice per game, the range is from a low of 16:43 (Karl Alzner) to a high of 18:57 (Brooks Orpik).  Only Nate Schmidt among defensemen playing in at least five games is under 16 minutes (14:38).

No Vancouver defenseman has as many as ten points yet this season. Alexander Edler leads the club with eight points (3-5-8).  It is part of a five-year slide in points per game for Edler, who finished the 2010-2011 season with 33 points in 51 games (0.65 points per game), only to see it slide to 0.33 points per game so far this season.  He has just one point (an assist) in his last ten games and is without a goal since potting one in a 3-2 win over San Jose on November 6th.  He does seem to have reversed one poor number, though.  After finishing minus-39 last season, dead last among 303 defensemen (by ten points behind Buffalo’s Mike Weber at minus-29), he is plus-5 so far this season.  He has not finished a season in plus territory since a plus-13 in 2010-2011.  In seven career games against the Caps he is 4-1-5, plus-2.

The pair of Nicklas Backstrom and Alex Ovechkin is relied upon for a lot in the offensive end.  Yet, Backstrom is tied for 37th in even-strength scoring (13 points), while Ovechkin is tied for 53rd (12 points).  The Caps are tied for 18th in 5-on-5 goals scored; they are tied for 20th with a ratio of goals scored to goals allowed at 5-on-5 of 0.89.  These are not coincidences.  These are things that have to change, or the Caps are going to find themselves slushing around in 10th place or so in the East all season, on the outside looking in at the playoffs.  The Backstrom/Ovechkin pair has to be more productive at even strength.  Period and point blank.

Vancouver is hot, the Caps are not.  Add in the fact that the Caps are not an especially successful team against Western Conference opponents (4-4-2 against the Western Conference, 2-3-2 against the Pacific Division, including a 4-2 loss at Vancouver on October 26th), the fact that old nemesis Ryan Miller is likely to be in goal (career vs. Caps: 16-12-3, 2.49, .917, 3 shutouts), and this looks like a grim task for the Caps.  The Caps have won two of their last three meetings against the Canucks at Verizon Center, though.  The fact that the Caps, entering Tuesday night’s games, are “only” two points behind the New York Rangers for the last playoff spot in the East is something of a mirage.  They have yet to find any traction, any truly sustained stretch of good play that translates in to a winning streak or consistently winning play.  It can get late right quick unless the Caps find a way to start stringing wins together.  Starting to do so against a hot opponent is as good a place as any to start.

Posted by The Peerless at 6:02 PM No comments: