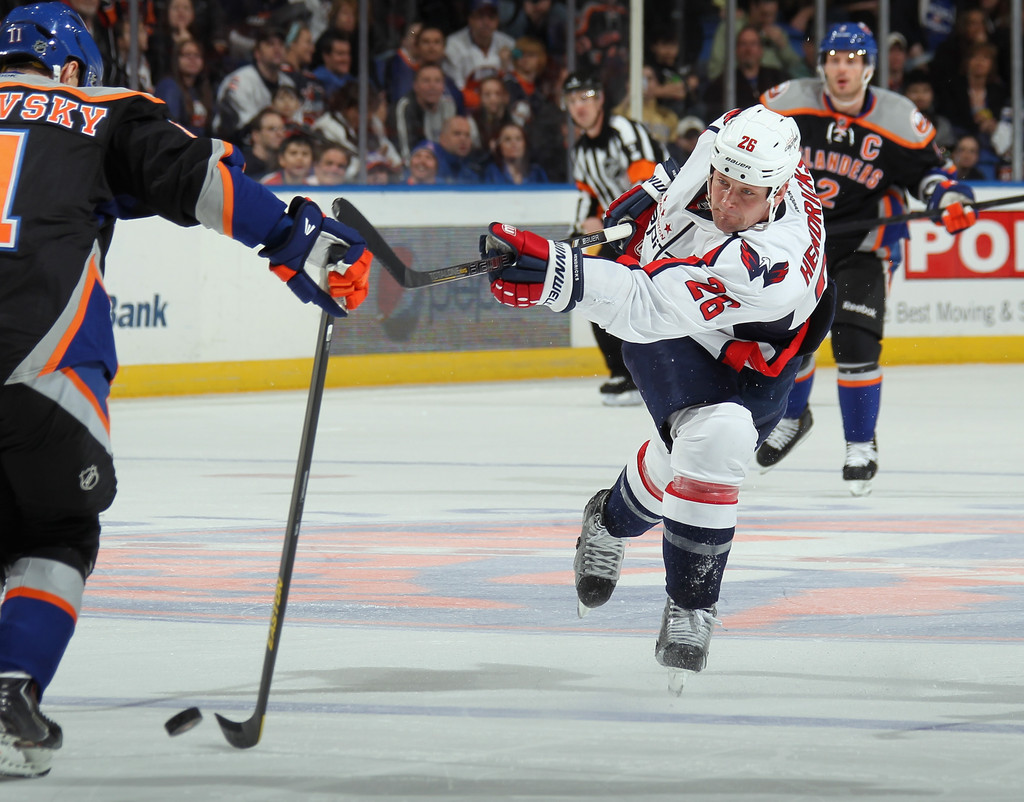 "It’s not the years, honey, it’s the mileage"

Matt Hendricks is one of those guys you instinctively root for.  He wears his emotions on the ice, leaves everything he has to give out there, is fearless in standing up for his teammates, and does fine work in the community off the ice.  He also happens to have a freakish skill in the trick shot phase of the game and chips in his share of offense as a fourth-liner.  He is never going to get any Hart Trophy votes, but you want him by your side when you take the ice.

Then there was his ornery index.  In his first 22 games he recorded 44 penalty minutes and four of his fighting majors, three of them coming in the space of consecutive games, two in a 4-2 loss to Winnipeg on January 22nd and another on January 24th in a 4-1 loss to Montreal.  In his last 26 games he logged 29 penalty minutes and three fighting majors.  His ice time suffered a bit as well.  In his first 22 games he averaged twelve and a half minutes a game.  Over his last 26 games that dropped to 11 minutes per game.

The outcomes for Hendricks really did reflect his outputs, at least as far as his underlying numbers are concerned.  Among the 13 Capitals forwards playing in at least 20 games for the club in the 2013 season Hendricks was last in plus-minus on ice per 60 minutes at 5-on-5.  He was 12th in PDO (sum of on-ice shooting percentage and on-ice save percentage), 10th in on-ice Corsi.  One does not expect these numbers to rank highly for a fourth-liner, but they did represent a drop in ranking from the previous year when he was 11th among 13 forwards playing in 40 or more games in plus-minus per 60 minutes at 5-on-5, 11th in PDO, and 9th in on-ice Corsi (all results from behindthenet.ca). 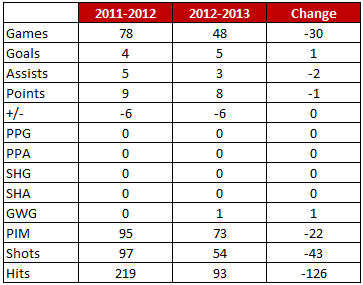 Odd Hendricks Statistic… “Two.”  On two separate occasions Hendricks recorded two fights in a single game – January 22nd against Winnipeg and March 16th against Boston.  The Caps lost both games, 4-2 to the Jets and 4-2 to the Bruins.

Game to Remember… March 2nd at Winnipeg.  The Capitals needed a lift… badly.  Coming off a 4-1 loss in Philadelphia to close the month of February, the Caps found themselves in last place in the Eastern Conference, six points behind both Carolina and Winnipeg for eighth place in the conference.  The Caps had an opportunity to take a bite out of one of those teams when they visited Winnipeg on March 2nd.  The teams skated to a scoreless first period, but midway through the second John Erskine let loose with a bomb from the left point that nailed Jets’ forward Blake Wheeler in the knee, dropping him to the ice.  With Wheeler unable to get to his feet, the Caps had what amounted to a man advantage.  The puck made its way to the stick of Mike Ribeiro in the right wing faceoff circle.  Ribeiro dangled the puck, pulling Bryan Little out of position.  Hendricks took advantage of the situation by heading down the slot behind Little.  Ribeiro found him for the tip-in and what would be the game-winning goal in a 3-0 win.  It was Hendricks’ only game-winning goal of the season.

Game to Forget… February 1st vs. Philadelphia.  It was one of those games where you have to do the ugly part of your job.  As the first period was winding down in a scoreless game, John Erskine nailed Flyer forward Wayne Simmonds with an extended elbow right in the nose.  There was no penalty called on the play, but the Flyers were not waiting to extract their pound of flesh.  When the teams lined up for the ensuing puck drop, Hendricks was on ice for the Caps, Zac Rinaldo – he of the 15 fights in the 2011-2012 season – was sent out by the Flyers.  Before the puck could be dropped (in fact, the linesman was about to toss Max Talbot out of the circle for a violation) Hendricks and Rinaldo went at it.  Both players received fighting majors, and for their trouble in starting the kerfuffle before the puck drop, both received game misconducts.  It was Hendrick’s shortest stint of the season – four shifts and 2:23 in ice time.  The Flyers won, 3-2.

Post Season… Only two Capitals who played in all seven games finished without a point to show for it.  Eric Fehr was one, Matt Hendricks was the other.  One could argue that he did play adequate defense, what with only three goals scored against the Caps in the series when he was on the ice.  But the Caps scored only one goal in the entire series when he was on the ice.  This is a continuing refrain for the Caps in the playoffs, a soft underbelly of weak scoring on the third and fourth lines.  Jay Beagle had the only point from the fourth line in the series.  For Hendricks, it extended a long stretch of post-season frustration.  He is 1-1-2, minus-7 in 34 career playoff games.

Emotion is a big part of sports, both from players and fans alike.  But sentimentality is not.  Successful teams do not have a conscience when making evaluations about their roster and their future.  The question heading into this off-season for Matt Hendricks is whether, at age 32 on opening night of the 2013-2014 season, has enough left in the tank to provide that energetic presence he has provided to the Caps over the last three seasons.  Or, is it really the mileage?  Has the fire that burned twice as hot in Hendricks lasted half as long?  Hendricks did not have a very good second half or playoff record, even by the standards of his position and role.  That has to be disquieting for the club as they evaluate the benefits of re-signing Hendricks to a new contract (he is an unrestricted free agent).  One thing is certain.  Whoever gets Hendricks will get all he has to give.  It just might be that there has been so much given, there might not be a lot left.