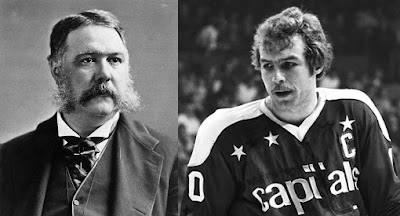 Imagine a President of the United States who came to office upon the death of his predecessor.  It was a struggle for him, reluctant as he was to exercise the powers of the office as his predecessor was struggling to recover from an assassination attempt.  Add to this his being attached to machine politics in New York before becoming President, and he came to office under difficult circumstances.  Things did not improve much upon his assuming office, contending with warring factions in his own party, an unfinished agenda of his predecessor, and his own health problems.  He served only the remainder of his predecessor’s term.  He might be more famous for his “role” in a movie than he is for having been President.  He is Chester A. Arthur, 21st President of the United States.

If there is a parallel in the history of the Washington Capitals, it might be a player who, from a Caps fans’ perspective, might remembered for having played for perhaps the team’s most bitter rival at the time, who came to the Capitals in as part of a trade that sent the first overall pick in the draft to that rival, who captained the team but who lasted barely a half season before moving on.  And, he might be better known for his “role” in the hockey media than for anything he did with the Caps, or as a player for that matter.  He is Bill Clement.

Born in Vermont and raised in New York, Chester A. Arthur took a road that would be recognizable to those who look at the history of American presidents.  A Phi Beta Kappa graduate of Union College, he went into teaching and eventually found himself studying law before moving to New York City.  It was not long thereafter than he began his involvement in Republican Party politics.

After serving in the Civil War and holding a number of administrative positions during the conflict, Arthur straddled the divide between the parties, supporting ex-Governor Edwin Morgan’s run for the United States Senate, support that led him to be hired by a Republican operative (Thomas Murphy) who provided services to the Union Army during the Civil War, but who also maintained a relationship with William Tweed of the New York Tammany Hall organization of the Democratic Party.

His efforts on behalf of the political machine brought him to the attention of Roscoe Conkling, a congressman who was elected to the Senate in 1867.  Arthur became attached to Conkling’s rising star, and he became chairman of the New York Republican executive committee.  The Conkling “machine” was one of growing influence and supported Ulysses S. Grant in the election of 1868.  As this was going on, Arthur was becoming more involved in the back office tasks of politics, helping the machine run smoothly and serving as an appointed official with machine help.  Finally, Arthur, who had operated largely anonymously in Republican politics, was appointed Collector of the Port of New York by Grant in 1871.

Arthur held the office for two four-year terms, the second the product of wheeling and dealing between Conklin and Grant.  That job came into the crosshairs of the Rutherford B. Hayes administration, which promoted civil service reform and took aim at the Conkling machine.  Arthur survived the effort until Congress was in recess in 1878, and Hayes replaced him with a recess appointment.  Arthur returned to working for Republican causes and the Conkling faction that became known as “Stalwarts.”

That led to the 1880 Republican nominating convention in which the “Stalwarts” supported Grant in his effort to win a third term in office against a group supporting James Blaine, known as “Half-Breeds.”  The sides were in stalemate through almost three dozen ballots until the convention looked to a dark horse compromise candidate – James A. Garfield – who was a member of neither faction.  Winning the support of Stalwarts with placing Arthur on the ticket, Garfield won the nomination on the 36th ballot.

Garfield won the general election, but he was felled by an assassin’s bullet just 120 days into his term.  While two months went by with Garfield trying to recover from his wounds, Arthur was caught in a constitutional trap, since there was no provision for how the duties of the office would be fulfilled if the President was incapacitated.  He was reluctant to fill the vacuum, and the executive branch of government was more or less on hold until Garfield passed away in September 1881.

Arthur, perhaps unsurprisingly, had a very uneven experience as chief executive.  He struggled with his cabinet, one that was appointed by Garfield, but despite being very much a child of and proponent of the spoils system, signed the Civil Service Reform Act (perhaps in response to a scandal in the Post Office).  On the other hand, Arthur could never get a handle on fiscal policy, unable to manage the surplus built after the Civil War and how to balance the Federal budget.  He was unable to navigate effectively the differences between those who advocated a cut in tariffs to reduce the deficit and those advocating for more spending on public improvements.  His administration won successful enactment of a comprehensive immigration law, but not without considerable difficulty.  Arthur did win some victories in expanding the Navy and in Civil Rights that helped balance the ledger of success in his administration.

Arthur prepared to run for re-election in 1884, but he found that the factions that existed before his taking office were still battling.  Without a base of solid support in either faction and confronting his own health issues, he ran a lackluster effort as James Blaine won the Republican nomination.  Less than two years later, his health issues caused him to fall ill, and following a cerebral hemorrhage, he passed away on November 18, 1886.

Bill Clement was a second round draft pick of the Philadelphia Flyers in 1970.  After a year with the Quebec Aces in the AHL, he split time in the 1971-1972 season between the Richmond Robins of the AHL and the Flyers.  A year later he was a full-time Flyer, and a year after that he was a member of a Stanley Cup champion.  He and the Flyers won another Cup the next season, but shortly after the celebration died down, he was traded to the Caps on June 4, 1975 with Don McLean and the Flyers’ first round pick in the 1975 Amateur Draft for Washington's first round choice in the 1975 Amateur Draft.

Clement came to a club that had just completed its inaugural season, having posted the worst – still the worst – record in NHL history, 8-67-5.  He came to a team that was missing 19 players who dressed in that inaugural season and that would dress 17 players, including Clement, who did not play for the Caps the previous season.  To that add the fact that Clement was installed as captain and that he was coming from a Stanley Cup champion to a team one year removed from an ugly year, and it was a difficult situation.

It did not get better as the second-year Caps started the season.  They lost their first five games and were winless in their first nine contests.  It did not get much better.  When the Caps lost to the New York Islanders, 5-2, on January 21, 1976, the Caps were 3-39-5 and on a pace to finish with fewer wins than they had in their inaugural season.  The following day, Clement was traded to the Atlanta Flames for Gerry Meehan, Jean Lemieux and a first round pick in the 1976 Amateur Draft, his record complete with the Caps showing 46 games played and a scoring line of 10-17-27, minus-30.  Even having appeared in just 46 games, Clement finished tied for ninth on the club in goals and tied for eighth in points.  On the other hand, the Caps did improve after his departure (these things being relative) with a record of 8-20-5 to finish 11-59-10 for the season.

Clement went on to finish the season with the Flames and played another six seasons with the organization, including their first two years in Calgary when the franchise moved from Atlanta.  It would be his post-NHL career for which he is best remembered, though.  He became a fixture as a television analyst for hockey and participated in broadcasts of at least one Stanley Cup finals game for 19 consecutive years, from 1986 through 2004.  Only the league lockout interrupted the streak, resuming for three more years after the lockout was settled.

Chester A. Arthur was a President of mixed accomplishments, serving only the uncompleted term of his predecessor, was in many respects the product of machine politics, and who might be remembered more for having a fictitious school named after him in the movie, “Die Hard with a Vengeance (the school is actually the Alexander Humboldt School/PS115 in Washington Heights, New York).”  Bill Clement was a Capital who wore the uniform and served as captain for barely half a season, who was the product of the system of a bitter rival, who had decent personal numbers for a struggling team, and who might be remembered more for having a long career as a television analyst after his playing days were over.  You could say that Chester A. Arthur and Bill Clement had similar histories in their comings and goings to and from Washington.  But Arthur had the better playoff beard.
Posted by The Peerless at 8:00 PM No comments: