The Peerless Prognosticator is ON THE AIR!!! -- Game 75: Wild at Capitals, March 22nd

The Washington Capitals open the weekend phase of their four-game home stand by hosting the Minnesota Wild on Friday night at Capital One Arena.  While the Caps dropped a 5-4 overtime decision to the Tampa Bay Lightning on Wednesday night to open the home stand, they will take a nine-game points streak on home ice (7-0-2) into this contest.

The Wild are struggling to stay above water in the Western Conference standings.  Through Wednesday’s games, they were sitting one point behind the Arizona Coyotes for the second wild card spot in the West.  Minnesota has had a difficult time of it lately going 2-4-3 in their last nine games overall, although they do have a 5-1-1 record in their last seven road contests.

Minnesota has had some success as a road team this season.  While they have the fifth-best road record among Western Conference teams, they are only six points behind the conference-leading St. Louis Blues with two road games in hand.  They have done it by being a reasonably good defensive team, the 101 goals allowed on the road being the fourth-fewest among conference teams.  They have struggled some in the offensive end, though, the 100 goals scored tied for ninth among teams in the West.

Zach Parise leads the Wild in goals (15) and points (33) on the road this season.  Now in his 14th season, evenly split in years between the Wild and the New Jersey Devils, Parise is among the most efficient offensive players in Wild history.  He ranks third all-time in goals scored (165), eighth in assists (168), and fourth in points (333), despite having dressed for only 442 games with the club (13th).  What he has added this season that he did not have in his previous six seasons with the Wild is durability.  Parise has appeared in 72 of the Wild’s 74 games this season, 30 more than he dressed for last season, and he seems likely to surpass the 74 games in which he appeared for the Wild in 2014-2015.  He did appear in all of the team’s games in his first year in Minnesota, but that was the shortened 2012-2013 48-game season.  Parise has been streaky of late.  Over his last 19 games he has had points streaks of three games (twice, including coming into this game on one) and four games, and he has had streaks without a point of three and four games.  In 33 career games against the Caps, Parise is 8-16-24, minus-3.

If Zach Parise represents the old guard, then perhaps center Luke Kunin represents the new order.  The second year center is the youngest skater to appear for the Wild this season, having turned 21 years old last December.  Kunin was taken by the Wild with the 15th pick overall in the 2016 entry draft (the Auston Matthews/Patrik Laine draft) out of the University of Wisconsin.  Lunin spent another year with the Badgers, posting 22 goals and 38 points in 35 games, before starting his pro career with 12 games that season with the Iowa Wild in the AHL.  Last season he split time between Iowa and Minnesota, and he started this season in Iowa.  He was recalled by the big club in early December when Mikko Koivu was injured.  Kunin has dressed for 41 games this season, going 5-10-15, minus-3, in 41 games.  Despite appearing in only those 41 games, Kunin is in the top-30 among rookie point getters.  His points frequency has picked up with time, going 4-6-10, plus-3, in his last 20 games.  He did not record a point in his first and only appearance against the Caps to date. 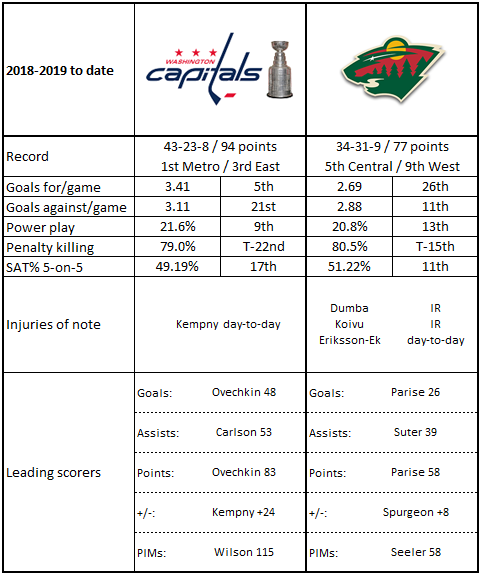 1.  Minnesota is struggles on offense at even strength.  Their 148 even strength goals this season overall ranks 27th in the league.

2.  The Wild are even worse on offense in overtime.  They have three overtime goals in 74 games.  Only Colorado (two) and the New York Rangers (one) have fewer.

3.  Speaking of overtime, the Wild have gone to extra time 13 times this season.  Only twice have they done so on the road, and they lost in the freestyle competition each time, those coming one month apart in Buffalo (5-4 on February 5th) and in Nashville (5-4 on March 5th).

4.  No team in the league has lost more games when out-shooting the opposition than Minnesota (20, tied with Buffalo, Columbus, Carolina, and St. Louis).

5.  Only two teams have fewer wins when scoring first than the Wild (17) – Detroit (15) and the Rangers (14).  And, when allowing the first goal, the Wild have the seventh-highest number of losses in regulation (25).  Always a good predictor of results, who scores first seems especially true of the Wild.

1.  The Caps have the fewest losses in regulation in the league when out-shooting opponents (seven).  Having out-shot opponents only 31 times in 74 games (20-7-4) contributes to that result.

2.  Washington has yet to allow a goal at 4-on-4 this season.  They one of three teams that can make that claim (Pittsburgh and Colorado are the others).

4.  When the Caps scored in the final minute against Tampa Bay on Wednesday night, it was only the second 6-on-5 goal scored by the Caps this season.  Only Montreal (one), Tampa Bay (one), and Arizona (none) have fewer.

Bruce Boudreau, by contemporary standards, got comparatively late start as a first time NHL head coach, taking the reins of the Washington Capitals at age 53.  But despite the late start, Boudreau ranks 24th in all-time regular season wins among NHL coaches (537), and he could pass Billy Reay for 23rd place (542) before season’s end.  With 238 games behind the Wild bench in his career there, he ranks third in all-time franchise games coached, trailing Jacques Lemaire (656) and Mike Yeo (349).  His 128 wins to date trail Lemaire (293) and Yeo (173).  The odd thing about his career, though, is that Boudreau is also in the top five coaches in Anaheim Ducks history in games (352), trailing only Randy Carlyle, who had 598 games in two separate stints sandwiched around Boudreau’s tenure.  His 208 wins there trail only Carlyle (320).  And, his 329 games coached for the Caps ranks third in team history, trailing only Bryan Murray (672) and Ron Wilson (410).  His 201 regular season wins trail only Murray (343) and Barry Trotz (205) among the 18 coaches in Capitals history.

However, there is that 43-47 postseason record that has dogged Boudreau over his career, too.  He has reached the postseason in ten of his previous 12 NHL seasons, but he has advanced from the first round as a head coach only four times, the last of which came in 2015, when his Anaheim Ducks lost in the Western Conference final.  That might have been a particularly bitter postseason for Boudreau, whose Ducks swept Winnipeg in the first round before dispatching the Calgary Flames in five games in the second round.  Anaheim ran into the Chicago Blackhawks in the third round and lost at home in Game 7, 5-3, after falling behind 4-0 before the game was 34 minutes old.  Boudreau is 2-6-3 in 11 games coaching against the Capitals.

The last three seasons: 7-14-21.  That is the progression in goals scored by Tom Wilson, who by now is a given as a critical element in the success of the Washington Capitals.  He has, if not a unique, than a rare combination of production and orneriness.  With 56 career goals and 921 penalty minutes, he is one of only 35 players in league history to record at least 50 goals and at least 900 penalty minutes in his first six seasons.  He is the only player in the league to have done it since the 2004-2005 dark season.   And, he could be an award winning real estate agent with all the properties he has claimed in the heads of other teams and their fan bases.  Here is an odd Wilson fact to impress your friends.  Nine times this season, Wilson has recorded a goal and taken at least one penalty.  The Caps have won all of them.  The Caps are 21-4-0 in the 25 such games Wilson has had in his career.

The Caps have had an intense week with a pair of hard-fought games against the Tampa Bay Lightning.  It would be not be unexpected for the team to exhibit a bit of a letdown against a club they do not face often and against which they do not have a particularly noteworthy rivalry.  Even if you are thinking of the Caps-meet-former-coach angle, consider that among the players dressing for the last game Bruce Boudreau coached in Washington, back in November 2011, only four players remain (Nicklas Backstrom, John Carlson, Dmitry Orlov, and Alex Ovechkin).  However, the Caps still have only a three-point lead in the division and only five points clear for holding a home ice advantage in the first round of the playoffs.  They still have to wrap up their season series with the Lightning, have two games left with Carolina, and face the Islanders in the season finale.  It means that when two points are available, it is best to take them.