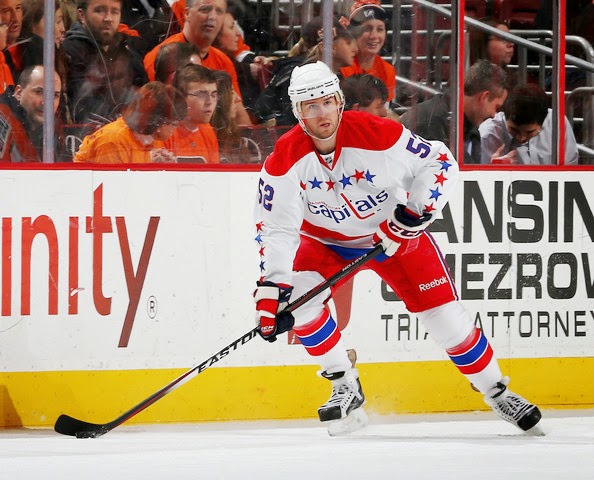 “I'm always making a comeback but nobody ever tells me where I've been.”
-- Billie Holiday

From 2007-2008 through 2009-2010 there was no more dangerous offensive defenseman in the National Hockey League than the Washington Capitals’ Mike Green. Over those three seasons he led all NHL defensemen in a number of offensive categories, some by a wide margin:
It is amazing enough that Green led in so many categories over those three years, but what is just as amazing is that there is no clear “second best.” The second highest totals in that list are spread over eight different defensemen. Green, for those three years, with a 68-137-205, plus-69 scoring line, was a dominant offensive force from the blue line.

Then came the injuries and the coaching changes. Over the next three seasons Green played in only 116 of 212 games and had a total scoring line of 23-34-57, plus-8. The injuries – upper body, concussion, ankle, groin, concussion again – took away too many games. The parade of coaches – Bruce Boudreau, Dale Hunter, and Adam Oates – made for too many changes in style that was an especially important factor for a player who controlled a great deal of play with breakouts and passing. He did, however, have a productive year in Oates’ first year behind the Caps’ bench, going 12-14-26 in 35 games. His 0.74 points per game was sixth among all defensemen in the league.

As it is, through all the injuries Mike Green still led the Caps’ defensemen in scoring in five of the last seven seasons and was second once. He is one of only four defensemen in franchise history to score at least 100 goals with the club (103), and he has done so playing in at least 151 fewer games than the other three. He should pass Calle Johansson (113) for third place on the list this season. He is sixth on the franchise list in points by a defenseman (315) and could pass Larry Murphy (344) for fifth place this season.  Green is not only the dean of the defense at this point in his career (longest in terms of service), he is the most among the most accomplished in the history of the franchise.

One thing that might help with respect to Green’s consistency.  Get him a regular partner.  Over the last four seasons he has spent the most 5-on-5 ice time with four different partners (in percentage of ice time):
With two new kids on the block and a new coach evaluating everyone on a fresh canvas, Green might yet have a fifth most-frequent partner.

The Big Question… Is Mike Green destined to remain a Capital?

Mike Green is in his contract year, winding up a three-year deal paying him $6,083,333 a year. With $20.0 million in salary cap space committed to five defensemen in 2015-2016 it seems unlikely that the Caps would be able, even if they were inclined, to accommodate an extension at that salary, let alone a raise. Green’s injury history makes any such investment quite risky as he approaches his 30th birthday (he will turn 30 on about Opening Night of the 2015-2016 season).

If Green was to put up big numbers for the Caps this season, it would complicate things even further. Bigger numbers, more suitors in free agency, the potential for an even bigger payday. As it is, Green has the 11th largest cap hit among defensemen in the league. His comparables by age (26-30) and by caps hit ($5.5-6.5 million) would include:
In terms of roster and cap management, the question might be how Green gets slotted and for how long a term.  The Caps have three defensemen – Carlson, Orpik, and Niskanen – signed through 2017-2018.  The Caps will presumably want to sign Alzner, whose contract expires after the 2016-2017 season to grant him unrestricted free agent status.  Where does Mike Green fit in this puzzle?  Four-and-24 (to use round numbers)?   That would be about $25 million tied up in five defensemen, a substantial share of the salary cap.  Corsi, Fenwick, and zone starts are not the only numbers that will bear watching this season.

Mike Green was part of that first “rebuild” draft class in 2004, the one that included Alex Ovechkin and Jeff Schultz. More than any home-grown player since then, he has seen everything from a Calder Cup championship in 2006 as a prospect in Hershey to sharing time with some poor Caps teams in the early years out of the 2004-2005 lockout to the team’s return to competitiveness to a Presidents Trophy to the current unsettled state of affairs with the club.

Over the last 15 seasons no defenseman for the Washington Capitals has logged more total ice time than Mike Green, more than 11,000 minutes worth. It might be true that he will never fully return to those three amazing seasons that made him the best offensive defenseman of the period. Still, a return to health could provide the opportunity to make him a threat once more. Whether he can put together another 1,500 or so minutes in 2014-2015 will go a long way to determining whether the Capitals can make a comeback to the post-season, whether Green can make a comeback to a level of play approaching what the Caps enjoyed a few years ago, and whether he can come back to the club past this season.

Photo: Elsa/Getty Images North America
Posted by The Peerless at 5:46 PM No comments: