The Peerless Prognosticator is ON THE AIR!!! -- Game 74: Capitals at Red Wings, March 22nd

The Washington Capitals embark on their longest remaining road trip of the season over the next five days, and that starts with a visit to Little Caesars Arena in Detroit to face the Red Wings on Thursday night.

The Caps stretched their lead in the Metropolitan Division to four points on Tuesday night with a 4-3 win over the Dallas Stars, although that margin could be halved again pending the results of the Pittsburgh Penguins game against the Montreal Canadiens on Wednesday night.  It makes every game and every point important as the Caps head into these last few weeks of the regular season.

For the Red Wings, the competitive portion of the season ended some time ago.  They staved off elimination from the postseason when they beat the Philadelphia Flyers on Tuesday night, 5-4, in a Gimmick.  But the Caps could formally eliminate Detroit from the postseason with a win of any kind on Thursday.

The Red Wings have struggled all season, or at least since mid-December, when they won consecutive games in regulation for the last time through Tuesday.  When they beat the New York Islanders in Brooklyn, 6-3, on December 19th for a second consecutive win in regulation, they had a record of 13-13-7, they were fifth in the Atlantic Division and six points behind the New York Islanders for the last playoff spot in the Eastern Conference.  Since then, the Wings are 13-22-4 and are on the brink of elimination.  Worse, after clawing their way back to .500 in standings points (26-26-10) on February 25th, they lost ten in a row (0-9-1) before beating the Flyers in their most recent game.

Scoring has been a season-long issue for the Red Wings, who finished action on Tuesday with the 28th-ranked scoring offense in the league (2.52 goals per game).  Which brings us to Dylan Larkin.  Here we have a player who is an embodiment of the Wings’ problems this season.  With 53 points to lead the club, he has had a hand in almost 30 percent of all the goals scored by Detroit this season.  But until he went 2-1-3 against the Flyers on Tuesday night, he went 17 games without a goal and had just seven points in all (all assists), a period over which the Red Wings went 3-12-2.  That long goal streak might be looked at in the context of this being a disappointing year, goal scoring-wise, continuing a trend in dropping year-to-year production.  After recording 23 goals in 80 games in his 2015-2016 rookie season, Larkin had 17 in 80 games last season, and his 11 goals in 73 games so far this season puts him on a pace to finish with 12 this season.  This has been a brutal season for Larkin in terms of shooting efficiency, his 11 goals on 207 shots translating to a career-low 5.3 shooting percentage.  He is 1-4-5, plus-3, in eight career games against Washington.

Anthony Mantha leads the club in goals so far this season (23) and serves as something of a counterpoint to Larkin.  Both were first round draft picks, Mantha taken with the 20th overall pick in 2013, a year before Larkin was taken with the 15th overall pick in 2014.  However, in the context of their respective development, where Larkin has displayed something of a regression from his rookie season, Mantha has shown steady improvement over the same three seasons.  After hist first season in 2015-2016 in which he played in only ten games with two goals and three points, he skated in 60 games last season to a 17-19-36 scoring line.  Through 71 games this season, he has career highs in goals (23), assists (19, tied with last season’s total), and points (42).  But it is another indicator of how thin the Red Wings’ scoring is that in the 20 games in which Mantha has goals this season, Detroit is just 9-8-3.  He has been in a scoring slump of late, going without a goal in his last seven games and just one assist in that span.  He is 1-2-3, even, in five career games against the Capitals.

Jimmy Howard is now, well…for the moment, the man between the pipes for the Red Wings.  Since Petr Mrazek was traded to the Philadelphia Flyers on February 19th, Howard has 12 appearances over the last 15 games, 11 of them starts.  He has not been especially impressive, though, going 3-7-2, 3.08, .903.  He has faced 31.85 shots per 60 minutes in that span, though, a considerable but not unduly heavy volume.  Still, Howard is a Red Wing who is managing to inch his way up the all-time franchise statistical ladder – third all-time in games played among goalies (455), 3rd in wins (218), fourth in shutouts (23), second in save percentage (.915; minimum 100 games played), seventh in goals against average (2.49).  However, he will also turn 34 years old next week, and this raises an issue with respect to this club.  Howard was drafted in 2003.  In all the time since, the only other goalie drafted by the Wings to appear in more than three NHL games for the club is Petr Mrazek, who is now in Philadelphia.  Howard does have one more year on his contract (with a $5,291,667cap hit), so the club might be interested in these last few games of this season to see what they have in current backup Jared Coreau. 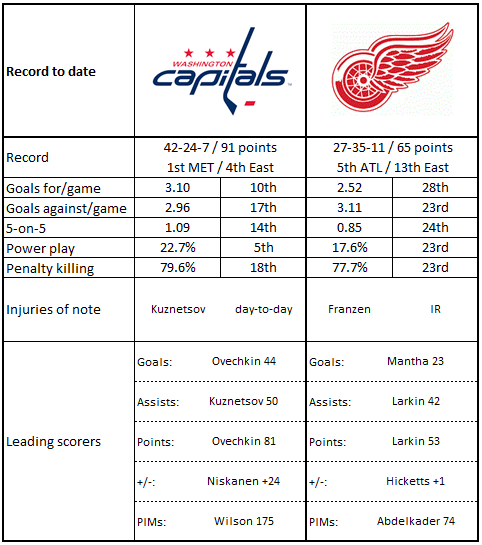 1.  This might end up being a game of two teams who don’t get shots to the net.  While the Caps are last in the league in shots on goal per game (28.9), the Red Wings are not much better, their 30.2 shots per game ranking 27th.

4.  Only two teams have fewer wins when out-shooting opponents than Detroit (10): the Islanders (eight) and Vancouver (seven).  Then again, they don’t out-shoot opponents often, just 29 times in 73 games.

3.  No player in the league has more shorthanded faceoff wins this season than Jay Beagle (121).  How’s that for finding a fact in the back of the closet?

4.  Plus-minus might not be the best measure of, well, anything anymore, but it can’t be good for a playoff contender that the best plus-minus player on the road this season for the Caps now plays in Columbus (Taylor Chorney, plus-5).  OK, so Alex Ovechkin and Matt Niskanen are tied with him but that means they are tied for 100th in the league in that measure.

5.  When John Carlson takes the ice against Detroit, he will become the 19th Capital (and eighth defenseman) to appear in 600 games for the team, tying Bobby Gould for 18th place and one behind Scott Stevens for 17th place in franchise history.

In a franchise history of defensemen that includes Nicklas Lidstrom, Red Kelly, and Chris Chelios, it might be easy to overlook a Niklas Kronwall.  However, Kronwall is among the longest-serving defensemen in Red Wings history and among their most productive.  Now in his 14th season, all with Detroit after being taken by the Wings in the first round (29th overall) in the 2000 entry draft, only Lidstrom and Marcel Pronovost have played more seasons in Detroit and more games for the Red Wings (1,564 and 983, respectively) than Kronwall (865).  He occupies similarly high rankings in other statistical categories among franchise defensemen: goals (79/6th), assists (319/3rd), points (398/4th), game-winning goals (14/T-2nd), power play goals (33/3rd), shooting percentage (6.7/6th among defensemen with at least 250 games played).  Kronwall is the old man on the blue line squad now, although he is still skating more than 18 minutes a game, is tied with Mike Green for the power play scoring lead among defensemen (13 points), second to Green in overall scoring 17 points), and has two of the three power play goals scored by Detroit defensemen this season.  His production has been sporadic of late, though.  Kronwall is 1-4-5, minus-11, in his last 20 games, and he does not have an even strength goal since November 22nd, his only one of the season.  He is 1-6-7, minus-7, in 20 career games against the Caps.

Now, it’s a matter of tuning and preparing.  The Caps are in the last sprint to the finish, and there might be a temptation to look ahead or cut corners in eager anticipation of the playoffs that begin next month.  But success in the second season might be as much making sure things are done the right way and that corners are not cut.  And that is up to head coach Barry Trotz and his staff.  Complicating the matter is the goaltending situation and how that is to be handled.  Braden Holtby’s struggles and Philipp Grubauer’s consistency in the last couple of months has raised the question of whether a change in number one netminder might be warranted.  After all, the story goes, a tandem didn’t hurt the Pittsburgh Penguins last season when Marc-Andre Fleury started 15 games, and Matt Murray got the call in ten others.  This might be the most important issue the coaching staff will have to address over the last few weeks of the season, and how it is handled might be the prelude to a successful run in the playoffs or another in a long history of early flameouts.

This is not the same Detroit Red Wings team that beat the Washington Capitals, 5-4, in overtime last February 11th.  In 19 games since they scored five goals in a game (not including Gimmicks) only once and have scored more than three goals just twice in that span.  And, it is a team that has allowed four or more goals in nine of its last ten games.  That is a really bad combination, one that the Caps must take advantage of early and often.  It might be “Little Caesars Arena” in which the game is played, but the Caps should make this a “pizza night” from a competitor.