The Peerless Prognosticator is ON THE AIR!!! -- Game 62: Penguins at Capitals, February 25th

We are getting to that portion of the season when season series are wrapping up, and teams are wanting to leave an impression with those they might face down the road in the post season.  Such is the case as the Washington Capitals host the Pittsburgh Penguins in the fourth and final meeting of the clubs this season.

Washington has won the first three games of the 2014-2015 series against the Penguins, holding their nemesis to a single goal in 180 minutes of hockey to date while scoring ten goals of their own.  The Caps are 2-1-0 since their last meeting against the Pens on February 17th.  Impressive wins over the Winnipeg Jets (5-1) and the New York Islanders (3-2 in a Gimmick), playoff teams both, were followed up by an indifferent 3-2 loss in Philadelphia to the Flyers.

Pittsburgh also comes into this game with a 2-1-0 record since facing the Caps, a loss to the Columbus Blue Jackets (2-1) followed by wins over St. Louis (4-2) and Florida (5-1).  The consecutive wins by the Penguins represent a breakthrough of sorts.  It is the first time they came out with consecutive wins in regulation since blanking Edmonton (2-0) and Calgary (4-0) almost three weeks ago.

The Penguins might be discovering an important part of their game at the right time.  In nine games to open February, Pittsburgh failed to score on the power play, going 0-for-20.  Against both St. Louis and Florida, the Penguin power play went 1-for-3, Patric Hornqvist doing the honors in each case.  What makes this especially important to the Penguins is that Hornqvist missed 11 games to injury in January, the Pens going 4-4-3 in his absence.  He has three goals in his last two games after scoring just two goals in 12 games after his return to the lineup in late January.  If he is warming up, it could spell problems for the Caps on Wednesday night and for the Metropolitan Division down the stretch.  In ten career games against the Caps, Hornqvist is 2-2-4, minus-3, although he does not have a point in three games against Washington this season.

Evgeni Malkin also has three goals and two assists since he faced the Caps last week, the Pens’ lone goal in their 2-1 loss to Columbus and a pair (including the game-winner) in the 5-1 win over Florida in his last outing.  It was a welcome jolt of offense from Malkin, from the Penguins’ point of view.  After opening the 2015 portion of the season going 4-7-11 in his first nine games, including four multi-point games, Malkin had just one point (a goal) over his next six contests before this recent outburst.  In 28 career games against Washington he is 9-30-39, plus-1, but is without a point in two meetings against the Capitals this season.

Pittsburgh’s defense does not contribute a lot of offense after Kris Letang, but Letang is an impressive contributor.  His 47 point this season equals the combined output of the next three defensemen in the scoring rankings for the Penguins; his ten goals equal the total of the next four Penguins on the list.  It is an impressive comeback for a player who just a year ago was recovering from what was a career-threatening stroke and the discovery of a small hole in a wall of his heart.  His offense is accompanied by a physical edge that seems a bit inconsistent with his average size (6’, 201).  He is third among Penguin defensemen in hits and is one of only 48 defensemen in the NHL (of 285 to have dressed this season) to record over 100 hits (106).  Letang is 4-6-10, minus-14 in 22 career games against Washington, including an assist in three games against the Caps this season. 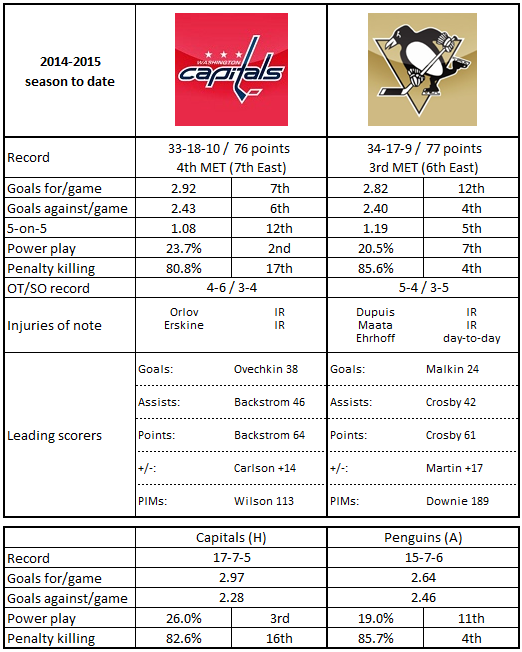 2,  Only two teams have allowed more shorthanded goals than the six allowed by the Penguins this season: Buffalo (8) and Toronto (9).

3.  Pittsburgh leads the league in goals scored in the first period (62).  Their plus-19 first period goal differential is third-best in the league, behind only the New York Rangers (plus-22) and the New Jersey Devils (plus-21).

1.  The Caps are an efficient shooting team.  They rank seventh overall in shooting percentage at even strength (9.0 percent).  Their save percentage at evens ranks sixth (.923), meaning their PDO (or SPSV% in the new NHL advanced stats parlance) is 1013, fifth in the league.

2.  If we told you that Andre Burakovsky and Tom Wilson were the top two forwards in shotattempts/for per 60 minutes among Caps forwards, would you believe us?

3.  Despite the fact that the Caps have allowed 30 or more shots on goal in five of their last seven games, they rank ninth in fewest shots per game allowed (28.8)

For a player who is tied for fifth in points overall and tied for third in assists this season, it seems odd that a question that comes to mind is, “what’s wrong with Sid?”  Sidney Crosby has scored points in bunches this season; he has 16 multi-point games this season (tied for eighth in the league).  What he has lacked is a certain consistency hockey fans have come to expect.  He has been held without a point 24 times in 54 games this season; last season he was held without a point just 20 times in 80 contests.  Of recent concern, his power play scoring has almost dried up.  From January 20th through February 19th, Crosby had one power play point (an assist) in 14 games.  Overall, he is 4-6-10, minus-2, over his last 15 games.  In 32 career games against the Caps, Crosby is 17-33-50, plus-2.

Only four members of the 2012 draft class have played in more NHL games to date than the Washington Capitals’ Tom Wilson, taken with the 16th overall pick in that draft. He happens to rank 13th in that class in NHL goal scored and 12th in points recorded.  Still, it seems as if Wilson’s progress has been something less than expected, at least by Caps fans.  Perhaps part of it is his 264 penalty minutes recorded in 130 games, more than twice as many as the next two players from that class on the penalty minutes list – Edmonton’s Nail Yakupov (74 penalty minutes) and Montreal’s Alex Galchenyuk (71).  And those minutes have been hard earned, what with 115 of them earned in 23 fights over his two seasons in the NHL.  His goal against the Philadelphia Flyers on Sunday afternoon broke a 34-game streak without lighting the lamp.  However, his ice time continues to be managed closely; he has gone 28 games without skating 15 minutes in a game and is averaging just 11:22 this season.  He is without a point in seven games against Pittsburgh in his brief career to date.

The top of the Metropolitan Division is looking like the last five laps of a NASCAR race with cars (or in this case, teams) drafting one another and moving up or back in the pack, depending on the day of the week and who is playing that night.  The Caps can jump past the Penguins into third place in the division with a win, but perhaps more important, they can sweep the series against Pittsburgh for the first time since the 2009-2010 season.  For the Penguins, the Metro has been a struggle.  With seven wins in 22 divisional games, only Carolina (five) has fewer.  We don’t think Pittsburgh will add to that total.

Posted by The Peerless at 9:28 PM No comments: