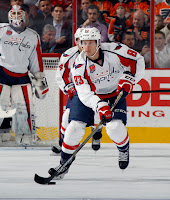 Last season, nine Washington Capital forwards finished in double digits in both goals and assists.  The most surprising member of this group was undoubtedly forward Jay Beagle (10-10-20).  It was a career year for the seven-year veteran.  He set career highs in games played – 62, tying the number he played in 2013-2014.  His ten goals more than doubled his previous high (four, in 2013-2014).  His ten assists were almost twice as many as the six he recorded in 2012-2013.  Beagle was a plus-6, the first time in his career he finished on the plus side of the ledger.  He averaged 12:49 in ice time, another career high.  And for the sixth time in seven seasons, Beagle finished above 50 percent in faceoff wins (fourth season in last five he finished over 55 percent).

Beagle, arriving with the Caps as an undrafted free agent in 2008, has had a career marked by slow and steady, if modest progress over his seven seasons.  Each season he increased his games played from three in his first season to last year’s 62 that tied the career high set the previous season.  His goals rose each season (save for the two he scored in the abbreviated 2012-2013 season).  His assists did not drop in any season except for falling from six in 2012-2013 to five in 2013-2014.   Points, up every season.  Ice time per game was up in every season but for a dip in the 2013-2014 season.

Beagle rounded out his season by finishing with a 56.5 percent faceoff winning percentage (seventh in the league, had he qualified) and averaged 1:51 in shorthanded ice time per game, third on the team among forwards and second highest in his career (2:07 in 2012-2013).   He was also the only player in the league who appeared in more than 60 games, played fewer than 800 minutes, and finished in double digits in both goals and assists.  The career season might have been what convinced the Capitals to extend and for Beagle to accept a three-year/$5.25 million contract extension last June, including a $300,000 signing bonus).

Beagle has an odd career profile.  In the seven seasons he has been in the league, 19 players (including Beagle) have appeared in at least 250 games and less than 3,000 minutes.  Beagle is sixth on that list in goals per game (0.09), eighth in assists (0.09) and seventh in points per game (0.19).  And, unlike many of this cohort who are more known for penalty minutes than points, Beagle has done it with the third-fewest total penalty minutes.

More strangeness… Beagle has been a regular/semi-regular for four seasons now (playing in at least half the games in a season).  Over that span of time the Caps have a record of 111-74-28 when he is in the lineup, 41-32-8 when he is not.  It is not a lot of difference, about five standings points per 82 games, and it is certainly not likely to be entirely attributable to Beagle’s presence in the lineup, but it is something.  Fourth liners’ contributions might be modest; it does not make them insignificant.

Beagle is not an especially noteworthy possession magnet.  He has never had a Corsi-for/on-ice percentage greater than his Corsi-for/off-ice percentage in seven seasons.  Last year was no exception (49.7 on-ice/51.2 off-ice; numbers from war-on-ice.com).  Not that you would necessarily expect anything different for a fourth liner, but he skated 112 minutes of 5-on-5 ice time with Alex Ovechkin last season, and Ovechkin’s Corsi-for was 43.4 percent with Beagle, 54.6 when apart (numbers from stats.hockeyanalysis.com).  Woof.

The Big Question…  Is that dreaded “regression to the mean” a certainty for Beagle?

The weird part – well, one weird part – of Beagle’s season last year was that he started it by going without a point in his first eight games.  That means that on an 82-game pace basis, he played his last 54 games to a 15-15-30 scoring pace.  However, he had only three points in his last 12 games and missed the last 14 games of the season with a shoulder injury.  He did return for the playoffs and had five points in 14 games, right around his points pace for the regular season.

So the question now is what is that “mean” to which Beagle might regress?   His improvement in scoring over the course of his career has been steady.  Consider the following chart, one that depicts his 82-game points splits starting with career game 82 through game 254 (a total of 172 instances): 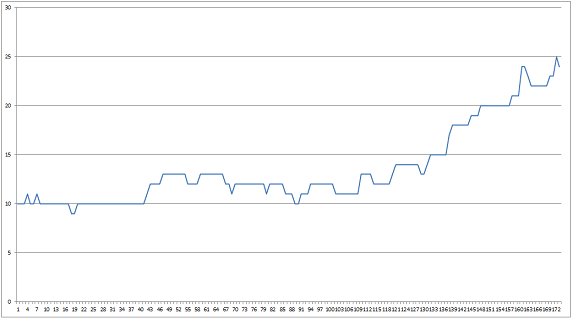 That is quite an example of improvement over time.  Not that Beagle has suddenly become a threat to win the Ross Trophy as the league’s top scorer, but doubling his 82-game scoring pace from his first 82 career games to his most recent 82 games is quite an accomplishment for a player with such modest beginnings.  Can he be a 20-25 point player out of a fourth line position?  Perhaps not, but neither does he entirely lack the potential to contribute offensively.

Jay Beagle is an example of perseverance.  He is an example of something else, too – constant improvement.  The object now will be to sustain this level of performance.  But there is a hint of concern about Beagle going forward.  Despite his being a pretty good story of climbing from modest beginnings to a regular role on an NHL team, he is getting a bit long in the tooth in terms of his likelihood of sustaining this level of performance in his given role, even if he is only just about to turn 30 years of age (October 16).  Let’s consider these parameters for players last season – at least 50 games played, fewer than 900 minutes of ice time, at least eight goals, and at least eight assists.  A total of 23 forwards fit that profile, and only seven of them were older than Beagle.  Of those seven, five of them were forwards with more of a history of point production in their respective careers (Mikhail Grabovski, Stephen Weiss, Joffrey Lupul, P.A. Parenteau, and Vincent Lecavalier) but who slumped due to injury, age, or both.  A career fourth liner is a role that can have a short shelf life for all but a few who fill it.  Beagle has become better at it on a year-to-year basis, and now he has the comfort of a three-year deal to allow him to focus on how it is he can sustain that level of performance or become better still.