We are up to Part V in a look back at the draft performance of the Washington Capitals over the 2001-2010 period.  This look back might be termed, “The Late Show” – the late rounds of the draft, rounds six through nine (the NHL employed a nine round draft in the years 2001-2004, seven rounds thereafter).  This is the territory of the long-shot, players who might have been overlooked or whose path to the NHL is going to be determined more by will and circumstance than their comparative skill levels.

For the Washington Capitals these late rounds have been a mixed bag, the good and the bad.  Over the 2001-2010 period the Caps selected 29 players out of the sixth through ninth rounds.  Of that group, seven have appeared in at least one NHL game, and three of them have appeared in more than 100 games.  Here is the list (ranked by overall selection): 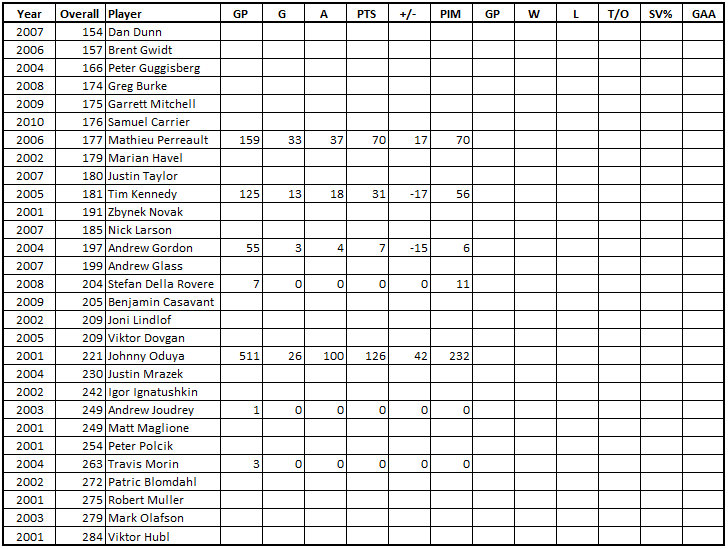 There are a total of 861 games played in the NHL among that group in those four rounds, far more NHL games played than the total of rounds two through five (724).  There is, though, some hidden drama in the Caps’ version of The Late Show.  First there is Johnny Oduya, who is an object lesson in the difference between “drafting” success” and “developmental” success.  Oduya was selected in the seventh round of the 2001 Entry Draft out of Victoriaville in the Quebec Major Junior Hockey League.  Oduya, who was born in Stockholm, Sweden, had just spent the 2000-2001 year in the QMJHL split between the Moncton Wildcats and the Victoriaville Tigres.

In the year after his draft he returned to Sweden to play with Hammarby IF, the team for which he played before coming across to North America to play in the QMJHL.  The team and player could not seem to get on the same page, and Oduya was released from the Caps’ system.  He signed as a free agent with the New Jersey Devils in July 2006 and has since played in 511 regular season games for the Devils, the Atlanta Thrashers/Winnipeg Jets, and the Chicago Blackhawks, averaging a shade more than 20 minutes of ice time per game over his career.  There is also the Stanley Cup on his resume, won this past season with the Blackhawks, with whom he averaged almost 23 minutes of ice time per game.

If Oduya is the one that got away, Tim Kennedy is the one Caps never had, and probably a good thing at that.  Kennedy was selected in the sixth round (181st overall) in the 2005 Entry Draft and was traded immediately (the same day) to the Buffalo Sabres for a sixth round draft pick in the 2006 Entry Draft.  That is the kind of deal that can fly so low below the radar that it crashes into a hillside.  And in 2009-2010 that crash on the hillside might have had a Capitals logo in the wreckage when Kennedy finished 10-16-26 in 78 games for the Sabres in his rookie season, tied for 12th in points among rookies with the likes of Evander Kane and Ryan O’Reilly.

That was Kennedy’s high-water mark, though, at least to this point in his career.  His entry level contract expired at the end of that rookie season, and he became involved in a dispute with the club over the extension.  He went to arbitration and won a $1,000,000 judgment.  The club walked away from it, placing him on waivers, then buying out his contract when he cleared waivers.  Since then, Kennedy has played in only 46 NHL games over three seasons with two clubs (Florida and San Jose).

Meanwhile, there is that sixth round pick for whom Kennedy was traded.  And that brings us to the third member of The Late Show to reach the 100-games played mark in the NHL among Caps draft picks.  Mathieu Perreault was selected in the sixth round (177th overall) in the 2006 Entry Level draft.  Perreault served his apprenticeship with two seasons at Acadie-Bathurst Titan (the team with shich he was playing in the QMJHL when he was drafted by the Caps), then a season with the Hershey Bears in the AHL before splitting time with the Caps and Bears in the 2009-2010 season (77 games in Hershey, including 21 in the Calder Cup playoffs, 21 with the Caps).  He split time between the Bears (40 games, including six in the Calder Cup playoffs) and the Caps (35 games) in the 2010-2011 season.  He made the jump for good in the 2011-2012 season, playing 64 games with Washington and another four in the Stanley Cup playoffs.  To date, he has 159 NHL games on his resume, plus another 11 post-season games with 33 career regular season goals and 70 points.  By way of comparison, Kennedy has only 31 points in 125 regular season games.

But how have the Caps done compared to their peers in the NHL?  Here is the list of clubs, ranked by the total number of picks made in the sixth through ninth rounds in the 2001-2010 period: 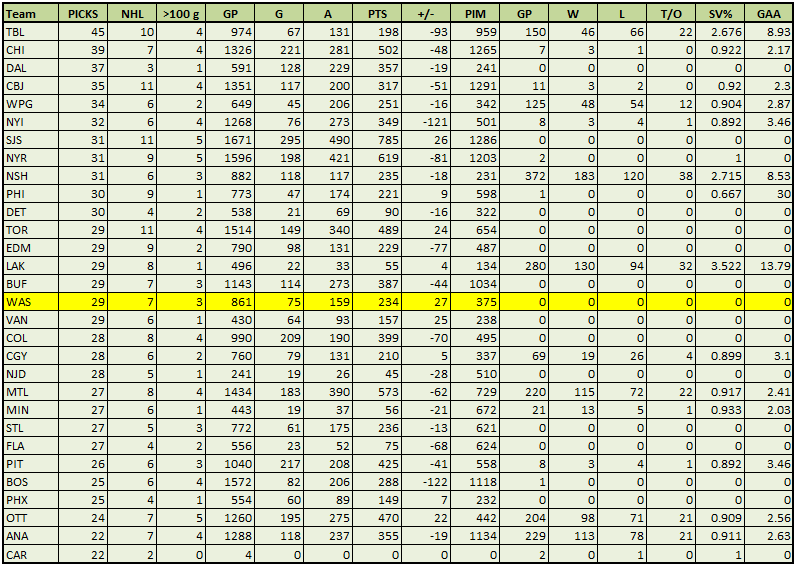 The Caps rank in the middle of the pack in total selections over this period (tied for 12th), do about the same in terms of their picks getting to the NHL (tied for 11th), and are in the same ball park in getting players who reach the 100-games played mark (tied for 13th).  Ditto for total games played (16th), goals (18th), and total points (18th).  This is a curious part of the draft, though.  One would expect these to be the longest shots of the draft, by definition. But they are not substantially longer (9.4 percent of players drafted have played in at least 100 games) than the odds in the fourth and fifth rounds (10.3 percent). 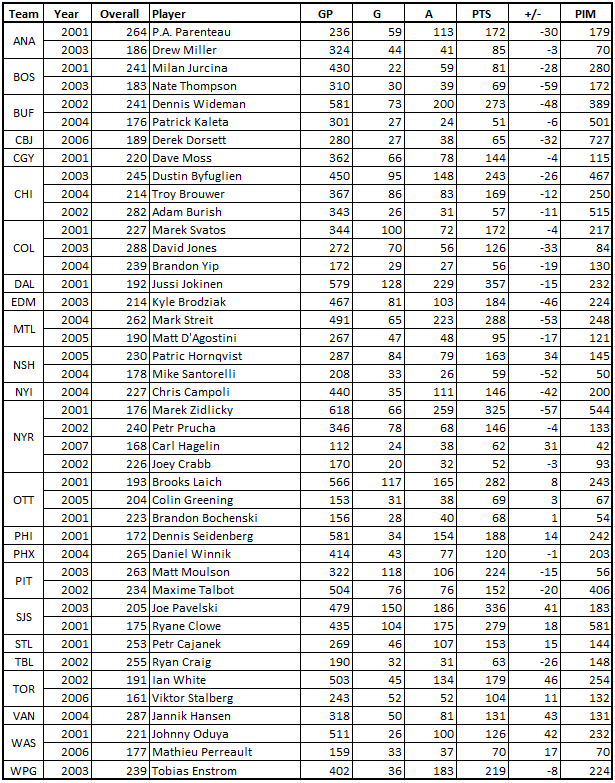 And even if there are players who just miss that threshold, what is also worth noting is the number of players who have cobbled together a lasting career out of this tranche of draft picks.  No fewer than 20 skaters have logged more than 400 games in the NHL out of the sixth through ninth rounds.  Included among them are such players as:

As the draft years indicate, it takes some time in the developmental phase to get a foothold to be able to reach that threshold.  Then there are the goalies.  There is a respectable group here who have compiled at least 100 games on their respective resumes:

In the end, it is certainly possible that as refinements and improvements in scouting are found and implemented, finding such players in the late rounds will become increasingly rare.  The sorting out of the population of draft picks would mean than such players as might have been found in the sixth or seventh rounds would be taken in higher rounds.  But in this group, there not only have been reliable players but the occasional upper-end contributor or even star (had we included 2000 in this review, we could have captured goalie Henrik Lundqvist, a seventh round pick in that year).

The Caps have not struggled as much, relative to their peers, as they did in the second through fifth rounds.  They have drafted decently here, even if Mathieu Perreault is the only product of this tranche of draft picks making any meaningful contributions to the organization to date among those picks.  Perhaps there is a player drafted here of more recent vintage who can make the leap from The Late Show to prime time.

Posted by The Peerless at 5:59 AM No comments: