An old man passed me on the street today;
I thought I knew him but I couldn't say.
I stopped to think if I could place his frame.
When he tipped his hat I knew his name.

It only seems like forever since Brooks Laich played a full season in the NHL, and he is hardly an old man, but he is 15th on the all-time list of games played in Washington Capitals franchise history (616), second among active players on the club to Alex Ovechkin (679).  He would be the active leader in games played had he not missed 70 of 130 games over the past two seasons.

And that is the issue for this season.  Despite repeated comments over time that were variations on a “feeling good” theme, there is the fact that Laich has not played a full season of NHL hockey since 2011-2012.

Last season Laich managed 51 games of action, but it was a matter of skating on one and a half legs.  That was the product of lingering groin problems that seemed to stem from an injury he sustained while playing in Switzerland during the 2012 NHL lockout.  That he led the team in shorthanded ice time per game, situations that might put even greater stress on a wonky groin, and added another 1:20 per game on the power play speaks to his grit and determination, or his stubbornness over the extent of his injury, depending on your point of view.

His performance level since his injury is down form that of his first seven full seasons with the Caps.  Over those first seven seasons, Laich’s scoring line per 82 games was 17-24-41.  In 60 games over two seasons since he was injured it is 14-16-31, perhaps not as bad as one might have expected.  When one accounts for the fact that it was his power play production that was down substantially, from 6-6-12 per 82 games in his first seven full seasons to 2-5-7 per 82 games over the last two seasons, it further suggests a level of grit (or stubbornness) that permitted him to function at something approaching a career level, at least offensively, at even strength.

In 2011-2012, the last healthy season Brooks Laich had, he was one of 12 forwards in the NHL playing in at least 50 games who had at least 13 minutes of even strength ice time a game, and at least two minutes of both power play and shorthanded ice time a game.  That speaks to the versatility Laich possesses and that can be valuable to this team in 2014-2015.

Given the presence of Troy Brouwer and Joel Ward (both right-handed shots) in the middle of the power play, it seems unlikely that the left-handed shooting Laich would get that kind of man advantage ice time, but this is a team that needs all the help it can get killing penalties.  Among forwards playing in at least 50 games in 2011-2012 Laich ranked 20th in 4-on-5 ice time per 60 minutes.

It might be at even strength, though, where Laich’s presence might be felt most.  Looking back again at that last healthy season, Laich had the second lowest share of offensive zone starts among 11 Caps forwards playing in at least 50 games (43.1 percent).  However, he has a higher share of offensive zone finishes, so he as least moved the tilt a little less in the defensive zone direction, and his team rank in goals-against/on ice per 60 minutes outperformed his offensive zone start shares, implying a certain effectiveness in dealing with tough geography on the ice.

That all sounds real nice, Fearless, but he’s 31 years old, has more than 650 games of regular season and playoff experience, and has tried to skate through an injury that still took 70 of 130 games the last two seasons off his resume.  Is it reasonable to think, even if he is anything close to healthy, for him to return to that 2011-2012 version?   Maybe by winter or spring, but in October?

Fearless kept comparing Laich to his last healthy season in 2011-2012.  Fine, but that year was two years removed from the last of his career best three years, from 2007-2008 through 2009-2010, when he scored 69 goals and only missed four games.  Four seasons have passed since then.  Any chance he returns to that level of production?

The Big Question… Where will Brooks Laich play?

It is not an urgent question in October, but it might be nice if Brooks Laich had a position to call his own at some point this season.  For one thing, it would signal his being healthy in fact and not just in press releases.  For another it would signal stability across the rest of the forward lines.  The one place where Laich might be the first option is at third line center.  With him in this position, it is an indicator that the Evgeny Kuznetsov experiment at second line center is working.  One might envision such a lineup as having Alex Ovechkin on the left side, Nicklas Backstrom in the middle, and perhaps Eric Fehr on the right side of the top line.  Kuznetsov might be centering Marcus Johansson on the left and Troy Brouwer on the right on the second line.  Laich would be centering Jason Chimera on his left and Joel Ward on his right on the third line.  If Laich is moving around the forward lines, it could be a sign that other things are not working as well as hoped.

Although Brooks Laich might feel like he’s five-years old again, he is one of the core players on whom the Caps will be depending for a solid year to get them back into the post-season.  On a team that struggled in 5-on-5 play and penalty killing, Laich will be expected to provide the means to improve in those areas.  It is not the youthful effervescence on which the Capitals will be relying, but the experience earned as the longest tenured Capital in continuous service.  His window, like that of the Caps, is still open a bit.

Posted by The Peerless at 11:36 PM No comments: 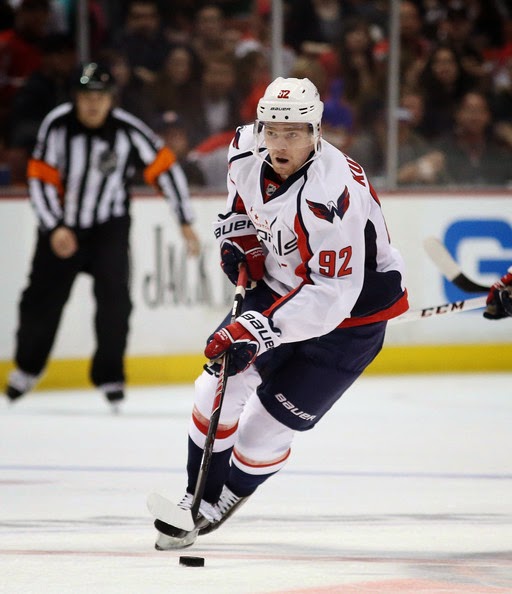 “Experience is something you don't get until just after you need it.”
-- Steven Wright

Foodies will probably recognize the term “amuse-bouche.”  A French term that can be translated, “to entertain the mouth,” they are generally bite-sized representations of the chef’s craft and skill, an indicator of what is to come in your meal.  We have no idea what how the term translates into Russian, but late last season Evgeny Kuznetsov provided a bite-sized version of what might be in store for 2014-2015.

In 17 games Kuznetsov went 3-6-9 (a 43 point pace, albeit in a small population of games) and had a couple of highlight reel moments.  Like his first NHL goal…

Or his first turn in the Gimmick…

Or his fake slap shot/pass to Tom Wilson…

But before we help young Mr. Kuznetsov clear some space on the mantel for a Calder Trophy as 2014-2015 rookie of the year, let’s all take a step back, take a deep breath, and remember that while he was 2-5-7 in his first nine games, he had only two points in his last eight games.

Then there is the matter of where he will play.  Kuznetsov spent those 17 games at the end of last season at left wing.  He is likely to start training camp auditioning for a new role: second line center, the persistent hole in the Capitals’ lineup.  If he takes to the position, he could be the answer for the next decade.  However, if he does not, it could mean a revolving door at that position once more.

In the 39-season history of the Washington Capitals, only 17 first year players playing in at least 15 games had more points-per-game than Evgeny Kuznetsov had last season (0.53).  Last year’s 43-point pace, even if it was in a small population of games, was one that would have had him fourth overall in rookie scoring over a full season.  Kuznetsov, who is still a rookie for purposes of the upcoming season, has some built in advantages in terms of hitting the ground running in October.  He spent four seasons with Traktor Chelyabinsk in the KHL, honing his game against professionals in preparation for his move to the NHL.  He also has significant international tournament experience – two world under-18 tournaments, three world junior tournaments, and three world championship tournaments. He is a rookie for NHL purposes, but perhaps not a "rookie" in terms of his experience, even if he is only 22 years old.

Yeah, about that whole second line center thing.  It’s one thing to be a center moving to the wing, even it is a temporary thing – Nicklas Backstrom started his career with the Caps on the wing, Nathan MacKinnon spent a lot of time at right wing last season in Colorado.  Both are natural centers (yeah, and both were younger than Kuznetsov, too).  It is another thing for a player who has not played the position on a scoring line in the NHL to be put into that position as a rookie, even one with his international experience at the position.  It might be that the best to be said here is that the team was patient enough with him in the position to allow him to grow into it and be a lot better at it in March than he might be in October.

The Big Question… What would a reasonable rookie season look like for Kuznetsov?

Those nine points in 17 games and the occasional highlight reel play might have some Caps fans entertaining thought of a big rookie season for Kuznetsov.  Maybe 60 points, maybe even 70.  OK, let’s take a minute here.  Alex Ovechkin recorded 106 points as a rookie.  That’s the franchise record, and the sun will go dark before it’s broken.  Next on the list is Nicklas Backstrom, who had 69 points in 2007-2008.  Chris Valentine in 1981-1982 and Bengt Gustaffson in 1979-1980 are the next centers on the list with 67 and 60 points, respectively, in their rookie seasons, but that was a different era.

Given who his linemates might be, Troy Brouwer on the right side and any of Marcus Johansson, Brooks Laich, or possibly even Eric Fehr or Jason Chimera on the other side, anything north of, say, 55 points would look like a pipe dream.  But he has the skill and the experience (more so than most “rookies”) to perhaps challenge that 55-point level.

We have seen Evgeny Kuznetsov entertain with a fair number of highlight plays in his young career to date.  Over an 82-game season the object, given his role as a scoring line center, is going to be one of providing consistent production more than bursts of flair and helping make those around him better.  Then there is the matter of his defensive responsibilities.  He will not have the same lock-down role that a checking line center might have, but he can’t be caught cheating so much into the offensive end that his line becomes a defensive liability, either.

It is going to be a lot for Kuznetsov to assimilate in this role, even if he does have more than 200 regular season and playoff games of KHL experience and 37 games of world championship and world junior championship tournament experience.  Now he gets to add to his NHL experience, and just in time, because how quickly he fills his new role will be one of the plot twists to pay attention to as the Caps look to return to the post-season.

Posted by The Peerless at 12:27 PM No comments: