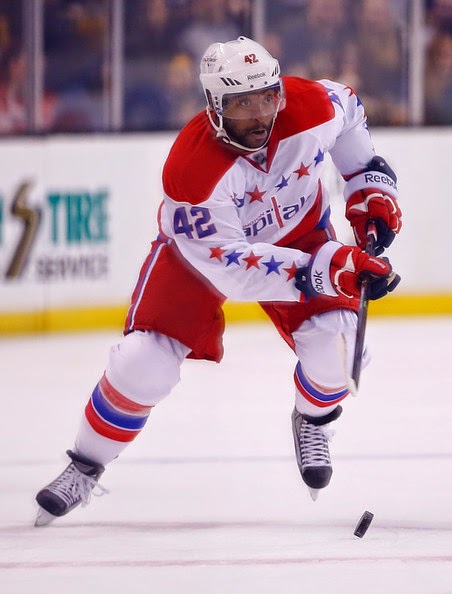 “The reward of a thing well done is having done it.”
-- Ralph Waldo Emerson

It was an especially sweet season for Ward who, in the eyes of some, might have been seen to struggle in his first two seasons in Washington after signing a four-year, $12 million contract as an unrestricted free agent in July 2011.  His 24 goals almost doubled his output with the Caps over his first two seasons (14) and equaled his output over his previous three seasons, including his last year with the Nashville Predators.  His 25 assists surpassed his combined output over his previous two years with the Caps (24), as did his 49 points (38).

Ward recorded the first hat trick of his career last season, potting three goals in a 7-0 rout of the Philadelphia Flyers on November 1st.  He had two other three-point games, two goals and an assist in a 6-5 overtime win over the Detroit Red Wings on February 2nd, and a goal and two assists in a 5-2 win over the Carolina Hurricanes on April 10th.

As one might expect, Ward was most effective in winning efforts, going 16-14-30 in the Caps’ 38 wins.  However, his 9-10-19 scoring line in the Caps’ 44 regulation and extra time losses was respectable, given that he did not play on a scoring line.  The most telling difference between his performance in wins and losses was that he scored five of his six power play goals in wins.

Ward is going to be 34 years old in December, and he plays a pretty rugged style of hockey.  He has been durable, playing in almost 93 percent of the games scheduled over his six full seasons in the league. Still, he’s getting to that point where the combination of durability and performance will be something to watch.  There are a fair number of forwards since the 2004-2005 lockout who have played in at least 75 games and scored at least 15 goals after reaching the age of 34 (54 in fact), but not many do it more than once (28 forwards).  Of course, he is in the last year of his contract, too, so he only has to do it once.

The Big Question… Can Joel Ward match, or at least come close to his career numbers of last season?

The easy thinking here is that Ward will be playing for a coach with whom he has experience, and he will be working in a system that either he has grown comfortable with or that has learned to accommodate his skills (at least on the power play).  One might expect that he will play a role similar to the one he played last season, right wing on the third line at even strength and in the middle of the power play when Troy Brouwer is not manning that post.

That Ward could match or approach those career bests he set last season is certainly possible.  It just might not be the way to bet.  Why?  His even strength goal total (16) was 33 percent higher than his previous best (12 in 2008-2009).  His even strength assist total (21) almost matched that of the previous two seasons combined (22).  He finished seventh in shooting percentage (18.0 percent) among 287 qualifying forwards, another career best that is substantially higher than his career mark before last season (9.5 percent).  That is quite a spike in performance.  Sustainable?  We will see.

Then there is the consistency issue.  Was last year’s production pace after his first 20 games a one-off, or is it a sign of later career dependability in his output?

Joel Ward is in a contract year that could make him an attractive signing for the second time in his career.  In 2010-2011 he had a good, if unspectacular regular season (10-19-29, minus-1 in 80 games).  It was his playoff performance that year that stood out (7-6-13 in 12 games).  It earned him a shot at a lucrative contract in unrestricted free agency that he received from the Capitals.  He might need something closer to the regular season performance he had last season, one in which he skated on what was often the best forward line the Caps had, or a big post-season such as the one he had in his last season in Nashville to catch the eye of other teams or get consideration from the Capitals to tender an offer.

The pieces are in place for Ward to do just that, but there are issues, too, or at least things to look for as the season unfolds for him.  Having done a thing well last season, if he does it as well or nearly as well this season he will be rewarded.


Can we pick one and settle on that?  Really...just what color is it?