“The whole secret of a successful life is to find out what is one’s destiny to do, and then do it.”
-- Henry Ford

In the 42 seasons that NHL hockey has been played in Washington, only 39 skaters have played in more games for the Capitals than Jay Beagle (392).  This might seem a bit odd for a player who was not drafted, was only signed by the Caps as a free agent at the age of 22, who didn’t play his first NHL game until the age of 23, and didn’t play more than half the games of a Caps regular season until he was 27 years old.  His career is a statement of hard work, attention to detail, and perseverance.  In the 2016-2017 season, those traits combined for what was a career season for Beagle.  He finished the season with career bests in games played (81), goals (13), game-winning goals (4), assists (17), points (30), plus-minus (plus-20), and shots (100).

It was a season that was put together with an uncommon consistency.  Beagle scored goals in each of his eight ten-game splits and recorded between three and five points over those eight ten-game splits.  Only once did he have a “minus” record in any ten-game split (his seventh, over which he was a minus-1).  And, for a fourth liner, those points he recorded came on a regular basis.  His longest streak without a point was six games; in his last 50 games his longest such streak was four games.

Beagle added to a superb body of work in the game’s most basic play, the faceoff.  Of 150 players taking at least 250 draws this season, Beagle won 56.4 percent of his draws to finish ninth in that group.  Among 180 active skaters taking at least 1,000 draws over their careers, Beagle is fifth with a career mark of 55.9 percent.  Does it matter?  The Caps were 19-2-0 when Beagle won at least ten draws in a game this season.  Then again, they were 5-1-1 in games in which he lost ten or more draws.  Perhaps it was a simple matter of volume.  In 36 games in which Beagle took 15 or more draws, the Caps were 32-2-2.

Time seemed to matter, if only coincidentally, with respect to Beagle and the Caps’ success.  In the 32 games in which Beagle skated more than 14 minutes, the Caps were 29-2-1.  This might be a product of being able to roll four lines in games in which the Caps were competitive, but it is indicative that Beagle had enough value to give him those minutes in those games. 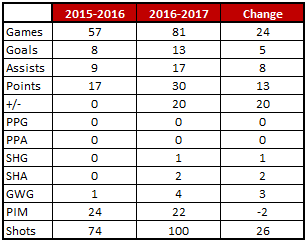 Cheerless’ Take…  Of 14 forwards to skate at least 100 5-on-5 minutes for the Caps this season, Beagle had the worst individual Corsi-for (47.02 percent; numbers from Corsica.hockey).  This is not a one-off instance, either.  In seven seasons in which he appeared in more than 30 games for the Caps, he has never reached the 50 percent mark in 5-on-5 Corsi-for.  Beagle skated at least 50 5-on-5 minutes with five Capital forwards, and each of those forwards had better Corsi-for numbers apart from Beagle than playing with him (numbers from stats.hockeyanalysis.com).  In fact, all of them had Corsi-for values under 50 percent with Beagle and had Corsi values over 50 percent apart from him.

When the Capitals hosted the Chicago Blackhawks on January 13th, they were looking to sweep the two-game season series.  Washington defeated the Blackhawks in Chicago, 3-2, in overtime on November 11th, a game in which Beagle recorded both Capitals goals in regulation, one of them a shorthanded tally, the first such goal of his career.  In this contest, the Caps were riding a seven-game winning streak, their longest of the season to that point.  The Caps made short work of the competitive portion of the game, the scoring opened on a goal by Beagle 6:04 into the game, followed 13 seconds later by a Nicklas Backstrom goal and a score by Brett Connolly late in period to give the Caps a 3-0 lead at the first intermission.  Beagle scored his second goal of the game with 1:32 left in the contest to cap a 6-0 win.  He finished the season series against Chicago with four of the Caps’ nine goals scored, including the game-winner in the January 13th contest.

Opening Night is always something special, a game players point to when preparing for the new season.  When it is against the defending Stanley Cup champions, it is just a bit bigger.   For Jay Beagle, it was a forgettable game for no other reason than one might have forgotten he was in the lineup.  He skated just 14 shifts and recorded only 7:37 in ice time, a season low, only 6:08 of that at even strength in a game that went 65 minutes of regulation and overtime before the Penguins won, 3-2, in the Gimmick.   It was not that he played poorly or committed any noteworthy errors (although he was on ice for a Penguin power play goal).  He had two shots on goal and two blocked shots, and he won five of eight faceoffs.  But it was a night he spent watching much more than playing.

Jay Beagle has never been a big scorer in the postseason, but not since he played in four games of the 2008-2009 playoffs did he go an entire postseason without a point.  Such was his fate in the 2017 postseason.  It was part of a broader problem repeated from the 2016 playoffs, a lack of bottom-six contributions on offense.   It was, in part, a case of his shooting drying up.  He recorded only six shots on goal in more than 150 minutes of ice time.  And speaking of ice time, Beagle was something of the canary in the coal mine.  The Caps were 7-2 in games in which he skated at least ten minutes, both losses coming in overtime.  They were 0-4 in those games in which he skated less than ten minutes, and all of those games (and losses) were against Pittsburgh.

Not that our prognostos are the first, only, or final word on how players will fare in a season, but Jay Beagle wildly out-performed our prognosto for the regular season, roughly doubling his goals, assists, and point projections.  His year-over-year improvements from the 2015-2016 season were substantial.  He centered what might have been the best fourth line in the NHL this season.  That is a phrase that seems a bit odd, perhaps giving added weight to the influence of a fourth line on game outcomes.  But contributions from that fourth line were significant (Beagle, Brett Connolly, and Tom Wilson contributed 33 of the team’s 176 even strength goals this season), more so than they were in 2015-2016.

The playoffs were another matter.  Getting contributions from the bottom six was lacking in the 2016 postseason, and it seemed to be addressed with off-season moves and the emergence of Beagle as a more prolific offensive contributor in the regular season.  But the fourth line contributed one point in the postseason (Tom Wilson’s overtime goal in Game 1 of the first round series against the Toronto Maple Leafs; his other two goals were scored with the third line).  And Beagle had the worst plus-minus of any forward on the club for the postseason at minus-5.   Like a lot of Capitals, Jay Beagle undid a lot of good he accomplished in the regular season with a postseason that was as productive – and as disappointing – as that in 2016.