Over the course of a winning streak there will be some games won with flash, and there will be others you will grind out.  The Washington Capitals won their sixth consecutive game last night in the latter fashion, grinding out a 3-1 win over the Carolina Hurricanes.

Carolina opened the scoring on a power play when Jeff Skinner avoided an attempted stick check by John Carlson to swat home a rebound of an Eric Staal shot at the 5:01 mark of the first period.  That is how things remained until mid-way into the second period when the Caps returned the favor on their own power play.

It started with Mike Green holding the puck in the offensive zone at the right point.  Green fed Nicklas Backstrom along the right wing wall.  Backstrom edged up the wall and fed Troy Brouwer in the middle of the 1-3-1.  Brouwer slid the puck down to Mike Ribeiro at the goal line, where Ribeiro had options.  His first option was Alex Ovechkin, but Tim Gleason had his stick down and in the passing lane, and Eric Staal was cheating to that side of the ice.  With only Justin Faulk defending the other options on that side of the ice and swiveling around, undecided as to how to defend those options, Ribeiro returned the puck to Brouwer, who one-timed it past goalie Justin Peters to tie the game.

Less than three minutes later, Mike Green gave the Caps the lead on a play that was a total breakdown by Carolina. Jay Beagle fed a pass from the Olympia Corner to Green at the far right point.  Green used Jeff Skinner as a skating pylon, circling around the Carolina forward toward the Hurricanes’ net.  Once past Skinner, who could only wave his stick at Green as he was sailing by, Green had an almost scot-free path to the net.  Before Jordan Staal could close the distance, Green snapped the puck from the right wing faceoff dot to the long side, over Peters’ blocker, and into the back of the net. 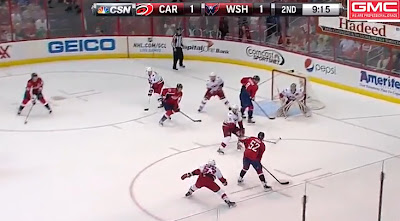 After that, the game was in the hands of goalie Braden Holtby, returning to the Capitals’ net after a two-game respite.  Holtby was up to the task, stopping all 16 shots he faced in the third period, giving Troy Brouwer an opportunity to put the finishing touches on the win with an empty-net goal with six seconds left for the final 3-1 margin.

-- Good thing Holtby got some rest.  The 43 saves he recorded was not just a season high (surpassing the 38 he made in a 2-1 loss to the New York Rangers on February 17th), it was a career regular season high for him, topping the 40 saves he made against these same Carolina Hurricanes in a 2-1 Capitals win on March 11, 2011.  The only career game in which Holtby made more saves was on May 2, 2012, when he made 47 saves in a 2-1 triple-overtime loss to the Rangers in Game 3 of the Eastern Conference semi-finals.

-- Alex Ovechkin managed six shots on goal (15 total attempts), but none of them went in, breaking his goal-scoring streak at three games.  Also without an assist, his points streak ended at three games as well.  But in that photo above, note that he is right there, looking to redirect whatever is coming off Green's stick.  It's the "new" Alex.

-- On the other hand, Nicklas Backstrom streaks on.  He recorded an assist on the first Troy Brouwer goal, making it points in eight straight games.

-- Brouwer’s two-goal night was his first since getting a pair against the Florida Panthers in a 5-0 Capitals win back on February 9th.

--  Wolski Sighting!!  Wojtek Wolski recorded an assist on Mike Green’s goal, breaking a five game streak without a point.  It was the only mark on his score sheet in 7:09 of ice time, a team low in this game.

-- Marcus Johansson and Jeff Skinner going off for coincidental roughing calls is a bit like the midget wrestling undercard in the old days waiting for the big guys to come out.

-- The Caps were lucky in one important respect.  In just 1:59 of power play time Carolina managed to record eight shots on goal.  Well, maybe not “lucky” so much as “Holtby,” even though one did get through.

-- When Matt Hendricks dropped the mitts with Nicolas Blanchard in the second period, it was the first time he engaged in the pugilistic arts since he was challenged twice in a 4-1 loss to Boston on March 16th.  Fans of such things will be quick to remind that the Caps scored what would be the game-winning goal barely two minutes later.

-- The assist by Mike Ribeiro makes four points in his last four games, an indication he is coming out of his slump that saw him record only one point in six games up to and a game past the trading deadline.  Perhaps more important, it was the way he got that assist, using a slick stickhandling move to work the puck around Justin Faulk from the goal line extended to feed Troy Brouwer for one-timer from the slot.  The Caps will need more of that going forward.

In the end, the Caps are marking time again, but in a good way.  The win kept Winnipeg from closing the two-point distance by which they trail the Caps.  And with the games dwindling to a precious few with which to make up that distance (including one with the Caps), the Jets are the team needed help.  Meanwhile, the Caps need only to do what they have been doing…taking care of their own business.