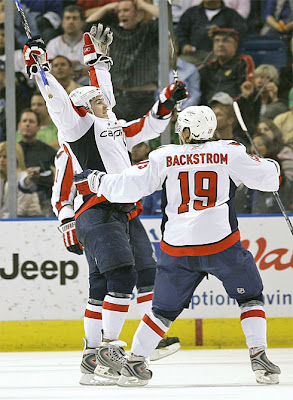 We’re getting down to the nub of it, starting with number 4 on the top stories of 2009…

January 20, 2009 was Inauguration Day in the United States, a celebration of a new President taking the oath of office, a day of great hope and expectations. North of the border, it marked the last game day for the Washington Capitals heading into the All-Star Game break. The Caps visited the Ottawa Senators with the hope and expectation that they would add to a modest three-game winning streak and carry the good feelings from such an accomplishment into the break.

The Caps failed to properly execute the script, falling to the Senators on a late power play goal, 3-2. Lost in the box score was the fact that defenseman Mike Green led all players on both teams that night in shots on goal (seven). He had nothing to show for it, though, and he and the Caps trudged off to spend a few days without the happy feeling of a four-game winning streak to comfort them.

The thing is, that would be the last time Mike Green would skate off the ice after an NHL game having not scored a goal for the next 26 days. In between, he would take the ice eight times, and in all eight games he registered at least one goal, setting a record for defensemen scoring goals in consecutive games. How did the streak play out?...

Game 1, at Boston, January 27th. Green hardly started his streak quietly, getting the first goal of the game a mere 2:08 into the contest, an even-strength marker on a feed from Alex Ovechkin. It would be one of eight shots on goal Green recorded for the game, but the Caps lost the contest on an overtime goal by David Krejci, 3-2. Of the three Bruin goals, Green was not on the ice for any.

Game 2, vs. Detroit, January 31st. After the teams split two goals in the first period, both coming in the last two minutes of the frame, the Caps and Wings fought through a scoreless second period until the 17:19 mark. Nicklas Backstrom worked his way up the left wing wall before trying to break out toward the middle of the ice. As he was being hauled down by Valtteri Filppula, Backstrom pushed the puck out to Green high between the circles. Green let fly and beat Ty Conklin for the Caps’ second goal. The Caps would go on to win that contest, 4-2, and again Green was not on the ice for either Red Wing goal.

Game 3, vs. Ottawa, February 1st. The Caps got a rematch against the Senators in the back-half of a back-to-back, and it turned out to be a wild one. Daniel Alfredsson got things started early with a goal at 3:31 of the first period. But it was Green who got it back, tying the game six minutes later whenon a power play, Nicklas Backstrom won a faceoff cleanly in the Senator end. Green collected the puck, walked a couple of steps to his left and banged home a slap shot to tie the game. The Caps would add another in the first period, then outscore the Senators 4-1 in the second period on their way to a 7-4 win. Of the four goals scored by Ottawa, Green was on the ice for one, a 4-on-4 tally by Alfredsson for the only Ottawa goal of the second period.

Game 4, at New Jersey, February 3rd. Green had his second “first goal” of the streak at the 5:58 mark when Alexander Semin threaded a pass from the left wing wall through traffic and onto Green’s stick on the back side of the play. Green wristed the puck over Scott Clemmensen’s glove to give the Caps the early lead on their way to a 5-2 win over the Devils. Green finished with two points in the contest, but took a minus-1 when Jamie Langenbrunner scored a shorthanded goal early in the third period.

Game 5, vs. Los Angeles, February 5th. It was a night to remember, and it wasn’t. The story for the Caps was Alex Ovechkin scoring his 200th NHL goal and first against the Los Angeles Kings. On the other hand, Mike Green did get a power play goal of his own 41 seconds after the Kings scored a shorthanded goal on the same Capitals power play. It wasn’t a particularly pleasant night, for despite the goal (and an assist), Green was on the ice for the last three goals the Kings scored in a 5-4 win over the Caps.

Game 6, vs. Florida, February 7th. Green and the Caps bounced back in the following game, both in terms of discipline and the result. It was also the first two-goal game in the streak for Green. He got the first on a power play 43 seconds into the third period of a 1-1 game. Alex Ovechkin faked a slap shot from the top of the left wing circle, choosing instead to move the puck over to Green at the right point. Green took a couple of steps toward the center of the ice, and with bodies realigning position in front of goalie Tomas Vokoun, Green sent a well-placed wrister through a screen and into the back of the net to give the Caps the lead.

Green would put the period on the end of the sentence late. With the Panthers on a power play with less than two minutes remaining and the goalie pulled for an extra attacker, Nathan Horton fired a shot off a rebound that goalie Jose Theodore got a piece of and directed toward the Zamboni Corner. Green chased it down and in one motion flung the biscuit the length of the ice and into the empty Panther cage to seal the 3-1 win. Green had a hand in all three Caps goals, adding an assist to an Eric Fehr goal. His mark of goals-on-ice against was clean in this one. He also was now knocking on the door of a 25-year old NHL record – seven consecutive games with a goal scored by a defenseman.

Game 7, at New York Rangers, February 11th. Green had one of his best games of the streak in what would ultimately be a losing effort. Lauri Korpikoski lifted the Rangers into a 2-2 tie mid-way through the second period, but less than two minutes later, Green struck back to give the Caps the lead once more. A loose puck along the left wing wall found its way onto the stick of Alex Ovechkin, who wasted no time in sending the puck across to Green easing in from the right point. Green wasted just as little time wristing the puck past Henrik Lundqvist’s glove, and Green tied Mike O’Connell’s record, set for the Boston Bruins in the 1983-1984 season.

Green was hardly done, though. With the Caps trailing 4-3 as the game headed into the final minute of regulation, Michael Nylander controlled the puck inside the Ranger line. As the Rangers settled back into a defensive posture, Nylander circled with the puck at the top of the zone. He then dropped the puck for Green who sent what Caps play-by-play broadcaster Joe Beninati described as “a bomb” past Lundqvist before the Ranger goalie could even flinch, knocking the water bottle from its perch atop the Ranger net. The Rangers won in the end, though, 5-4 in a Gimmick, but Green finished his record-tying night with two goals, a plus-3, four shots on goal, four hits, two blocked shots, and he was not on the ice for any of the Ranger goals.

Game 8, at Tampa Bay, Valentine’s Day. You could not script it any better. The Caps were on a Florida trip, and it was the annual chance for the Dads to travel with their boys. Mike Green’s father was in attendance for the possible record-setting night. The Caps took the suspense out of the game early, putting up three goals on the Lightning in the first 20 minutes. It made things a lot easier on Michal Neuvirth, who was making his first NHL start in goal for the Caps. All that left was the matter of whether Green could set the new standard for defensemen scoring goals in consecutive games. As the clock ticked past the five minute mark of the second period, fans got their answer…

The Caps poured off the bench to congratulate Green, who would say afterward that "I wasn't expecting that, but I was excited. It almost brought a little tear to my eye, so I was pretty jacked up." And as for his father being able to share that moment, Green said, “"To do it in front of Big Dave, that was great. I can't wait to give him a hug. I think he would have been here no matter what, whether it was the fathers' trip or not. But that one was for him."

In the eight-game streak, Green finished with ten goals on 29 shots, was 10-7-17 overall, a plus-10. Almost as noteworthy is that in the midst of the offensive nature of the streak, his defense did not suffer. To be sure, he had a struggle against the Kings, having been on the ice for three of the five goals scored by Los Angeles on that night. But in seven other games he was on the ice for two of the 17 goals scored against the Caps (five of 22 overall). The Caps also happened to finish 5-1-2 over the eight games. It was not just a record-setting performance by an “offensive” defenseman, it was a superior two-way effort over a two week period that would compare favorably with any such performance from any defenseman last season.

But it is the streak that makes this story so noteworthy, an NHL record setting streak. And that certainly qualifies as a top-ten story for the Caps in 2009.
Posted by The Peerless at 5:42 PM 1 comment: