The Peerless Prognosticator is ON THE AIR!!! -- Game 46: Sharks at Capitals, January 14th

The Washington Capitals take a step up in weight class in their schedule this week, starting with Tuesday’s tilt against the San Jose Sharks.

The Capitals’ history against the Sharks is, to be kind, unpleasant.  Once upon a time, when the Sharks were merely pups, the Capitals owned the series.  Washington won the first five meetings in this series, but then things took a turn in 1993.  After scoring a total of 23 goals in the first five games between the clubs, the Caps managed just one goal in 18 shots against Sharks goalie Arturs Irbe in a 2-1 loss at USAir Arena in Landover, MD.

With that win, the momentum headed west.  Including that win, San Jose went 5-3-1 against the Caps over the next nine meetings.  Those ended what would be the “good old days" for the Caps in this series.  Since Washington beat the Sharks, 3-1, on February 20, 1999, the Caps are 1-15-1 against San Jose, a 4-1 win in October 2009 being the only win for the Caps in that span.

What is more, the games generally have not been close.  Nine of the 15 San Jose wins have been of the two-or-more goal variety, five of them by three or more goals.  Only four times in those 17 games have the Caps solved the Sharks for more than two goals, only twice in their last 12 games against San Jose.

The current edition of the Sharks is a bit hard to figure out.  Looking at their record (28-12-6) and their position in the standings (second in the Pacific Division), they look once more like a solid playoff club and a possible Stanley Cup contender, their profile over the last decade.   However, the Sharks have hit a few potholes recently.  Since defeating the Anaheim Ducks in the front half of a back-to-back set on December 29th, San Jose has alternated wins and losses (4-4-0).

Over those eight games the Sharks have a total of 22 goals, five of them from Joe Pavelski.  Not the biggest of centers (5’11”, 190), Pavelski finds a way to get things done.  With 21 goals so far this season he has already surpassed last year’s total (16), and his 37-goal pace would be a career best in eight seasons.  It is part of a longer hot streak for Pavelski, who has 12 goals in his last 16 games.  He has been a particular thorn in the side of the Capitals, going 5-4-9 in seven career games against Washington.

Only one active player has more career assists than does Joe Thornton.  If Jaromir Jagr, with his 1,030 assists at the moment, ever retires, Thornton will inherit the mantle of assist leader among active players, but the 832 assists he has in 1,171 games will have to do for second place for the time being.  In the 4-4-0 run over their last eight games, Thornton has eight assists, giving him a league-leading total of 45.  He is 12-24-36 in 35 career games against Washington.

If there is a surprise among the San Jose scorers of late, it might be defenseman Jason Demers.  Not generally known as an offensive defenseman (his career best is 21 points in 75 games in the 2010-2011 season), he is 1-5-6 in his last eight games and 3-6-9 in his last 11 contests.

Here is how the teams break down so far this season: 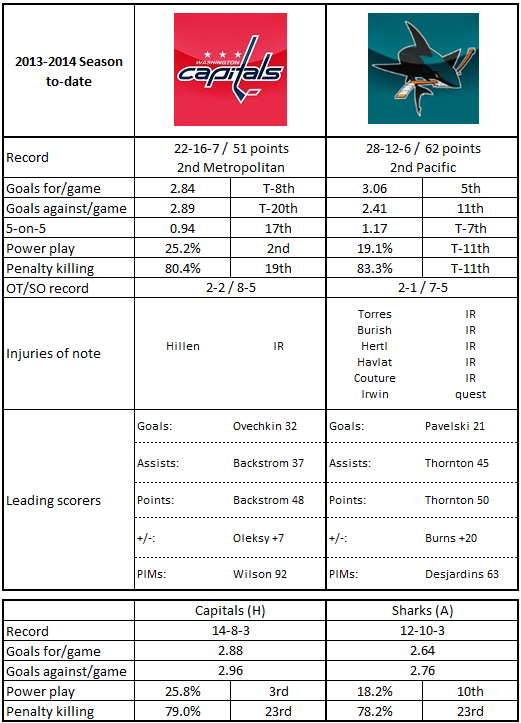 1.  San Jose does a lot of things fairly well, but they do not stand out from the pack in any individual area.  They are top ten in scoring offense, just outside the top ten in scoring defense.  They are top-ten in 5-on-5 goals scored/goals allowed ratio.  They are 11th in power play, 11th in penalty killing.  They lead the league in shots on goal per game, yet are also top-ten in fewest shots on goal allowed.  This is a team that can, at least in theory, find a lot of different ways to win when one part of their game or another is not working.

2.  What San Jose seems not to do especially well is win one-goal games.  They are tied for 14th in winning percentage in one-goal contests, losing as many games as they win (11-5-6).

3.  The Sharks are a very disciplined team.  They have the fourth fewest penalty minutes per game and the fewest minor penalties taken, and by a rather healthy margin (134 to 146 for Colorado).  No team has found itself shorthanded less often than the Sharks (2.6 times per game).

4.  San Jose puts teams away early.  They have outscored opponents by a 51-22 margin in the first period of games.  They have earned points in 21 of 22 games in which they took a lead into the first intermission (17-1-4).

5.  As one might expect with a club that does a lot of things well, the Sharks are an accomplished possession team.  In 5-on-5 close score situations San Jose is third in the league in Fenwick-for percentage,fourth in Corsi-for percentage.  If there is a crack, though, here is where it is.  The Sharks wobbled in their possession over their last four games, going over 50 percent in Fenwick-for and Corsi-for shares twice and falling short of 50 percent in both twice.  They also have shot in bad luck in those situations, twice with a shooting percentage of 0.0 in those four games (on 31 total shots).  They lost both games, 3-2 to Nashville and 1-0 to Boston.

4.  The Caps have a curious statistic when allowing the first goal.  They do a better job than most of squeezing a point out of it.  No team has more overtime losses than the Caps when trailing first (six).  At least there is a point at the end of the day.

5.  The Caps are slowly, but surely climbing the possession charts.  They are up to 22nd in Corsi-for percentage (48.6) and 24th in Fenwick-for percentage, but within rounding error of 22nd place (47.9 percent) in 5-on-5 close situations.  A lot of that is due to the Mike Green-Dmitry Orlov pair, who lead the team in those values, well to the good side of 50 percent.

Antti Niemi does not often appear on short lists of the best goaltenders in the game.  Part of that might be playing on the west coast, where players sometimes suffer a lack of attention that their east coast counterparts get.  But there is also the matter that he has not had an extraordinary record stopping pucks.  His save percentage this season -- .913 – is consistent with his career mark (.916).  But he does one thing consistently.  He wins; tied for second in the league at the moment (although he has done so in the league’s most appearances).

It is one thing for the Caps to wait on whether Nicklas Backstrom and Alex Ovechkin record a point in a game.  When paired on the top line they did it often, and the Caps were reasonably successful (although secondary scoring was an issue).  Over the last three games the Caps experimented with breaking up Ovechkin and Backstrom, giving Backstrom the assignment of spinning straw into gold.  That is, making Troy Brouwer and Brooks Laich productive on the second forward line.  To date, things have not gone well.  The trio has one point in three games at even strength, that one coming against the Toronto Maple Leafs when Nicklas Backstrom pilfered a puck and scored unassisted.  If this experiment continues, this line has to produce…something.

1.  Shots.  This is going to be really simple.  If the Caps are getting eight or fewer shots per period in this game, it is the Sharks setting the tone.

3.  Balance.  This is going to be a continuing theme going forward.  The Caps are 20-9-5 when either or both of Nicklas Backstrom and Alex Ovechkin record a point (20-5-2 when Backstrom gets a point).  They are 2-7-2 when neither posts a mark on the score sheet.  The Caps need to be more than just these two.

You cannot like the Caps chances in this game.  San Jose has owned this team as no other has – not even the Pittsburgh Penguins – over the last, oh, 20 years.  There is also the little matter of the Sharks just being a better team on paper.  Ah, but the Sharks have struggled against the Metro so far this season (2-2-1), and the Sharks are 1-3-0 in the eastern time zone of the U.S. This will be the Sharks’ first trip into the eastern time zone since they dropped consecutive games in back-to-back fashion at Pittsburgh and at Carolina back on December 5-6 (yes, we’re reaching, it’s what we do sometimes).

But there is this, perhaps more concrete notion.  San Jose is neither an especially productive road team (12-10-3), nor are they especially effective killing penalties (78.2 percent on the road).  Both play into the Capitals’ strengths.  And, San Jose comes into this game in less than fine fettle.  Five players are on injured reserve, including three significant offensive cogs – Tomas Hertl, Martin Havlat, and Logan Couture.

This game has a familiar look to it.  If you look at it in a certain way, the Caps have the Sharks right where they want them.  Last season the Boston Bruins visited Verizon Center with a 14-3-2 record, sitting on top of the world.  The Caps were 8-11-1 and tied for last in the Southeast Division, 3-3-0 in their previous six games.  The Caps fell behind, 3-0, in the first period of that one, and then made it all up in what would be a 4-3 overtime win.  History repeats, and changes in the process…

Posted by The Peerless at 9:29 PM No comments: