The Peerless Prognosticator is ON THE AIR!!! -- Game 2: Winnipeg at Washington, January 22nd

The Washington Capitals open the home portion of their season this evening as they host the Winnipeg Jets.  The Jets will be coming to Washington fresh off spending Inauguration Day in … what the… Cheerless, what gives with the tuxedo?

“I was out last night celebrating.”

“Yeah, I was at the Official I-blog-rual Ball.”

“No, I-BLOG-ural Ball…it was a chance for bloggers of all stripes to get together to celebrate I-blog-uration Day.  I’m surprised you didn’t get an invitation.”

Must have been lost in the mail.  Meet any celebrity bloggers?

You mean Markos Moulitsas, who started “The Daily KOS?”

“No, the guy who started ‘The Daily Kuz’… he writes about when Evgeny Kuznetsov might come over to join the Caps.  Oh, and there was the ‘The Hullington Post.’”

Isn’t that the “The Huffington Post” and Arianna Huffington?

OK, I got nothing here.

“It was started by this guy who posts some of the best quotes from hockey legend Brett Hull.”

“Oh, and ‘Crooks and Liars’ tried to crash the party.”

Well, the celebrations are over, the private jets are whisking celebrities back from whence they came, the pols are getting back to doing whatever it is they do, and it’s time for us to get back to the long hard slog that is the NHL season.  Here in Game 2 the Caps will try to record their first win of the season at the expense of the Winnipeg Jets.  The Caps were 2-2-2 against the Jets last season, including a 1-0-2 record at home.  Five of the six games in the 2011-2012 season series were one-goal decisions, three of them requiring extra time to finish.

The Jets’ inaugural season in Winnipeg after spending 11 seasons as the Atlanta Thrashers was a rousing success off the ice.  The Jets sold out all of their 15,004 seats for each of their 41 home dates, and MTS Centre was widely hailed as one of the loudest arenas in which to play for visitors.

On the ice the Jets were a respectable 23-13-5 at home and had the eighth-highest scoring offense on home ice.  They had the second-best home power play conversion rate (22.0 percent).  Hockey was a hit in Winnipeg.

The road?  That was another story.  Only Tampa Bay and Carolina had fewer wins on the road than the Jets in the Eastern Conference.  Only the Lightning had fewer road standings points.  They tied Columbus for 28th in scoring defense, giving up 3.46 goals per game.  The power play that was so effective at home dried up on the road, finishing tied with Phoenix for 28th place at 12.7 percent.  The penalty kill was only marginally better away from MTS Centre, finishing 26th at 78.0 percent.

Individually the Jets reflected their team performance.  At home they had five players with at least ten goals, led by Andrew Ladd with 18 home markers.  Seven players had at least 20 points, led by Blake Wheeler with 40 in 41 games at MTS Centre.  No Jet playing in at least half the club’s 41 home dates was a “minus” player.   Only Antti Miettinen was as low as “even.”

On the road there was not as large a drop-off among individuals as one might expect, scoring-wise.  There were four players with at least ten goals, led by the 13 recorded by Evander Kane.  Five players had at least 20 points, led by Dustin Byfuglien with 26.  But those plus-minus numbers?  There were 16 players in minus territory for the season, including a minus-11 for Byfuglien in 31 road games.

Last year the Jets were two entirely different teams depending on the color of jersey they wore.  In the polar night blue and white playing at MTS Centre they were a formidable team.  In their road whites, definitely less so.  That would seem to be their biggest challenge this year, to translate some of that home formula into wins on the road.  Here is the numbers breakdown for the two clubs... 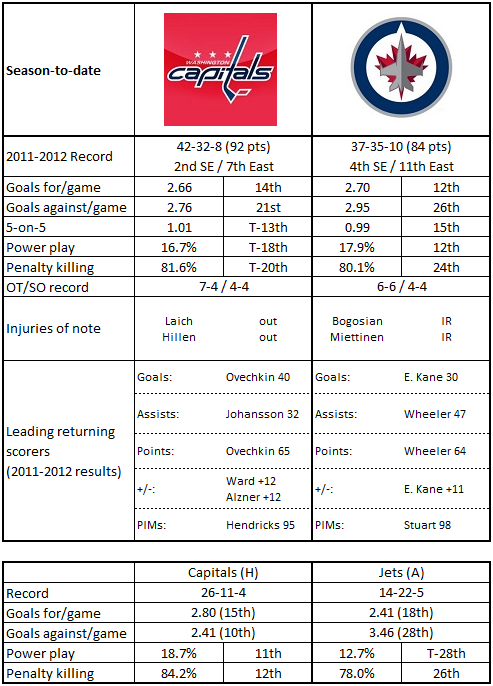 2.  Odd Winnipeg Stat… no team had fewer giveaways in road games last season than the Jets.  Now that might have been because they did not have the puck long enough to do much giving away, but still.

4.  Beware Evander Kane.  Kane has eight goals in 15 career games against the Caps, three in six games last season.  In two games so far this season Kane has 19 shot attempts, eight shots on goal, and no goals.  Pay attention, Caps.

5.  Winnipeg had the seventh highest number of shorthanded situations to kill off last season.  In two game so far they have had only four such situations with which to contend.  At the other end of the special teams scale the Jets scored on their first power play chance of the new season but are empty on their last nine power play opportunities, including one that carried into overtime in their 2-1 trick shot loss to Boston on Monday.

1.  No doubt the Caps will miss the 20 goals and 39 points Alexander Semin accumulated against the Jets/Thrashers over his career, but there is still Alex Ovechkin.  In 48 career games against Winnipeg/Atlanta he is 34-35-69, plus-6, including 14-13-27 on the power play.  He was 4-2-6, plus-2 in six games against the Jets last season.

3.  In three home games against the Jets last season the Caps scored a total of nine goals.  Departed players Alexander Semin, Dennis Wideman, Jeff Halpern, and Mike Knuble went 2-7-9 in those three games.  It might help that Alex Ovechkin and Jason Chimera will be on hand, having each scored three goals in those three games last season.

4.  It might be worth noting on the other hand that only one returning Capital defenseman playing in this game recorded a point in any of those three home games against the Jets last season.  John Carlson had an assist on the first goal in a 4-3 win over Winnipeg on November 23rd.  Dmitry Orlov also had one point over the three games last season, but he will not dress for this contest.

5.  The Caps allowed seven power play opportunities to the Tampa Bay Lightning in Saturday’s season opener.  Only twice last season did the Caps allow as many – eight opportunities for the Edmonton Oilers in a 2-1 loss that ended their seven-game winning streak to open the season (they allowed two power play goals), and seven for Montreal in a 3-0 shutout win.  Both instances, like that against Tampa Bay, came on the road.

Olli Jokinen has played in more the 1,100 games in the NHL, only six of them in the playoffs (with Calgary in 2009).  Winnipeg is hoping he can add to that total this season, and not with another team as a trading deadline asset to be moved (he joined the Jets last summer on a two-year/$9 million deal).  At one point in his career he was a durable player and a consistent point producer.  Over a six-season period from 2002-2003 through the 2008-2009 seasons he averaged 81 games played a year and had an average scoring line of 34-38-72.  Lately he has been just as durable, averaging those same 81 games a year over the past three seasons.  However, his scoring line is not what it was, averaging 18-37-55 over those same three seasons.  He did show improvement over those three seasons, though, from 15 to 23 goals and from 50 to 61 points.  If Winnipeg can get even last season’s numbers out of Jokinen (Winnipeg had no center with 50 points last season), they could be a playoff contender.

If the Capitals are to do better this year than last, the power play is going to have to improve.  If the power play is to improve, Nicklas Backstrom is going to have to be a big part of it.  And that is today’s topic – Nicklas Backstrom’s power play performance.  In 2008-2009 Backstrom was 14-28-42 on the power play on his way to his only career 100-point season.  He followed that up with 11-26-37 in 2009-2010, then 4-18-22 and 3-16-19.  The 19 points last season came in only 42 games, so there was the hint of a rebound there (a 6-31-37 pace over 82 games).  In the opener against Tampa Bay the Caps were 1-for-4 on the man advantage, but that goal was scored by Joel Ward with Wojtek Wolski and Mike Ribeiro being the other forwards on the ice.  The Caps managed seven power play shots on goal for the game, Backstrom getting none of them.  There looked to be a bit much of the back-and-forth between Backstrom and Mike Green on the power play, leading to some standing around.  This is where the learning curve under Adam Oates might be steepest and most in need of ironing out quickly if the Caps are to contend for a playoff spot.  And Backstrom will be a big part of that, too.

1.  Score first, score last, just make sure you don’t get passed.  Last season the Caps scored first in five of the six games against the Jets and managed only a 2-2-1 record in those games.  Part of the problem was that the Caps were outscored in the third period of those games by a combined 4-3.  The Caps need to do a better job closing teams out, certainly better than what was the case on Saturday when they allowed three goals to the Lightning to break what was a 3-3- tie after 40 minutes.

2.  Primary scoring.  One game does not a season make, but getting no points in the opener out of the top line of Alex Ovechkin, Nicklas Backstrom, and Marcus Johansson is not a formula for reliable success.  In fact, it was the first time in six seasons playing together that neither Ovechkin nor Backstrom had a point in the team’s season opener.  The Jets are a team that has not yet demonstrated an ability to defend well on the road (last night's effort notwithstanding).  These are the top weapons for the Caps.  They need to produce like it against this opponent.

3.  20-40-60.  The Jets are playing their third game in four days and will be playing the back half of a road back-to-back.  It would be nice to end the competitive portion of the game early, but if that is not in the cards, the Caps have to apply 60 minute pressure.  Even if this is Game 2 after a lengthy lockout (and lack of on-ice competition for a lot of players), the Caps should be the far more rested and ready team after having time off since Saturday.

In the end, the Caps cannot afford to lose games like this in a 48-game schedule.  The Jets are a division rival, the Caps get them at home having to fly in from Boston the night (or early morning) before, and the Caps have more talent at both ends of the ice.  The Jets played the Caps tough last season, but that might have been as much a function of a close-to-the vest style the Caps played under Dale Hunter than it was anything the Jets threw at the Caps.  Winnipeg is probably a somewhat better team defensively than is Tampa Bay, but that should not prevent the Caps from giving their fans something to cheer about tonight.

Posted by The Peerless at 9:27 PM No comments: