It was another Southeast Division matchup on Friday night as the Washington Capitals hosted the Winnipeg Jets.  The Jets were hoping to win their first game after dropping a pair of one-goal decisions in Winnipeg to the Carolina Hurricanes and the Chicago Blackhawks.  On the other hand, the Caps were aiming to improve on their 3-0-1 mark, the only blemish coming in a 3-2 Gimmick loss to Ottawa.

Neither team could seem to catch a break in the first period.  Alexander Burmistrov had his stick break just as he was about to wrist a shot at Caps goalie Michal Neuvirth on a breakaway in the game’s eighth minute.  Alex Ovechkin hit not one, but both posts on the same slap shot off a one-time feed from Nicklas Backstrom on a power play mid-way through the period.

Olli Jokinen missed a golden opportunity when Michal Neuvirth took a rare opportunity to try to play the puck behind his own net.  Losing sight of it, he lost it to Evander Kane, who sent a pass out to Jokinen.  With the cage empty, Jokinen had only to bat the biscuit into the cage, but the puck jumped over his stick as he swung and missed.

Mike Ribeiro was be foiled a short time later when he wristed a shot that caught goalie Ondrej Pavelec flush on the mask, the puck popping up and over the goalie.  Zach Bogosian was johnny-on-the-spot, though, to sweep the loose puck away just as it was about to cross the goal line.  The teams went off scoreless after the first period, but not for lack of odd bounces.

The second period followed a more conventional script, at least so far as the early going in the season was concerned.  For the fourth time in five games the Caps scored first. Mathieu Perreault recorded his first of the year when a rebound of a Joey Crabb shot squirted out to Pavelec’ left. Before he could cover the near post, Perreault stuffed the puck behind him.

It would be the only scoring of the period despite what became a march to the penalty box for both teams.  Each team was whistled for four minor penalties in the frame, but despite the ample opportunities to add to the scoreboard, neither team could capitalize.

The teams were on better behavior in the third period, but it did not make a difference on the scoreboard as the period opened.  Jason Chimera was foiled on a breakaway in the fifth minute of the period, and Perreault was denied by Pavelec trying to convert a 2-on-1 with Wojtek Wolski on the next shift.  Winnipeg wasted its chances as well, Kane shooting wide from point blank range at the nine-minute mark.

The Jets finally broke through when Dmitry Orlov lost control of the puck at the Jets’ blue line.  Kane did not squander this opportunity, pushing the puck out of Orlov’s reach and out into the neutral zone.  He beat Orlov to the puck and was scot-free on a breakaway.  His backhand over Neuvirth’s glove tied the game at 11:22 of the period.

The game might have have had its turning point as the clock was approaching the 15 minute mark of the period.  Roman Hamrlik was sent off for a double-minor for high-sticking Andrew Ladd behind the Washington net.  Michal Neuvirth took charge of the penalty kill for the Caps, turning away several excellent chances.  The best of them was a sparkling glove save when Kane faked circling around the net and tried to stuff the puck behind Neuvirth as he was about to slide across his crease to cover the far post.

The hard work was rewarded as the penalty was about to expire.  With Troy Brouwer and Nik Antropov scrapping for the puck along the boards, Brouwer kicked it out from under Antropov’s skate to the Capitals’ blue line.  Brooks Laich picked it up and headed up ice just as Hamrlik was coming out.  It was an unconventional 2-on-1 break, Tobias Enstrom back to defend the play for the Jets.  Laich sent the puck across to Hamrlik as the two crossed the Winnipeg blue line, and Hamrlik sent it back for Laich to fire over Pavelec’ blocker on the short side to give the Caps the lead at 18:59.

It would be all the Caps needed.  Jay Beagle got his first of the year on an empty net goal to close the scoring, the Caps pushing their record to 4-0-1 with the 3-1 win over the Jets. 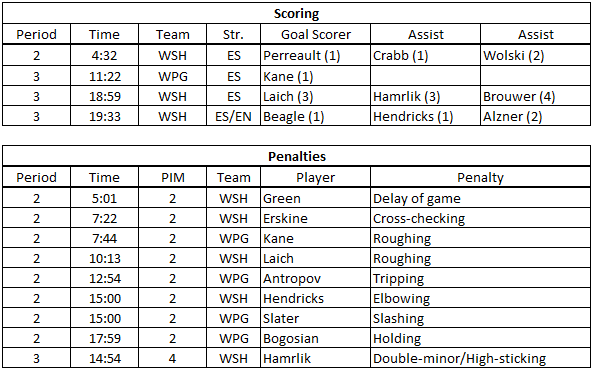