We caught some of Group B and all of Group A in today’s sessions at Kettler Capitals Iceplex, and rather than bore you, dear reader, with a thousand or so words about it, here is how we tweeted the proceedings (since not everyone has Twitter)...

Changing things up...first group was on public rink; nefarious plot to confuse bloggers (note, the Caps have been staggering the start times; this morning the first group started on the public rink, probably because Group A was going to get the Capitals rink since they are largely going to be the contingent playing Tuesday in Baltimore)

Might be 2/3 of "pain in the ass" line. RT @pckhdsthghts: I can see Halpern and Hendericks on the same line a lot this season.

Nice chill in here this AM...think I can see my breath (it was quite chilly in there this morning…real hockey like)

Are my eyes deceiving me, or is Bourque skating with another group, this time in green jersey? (Yup…Bourque had two sessions of hockey)

Grumpi Ovi...lost control of puck, yelled something, banged stick on glass. See what happens when you turn 26?...get irritable

Erskine top corner long side on Neuvirth...he's a wingah! (Note…on his next time down the ice, Erskine scored again, low to the stick side of Philipp Grubauer from in close).

Now Bourque wearing red jersey with no name plate...he must be stealth forward to be deployed vs NSH tomorrow

And Knuble now in gray...it's like watching Emmys for wardrobe changes

Semin from gray to red? Stop the insanity!

Looks like they're running PP against only goalie...four forwards, one D

The Caps later ran the power play against actual players, and for those wondering, no…Ovechkin was not skating on the left point. He was on the half wall for much of the drill or down low at the goal line. Coach Boudreau spent a fair amount of time with positioning and alignment. It did have a different look to it. 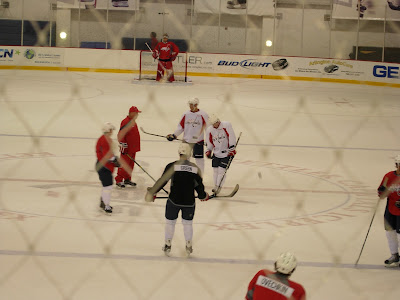 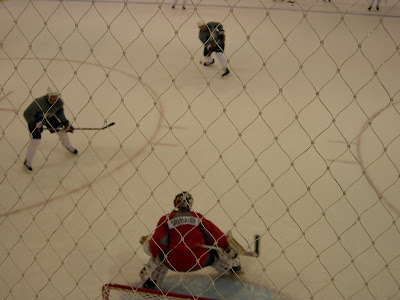 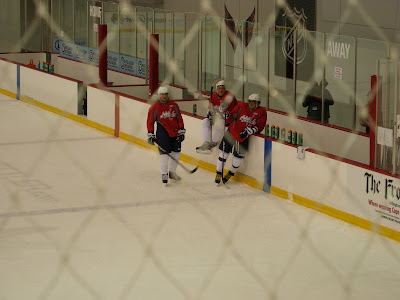 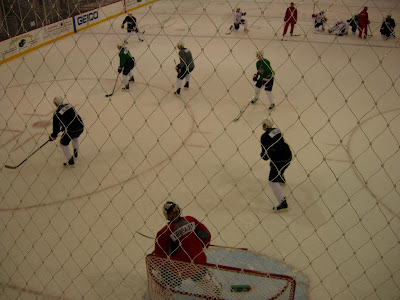 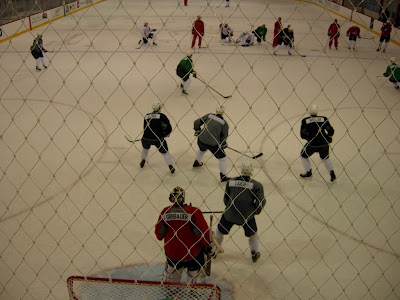 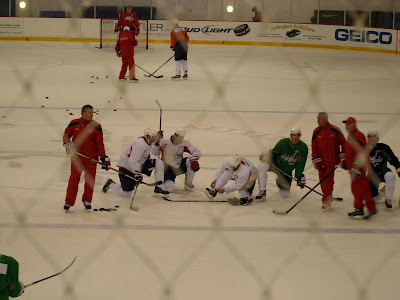 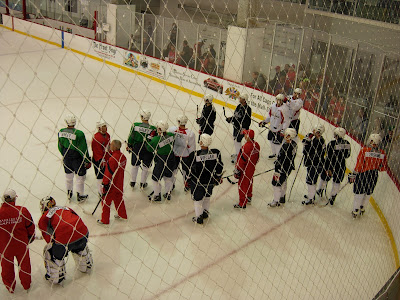 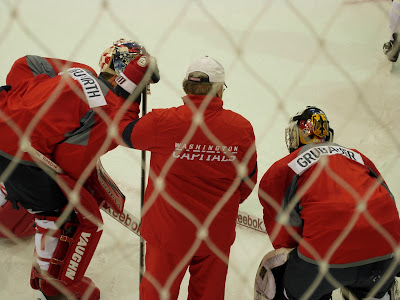 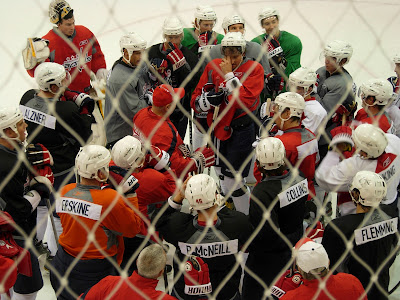 Posted by The Peerless at 2:35 PM No comments:

Theme: “We change, whether we like it or not.”
-- Ralph Waldo Emerson

Last year at this time, Troy Brouwer was coming to camp with the Chicago Blackhawks basking in the glow of a defending Stanley Cup champion. This year, he comes to camp for a team wanting to experience that glow. And he is expected to be one of the bricks-and-mortar pieces to see that that happens.

Complicating things right out of the gate is the fact that Brouwer suffered a shoulder injury in Game 79 of last season, against the Montreal Canadiens. It ended his regular season, but he did return for the first round of the 2011 playoffs against Vancouver. He was not healthy. As he put it at the time:

“It’s pain. But it’s dulled down quite a bit. A lot of the guys out there aren’t going to be 100 percent. I’ll just add to that list. You want to make sure you can go out and play properly and not be tentative out there. For me, that’s what the decision comes down to. I feel I’m ready to play.”

He was not especially effective in that Vancouver series, which the Blackhawks lost in seven games. He did not register a point in any of the seven games and managed only ten shots on goal. But here is the thing. His shoulder had been a problem much of the year, described by a physician as “symptomatic intermittently throughout the season.” In other words, a problem much of the year. He would have surgery for a labral tear on May 10th.

It might be ironic that Brouwer comes to the Capitals on the heels of shoulder surgery. The minutes he is replacing might be those that belonged to Eric Fehr, traded during the summer to Winnipeg. And the player occupying those minutes is a very different player than the one he is replacing. Fehr came into the NHL with a pedigree as a goal scorer in Canadian junior hockey. It was something that never materialized consistently at this level, and Fehr did not have enough variety in his game to make significant contributions in other areas.

Brouwer, on the other hand, does not come with a scorer’s pedigree. He is a banger. In his three full seasons he has been credited with 125 hits, 189 hits, and 262 hits (that last number led the Blackhawks last season and was fifth in the league).

If it is Fehr’s minutes that Brouwer is replacing, the offensive production he provides might not be altogether different from that of Fehr. In 230 NHL games Fehr averaged a shade more than 16 goals per 82 games played. Brouwer has 49 goals in 238 games, a shade under 17 per 82 games.

What Brouwer is not likely to get in Washington that he enjoyed in Chicago, though, is power play time. In three full seasons with the Blackhawks Brouwer scored 18 power play goals. He also averaged about 2:15 a game in power play time. If the Caps continue to give Alex Ovechkin, Nicklas Backsttrom, and Alexander Semin the lion’s share of the power play minutes among forwards, Brouwer will be battling with Brooks Laich, Mike Knuble, and perhaps even Joel Ward (who had five power play goals for Nashville last year) for additional minutes among the forwards.

Fearless’ Take: Little things. In each of the last two seasons not only did Brouwer finish in the top ten in hits among right wings, he finished in the top 20 in blocked shots as well. The highest a Cap right wing finished in blocked shots last season was Mike Knuble, who was tied for 32nd. And here’s a little tidbit. Of the 39 goals he scored over the past two seasons, 12 of them were game-winners.

Cheerless’ Take: Uh, what’s a “tid,” and why are there only ever “bits” of them? Whatever… In 17 career games against Southeast Division opponents, he has one goal (Against Carolina) and one assist (against Tampa Bay), both in the 2008-2009 season.

The Big Question… Will Brouwer’s shoulder hold up?

Shoulder injuries plagued Eric Fehr’s career with the Caps, and whether it had a direct effect or not, Fehr never matched the goal scoring promise he displayed in juniors. Brouwer has a much more physical component to his game, and the issue will be whether his surgically-repaired shoulder will stand up to the abuse. Brouwer isn’t a shrinking violet; he’s tough in two senses of the word. He is an enthusiastic hitter, and he is willing to play through pain, as evidenced by his playing in all seven playoff games for the Blackhawks last season with that bad shoulder. It is that toughness that the Caps count on as the benefit of the trade that brought Brouwer to Washington on draft day last June.

Brouwer is probably best suited to getting third line minutes at even strength. He might get occasional power play time, although if the minutes approach what he got in Chicago, it might be a signal of other problems on the power play. What he is bringing is not scoring with other skills and edge thrown in; he is bringing a rougher edge with perhaps the ability to chip in 15 goals. And that 15 goals should probably be considered his ceiling on this team. He won’t be getting the power play time that contributed to his goal totals in Chicago.

But whether he is a 15-goal scorer or a 20-goal scorer in the regular season hardly matters. Brouwer is here to bring the things the Caps did not have enough of in the post season. A certain toughness and edge to his game, doing the little things, and at least the threat of the occasional goal. When one says a team is built for the playoffs, it would have to include the kinds of things that are not flashy that a player like Troy Brouwer brings.