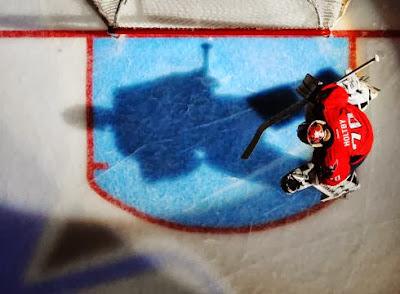 Today, they start playing for real for the 2013-2014 NHL season as a member of the new Metropolitan Division of the National Hockey League.  Are the Washington Capitals prepared?  We have reason to think they are.  Why?  There are several reasons.

This speaks to the heart of the lack of depth at the center position over the last several years.  Yes, last year Mike Ribeiro was quite effective on the power play; he led all NHL centers in power play assists and points last season.  But Ribeiro was 32nd in the league in even-strength points.  Small wonder.  Of 184 NHL centers playing in at least 20 games last season, Ribeiro was 156th in 5-on-5 Corsi/on-ice.  He was 158th in Corsi relative (on-ice less off-ice; numbers from behindthenet.ca).  The Caps ended up 10th in 5-on-5 goals-scored to goals-allowed ratio, right between Tampa Bay and Phoenix.

Now, you might say, “Peerless, Mikhail Grabovski was not a whole lot better.”  True, Grabovski was 164th among those centers last season in Corsi/on-ice at fives.  He was 81st in Corsi relative.  But that was as much a product (if not more) of the way Grabovski was used by Toronto Maple Leafs head coach Randy Carlyle – as a checking line player – than it was deficiency on the part of the player.  Go back to 2011-2012, when Grabovski was used more in a top-six role.  Among 164 centers playing in at least 40 games he was 30th in Corsi/on-ice at 5-on-5 and seventh in Corsi relative.  Washington’s possession numbers at 5-on-5 will be improved on the second line and thus will be improved overall.  That 5-on-5 goals-scored to goals-allowed ratio will improve.

Last season the Caps were tops in the league in the power play, converting almost 27 percent of their chances.  The easy argument to make here is that with Ribeiro – the league’s top power play point producer – having departed for Phoenix, the Caps’ power play will suffer.  This is where we make a distinction between “productivity” and “performance.”

It is entirely likely that the Caps will not convert as large a share of their chances this year as they did last season (a point to which we will return in a moment).  Their “outputs” (goals) as a share of “input’ (total chances) will be lower, and productivity will be down.  But ah, there is that whole possession thing again.  This is where we return to chances.  The Caps were 14th in the league in power play chances last season.  It took them that 26.8 percent conversion rate to sneak past Pittsburgh for the top spot in power play goals scored.  This season, with better possession numbers, one might expect more chances to draw penalties and more power play chances.

Two weeks ago, Alex Ovechkin turned 28.  It has been noted that his hair is marked with flecks of gray.    It is not the twilight of his career, by any means, but there is a bit more urgency to fill in the last big piece on his resume – a Stanley Cup.  The big stars in his draft cohort have their prizes.  Evgeni Malkin, taken with the pick after Ovechkin in 205, Sidney Crosby from 2005, Jonathan Toews, Jordan Staal, Patrick Kane, Drew Doughty.  All top five picks taken in the same draft or later than Ovechkin.

He is still performing at a high level.  Being last year’s Hart Trophy winner attests to that.  But he is a more settled player now – settled into his captaincy role, settled into his place in the ensemble.  He is still the straw that stirs the drink, but he is not as much the showman that he was when he was 23.  The maturity that comes with age might be the last piece he needs to push his team to the summit.

Every team has a core – often a combination of forwards and defensemen – on which it depends.  Chicago has Kane, Toews, and Duncan Keith.  Those players missed a combined total of three regular season games last season on their way to a Stanley Cup.  In Los Angeles, Anze Kopitar Dustin Brown, and Drew Doughty missed a total of five games on their march to a championship in 2012.  In 2011 Patrice Bergeron, Zdeno Chara, and Milan Lucic missed a combined six games.  In 2010 Kane, Toews and Keith missed a combined six games.  See a pattern?  Stanley Cup winners have good fortune when it comes to health.  The Caps are as healthy as they have been in recent years (Mike Green, we’re looking at you). Even Brooks Laich, who appears to have an annoying hip flexor problem, has not had a recurrence of his groin problems.

It’s not the “strength and honor” line you might remember from the movie, “Gladiator,” but this might be as important a theme for the Caps as it was for Roman soldiers.  At left wing their depth chart looks like Marcus Johansson, Brooks Laich, and Jason Chimera.  That is a group that combined for only ten goals in 90 man-games last season (Laich having health problems, Chimera not being able to find the net on 3.3 percent shooting).  But the year before they combined for 50 goals in 244 man games.  That a 17-goal average per 82-games.

At right wing the depth chart looks like Alex Ovechkin, Troy Brouwer, and Eric Fehr.  That trip accounted for 60 goals in 136 games last season, a 36-goal average per 82 games.  Brouwer might not repeat his career best goals per game from last year, but Ovechkin and Fehr are not far outside their performance comfort level.

The center depth is what is noteworthy, give the decade-long lack of it.  Nicklas Backstrom, Mikhail Grabovski, and (perhaps) Martin Erat are all players in their respective prime (Erat the oldest at 32, Backstrom the youngest at 25).  They are all experienced (1,512 regular season games of experience).  They are all productive; the three of them average as a group 20-41-60 per-82 games per man.

With this kind of depth among the three forward lines, head coach Adam Oates has options in finding the right chemistry.  The only set positions, one would think, are the first and second line centers, and the first line right wing.  After that, Oates has players who have demonstrated a level of performance to be not out of place anywhere among the top three forward lines.

The defense has more limited options, but there is an intriguing process that could unfold as the season moves along.  There is a question mark for the Caps after one gets past their top three of Mike Green, Karl Alzner, and John Carlson.  But, if you have lemons, make lemonade.  The Caps have a number of players who, if they have different skill sets (Jack Hillen at one end and, say, John Erskine at the other), enough experience among them in Hillen, Erskine, and Steve Oleksy to try to cobble together a functioning third pair.  Still, this is the weak underbelly of this team.  However, as we will see later, expect this to be addressed.

That sounds like the lost subtitle of a Star Wars movie (maybe between “Revenge of the Sith” and “A New Hope”), but here it applies to the Caps’ goaltending situation.  When it was Michal Neuvirth and Semyon Varlamov duking it out to see which would emerge as the number one goaltender, it was a case of two talented guys with next to no game experience at this level.  By the time Varlamov was traded to Colorado in 2011 he had played in only 59 regular season and 19 playoff games for the Caps over three seasons.  At the same time, Neuvirth had played in just 70 regular season and nine playoff games.  That is 157 games of total NHL experience.

Braden Holtby has 157 games of regular season game experience under his belt going into this season.  Plus, he served a complete apprenticeship, brought along deliberately by the Caps after his selection in the 2008 draft.  Perhaps more important, Holtby has been tested in the crucible of the post-season – much more than a goalie of his limited regular season experience might suggest.  He has 21 post season appearances in which he has posted a 2.04 goals against average and a .931 save percentage.  How many goalies have done better over the last two seasons?  Two: Jonathan Quick and Henrik Lundqvist.

Then there is Neuvirth.  He has added 51 games of experience since the Varlamov trade.  He has struggled some in those games (17-17-7 win-loss record, a GAA north of 2.50, a save percentage south of .910), but he has a lot more game and playoff experience than most backup goaltenders.  This is as solid a goaltending foundation as the Caps have had at any time since Olaf Kolzig left the club.

It is October.  Capital Nation is grousing about this move or that, this move not made or that.  Since 2007-2008, general manager George McPhee has added the following notables in-season… Cristobal Huet, Sergei Fedorov, Matt Cooke, Jason Chimera, Eric Belanger, Joe Corvo, Milan Jurcina, Scott Walker, Scott Hannan, Marco Sturm, Dennis Wideman, and Jason Arnott.  They will not be noisy about it, they will downplay their activity in the market, they will not let you see it coming, but it seems likely that they will be actively (if quietly) looking to tweak their roster further over the next five months.

The Rest of the Playbook

We cannot know at this moment if the Caps got the full Adam Oates treatment last season.  Intuitively, the lack of a full training camp, a cramped schedule, and unfamiliarity bred of newness could lead one to believe that there was still more in the playbook that was left to this season to introduce.  Adam Oates has had that full training camp.  He has a clearer picture of what he has here.  There could be some surprises or wrinkles left to spring.

This is as complete a squad the Washington Capitals have iced since their Stanley Cup finals team in 1998.  They have depth and versatility at forward.  They have very good and improving top end defense.  They have a healthy mix of youth and experience – in the same players – in goal.  They have an imaginative technician and effective communicator behind the bench.  They are not flashy, but they are active in player markets to address needs. 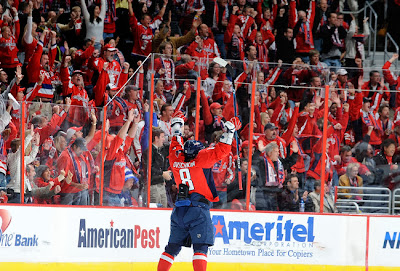