It was a good day to wear red at Kettler Capitals Iceplex, and we don’t just mean the fan apparel.   Team Red won today’s intrasquad scrimmage by a 7-3 margin on this, the penultimate day of Caps Development Camp 2013.

From the time Andre Burakovsky of Team Red faced off with Justin Larson of Team White to start the contest, it was going to be a long day for the men in white.  Team White did have some early success early, but a fundamental mistake cost them the game’s first goal.  Chandler Stephenson broke up a pass thrown through the middle and headed off on a breakaway, scoring on the play to give Team Red an early 1-0 lead.

Team White evened the contest at a goal apiece when Riley Barber converted a pretty centering feed from Matt Petgrave, but Team Red regained the lead it would not relinquish when Conor MacPhee finished a 2-on-1 break with Travis Boyd.

After Team Red scored again on a goal-mouth scramble to make it 3-1, Stephane Legault made it 4-1 for The Red Men and threatened to turn the game into a rout.  But with last seconds of the period ticking off, Michal Cajkovsky of Team White let fly with a bomb from the left point through a maze of bodies to cut the lead to two goals with 4.3 seconds left in the period.  His was the most animated goal celebration of the day.  At the first intermission, it was Team Red: 4 – Team White: 2.

We should note one other thing about the first period.  Matt Petgrave laid quite a hip check on Brandon Tanev who flew into the air, went completely upside down, skates pointed to the ceiling, and came down in what could have been an unfortunate manner.  But, these being youngsters, he popped up and jumped right back into the play.

Period two started with missed chances on both sides.  Early on, there was a pile up of bodies in front of Team Red goalie Brandon Anderson, with the puck lying still just a foot off the left post, but White could not convert the opportunity before the puck was swept away.  At the other end, Zach Sanford of Team Red had a chance on a backhand to the left of goalie Sergei Kostenko, but his shot hit the near post and bounced away.

At the ten-minute mark (9:47 left, actually), Anderson and Kostenko retired to their respective benches in favor of Louis-Philip Guindon for Team Red and Clarke Saunders for Team White.  It was Team Red taking first advantage of the change in goal, although Saunders was left hanging out to dry on the play.  Caleb Herbert crossed wires with a teammate at the blue line, and the puck slid away from him, outside of his reach just enough for Stephenson to grab it and take off on another breakaway.  He made it 2-for-2 in conversions, and Team Red had a 5-2 lead.

On the next shift, though, Chance Braid got it back for Team White with a put-back from the doorstep to make it 5-3, Team Red.  Later, Stephenson would get his chance for the hat trick with a semi-break, but was unable to convert the opportunity.  He did, however, draw a penalty on the play.  Team Red was not able to convert the man advantage opportunity, but they did carry that 5-3 lead into the second intermission.

The pace seemed to pick up a bit in the third, and it was Team Red with the first early chance.  Andre Burakovsky and Tom Wilson carried the puck in on a 2-on-1 rush, but when Burakovsky slid the puck over to Wilson, Michal Cajkovsky displayed his talent in the defensive end in addition to his booming shot by tying up Wilson before he could get a shot off.

Turnovers, though, were a problem for Team White all day, and they committed another, giving Zach Harnden a chance to display his breakaway skills.  He converted the chance to make it 6-3, Team Red.

With the clock winding down, Team White did create some chances, but in one instance a puck rolled off a stick in the low slot, and in another a one-timer was shanked wide.  That made for a desperate Team White, but they got another chance with a late power play.  It was an opportunity to create a 6-on-4 advantage when they pulled Saunders for the extra attacker.  But despite the two-man advantage in numbers, it was Tom Wilson who would score for Team Red, burying a shorthanded empty net shot to give Team Red their final 7-3 margin.

It was a well-attended contest at KCI, and the boys put on a show.  This might be, as head coach Adam Oates suggested earlier in the week, more of a getting to know sort of week than evaluation – players getting to know the organization and the system, as well as getting valuable advice on their game, their training, and their nutrition, and for the organization to get a closer look at just what they have in terms of prospects.  But for the boys, it is a chance to impress, to perhaps get another look down the road and perhaps a contract, if the fates are kind.  Whatever the motivation, it was a very entertaining contest, indeed.

Posted by The Peerless at 3:50 PM No comments:

We have completed three parts in the look at Washington Capitals draft picks over the 2001-2010 period, and now, in Part IV, we will take a look at what we might call the “diamonds in the rough” portion of the draft – the fourth and fifth rounds.  This is a portion of the draft where the odds of making it as a contributing NHL player (by our definition, one who dressed for at least 100 NHL games) decrease markedly.  Whereas almost 20 percent of the players selected in the second and third rounds reached that 100-game threshold, the chances of a player doing so in the fourth and fifth rounds is cut almost in half – 10.3 percent of the players drafted reaching that milestone. Before we get to comparisons with the rest of the league, let us take a look at the Washington Capitals and their fourth and fifth round draft picks over the 2001-2010 period.

If the second and third rounds were something of a “desert” for the Caps in terms of drafting players who made contributions at the NHL level, things were no better in the fourth and fifth rounds of the 2001-2010 period.  Combined, the Caps selected 23 players in those rounds over the ten-year period, three of whom dressed for at least one NHL game.  None made it to the 100 game threshold we established as the basis for a “contributor.”

While it is true that left wing Oskar Osala managed only three games in the NHL (he currently plays for HC Neftekhimik Nizhnekamsk of the Kontinental Hockey League), there are those 57 games played so far by current number one goaltender Braden Holtby.  Selected in the fourth round in 2008 (93rd overall), Holtby is the third goaltender drafted by the Caps in the 2001-2010 period to appear in at least one NHL game.  To date he has 57 regular season appearances and has posted a respectable record.  Of goaltenders appearing in at least 50 games over their first three seasons since 2000-2001, only two goaltenders – Marty Turco and Tuukka Rask – recorded a better save percentage than Holtby over those first three seasons of their careers.  He is tied for 13th among that group in goal-against average.

There is also Philipp Grubauer, another goaltender.  His contributions are likely to be some years away, so writing him off as a potential “contributor” is premature.

However, that’s it.  The jury is still out on such draftees as Patrick Wey (115th overall in 2009) and Caleb Herbert (142nd overall in 2010), but none of the other 21 players taken in the fourth or fifth round by the Caps have appeared in an NHL game to date.

So, how does the Caps’ performance in these rounds compare to that of the other 29 teams?  Here are the teams, ranked in order of the number of selections made in the fourth and fifth rounds: 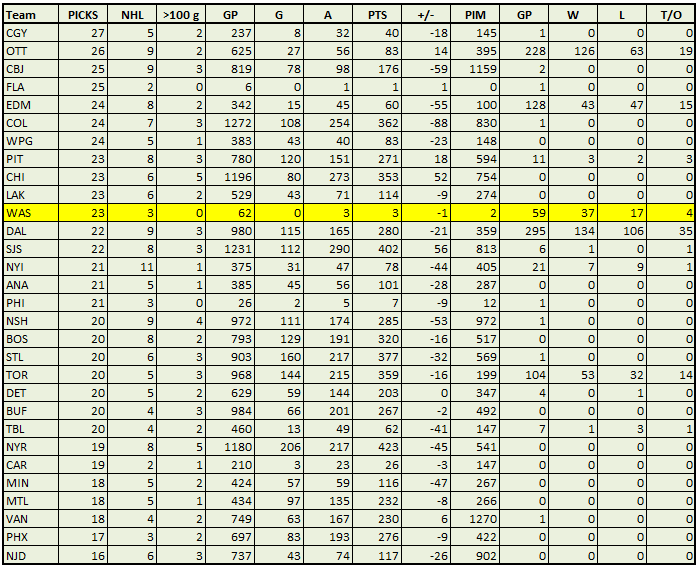 The Caps rank in the upper half of teams in terms of selections made in the fourth and fifth rounds.  However, they have not had much success in terms of those picks making it to the NHL.  Only two teams have had fewer of their selections in this tranche appear in an NHL game (coincidentally, both of them being former Southeast Division teams – Carolina and Florida), and the Caps are one of only three teams not to have any of their selections reach the 100-games played threshold.

The Caps have had next to no production out of skaters in this part of the draft, owing to the fact that only one skater – Oskar Osala – played in any NHL games (three in all with a 0-3-3 scoring line).  Even among goalies, though, the Caps’ Braden Holtby and Philipp Grubauer combined rank only fifth in total games played in this group.  The best that can be said here is that Holtby and Grubauer have their futures ahead of them and might yet be solid and reliable contributors down the road. 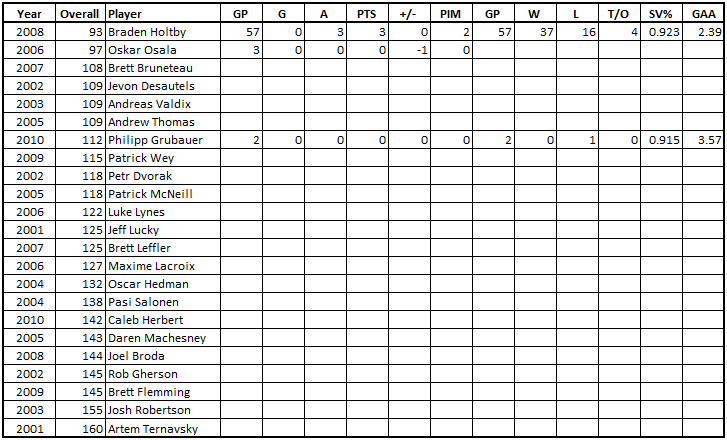 This is not going to be a particular rich source of NHL contributors.  Only the New York Rangers and Chicago Blackhawks have has as many as five players selected in the fourth and fifth rounds appear in at least 100 games. And as we noted, barely 10 percent of the players taken in these rounds make it to that 100-game mark.

Then there is the matter of impact players.  Given where teams are drafting, the likelihood of finding an impact player as we defined it in the look at second and third round picks (100 games, 50 goals, 100 points).  We might lower the threshold here to 100 games, 20 goals, and 50 points to find reliable, if not “impact,” NHL players.  Here is that list: 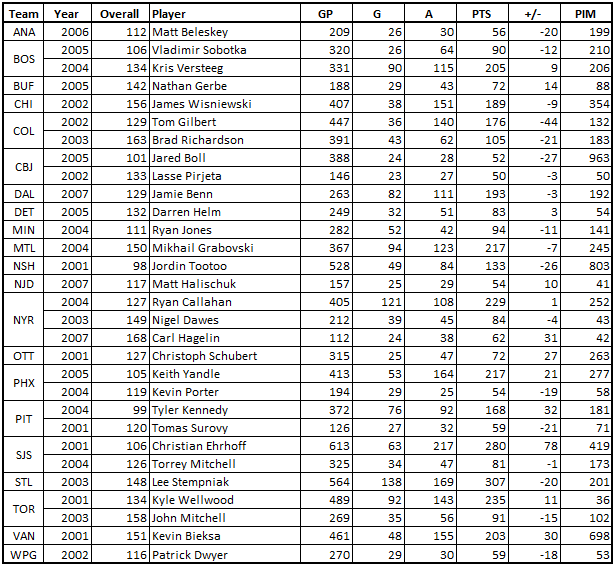 The likelihood of finding players to meet these criteria is low, but not unheard of. There were 30 players selected by 21 teams who did meet these criteria.  We have to allow for a bit of flexibility here, too, since intuitively one would expect such players to have longer lead times in lower leagues before making their NHL debuts and establishing themselves.  If we were more tolerant in that regard, we might include such players as these:

Again, the Capitals are not among the teams having drafted skaters who meet even the lower threshold of reliable player, and it is no certainty that any skaters in their system will reach that level of contribution.  The default answer here is that, well, there are all those first round draft pick encumbering roster spots.  That argument fails to account for: a) the fact that only half of their 16 first round picks over this period are in the Caps system (and that includes Evgeni Kuznetsov), and b) that Caps draftees, even if they had been crowded out on the parent roster, have not caught on with other clubs to make their contributions.  Remember, we are focusing on the players drafted by their clubs, regardless of where they might have moved, not their contributions solely within the systems of the teams that drafted them.

In the end, what we are left with is another example of an unproductive tranche of the draft.  From the second through the fifth rounds over the 2001-2010 period the Capitals drafted 44 players and have had three of them record as many as 100 games in the NHL, only one of whom is with the club today (goalie Michal Neuvirth).  Another goalie – Braden Holtby – appears certain to hit that games-played mark, but the record in drafting skaters has been rough finding diamonds in the rough.