The Peerless Prognosticator is ON THE AIR!!! -- Game 51: Capitals at Devils, January 24th

The Washington Capitals take to the road once more after their brief (one game) respite in the friendly confines of Verizon Center.  This trip starts with a game in Newark, New Jersey, the Paris of Essex County.  There, in “Brick City,” the Capitals will visit the New Jersey Devils who, like the Capitals, have had a spotty start to the new calendar year.

Despite handing the St. Louis Blues their worst loss of the season in a 7-1 decision last Tuesday, the Devils are only 4-3-3 in 2014.  It was out of character for the Devils to lay that kind of thumping on an opponent.  The seven goals was the most scored by New Jersey since putting up seven against the New York Islanders back on April 10, 2010, in a 7-1 win.  The six-goal margin of victory was the widest for the Devils since that same win over the Islanders.

The Devils have had a relatively small circle of scorers in the 2014 portion of their season.  Over the last ten games 12 different skaters shared in the 25 goals.  The odd part of that is that only nine players had goals in the first nine of those games.  It was not until Game 10, that 7-1 pasting of St. Louis, that the Devils broke out and expanded their goal-scoring offering with three additional players – Mark Fayne, Damien Brunner, and Ryan Carter – scoring their first goals of the month.

Overall, Adam Henrique and Michael Ryder share the lead in goals in January with four apiece for the Devils.  Henrique is having a decent season after a disappointing sophomore season in which he was 11-5-16 in 42 games.  Henrique, you will remember, was a Calder Trophy finalist in his rookie season.  Through 51 games this season he is 13-12-25, his 13 goals being third on the team.  He has three goals in his last five games (3-1-4) and is 1-3-4 in seven career games against the Capitals.

Ryder is at the other end of the experience spectrum.  The ten-year veteran has 728 games with four different teams on his resume.  This is his first year with the Devils, and he is tied for the team lead in goals with Jaromir Jagr.  The odd part of his being tied for the team lead in goals this month is that he does not have one in his last five games, his longest drought since an 11-game streak that ended with the first Devils’ game in December.  Ryder has been quietly effective over his career against the Caps, scoring 15 goals in 30 career games (15-6-21).

Goaltending for the Devils is in transition.  Cory Schneider was obtained from Vancouver in a surprising draft day trade last summer that snared the ninth-overall pick for the Canucks (Bo Horvat).  Schneider was immediately designated Martin Brodeur’s successor to be.  It is the succeeding part that has dragged on this season through 51 games.  Seems that: a) Brodeur was not entirely ready to abdicate his position, and b)… well, there really is no “b.”

The two have roughly split appearances down the middle, Brodeur with 27 and Schneider with 24.  Schneider is the one with the better numbers and the worse luck.  In his 24 appearances he has a better goals against average than Brodeur (1.88 to 2.36) and a better save percentage (.926 to .905). However, his record is 8-9-7, while Brodeur’s is 13-10-4.  Only once this season, that being on December 23rd against Chicago when he allowed five goals on 37 shots, has Schneider allowed more than three goals in a game.  What he has benefited from is light work.  Only six times in 24 appearances has he faced more than 30 shots on goal.  On the other hand, Schneider, who is expected to get Friday’s start against the Caps, has been lights out (as in “goal lights”) over his last seven appearances.  He is 4-1-2 over those seven games, 1.11, .960, with one shutout, and has not allowed more than two goals in any game.  He has no career decisions against the Caps.
Here is how the teams compare overall... 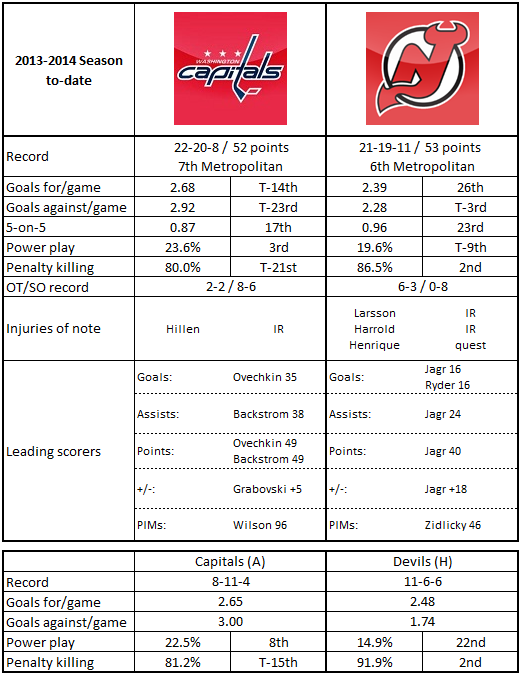 2.  New Jersey’s offense leaves a bit to be desired.  Only three teams have scored fewer goals at 5-on-5.  They might be better served to play at 4-on-4.  Only five teams have more goals scored at 4-on-4 than the Devils.

3.  Despite being a team that plays low-scoring games, New Jersey is 28th of 30 teams in winning percentage in one-goal games (12-9-11).  A big problem is that they are 0-8 in the trick shot competition.  They are not just bad in this phase of the game, they are historically bad.  One goal on 25 shots taken (Reid Boucher…seriously).  Until this season the worst shooting percentage in the freestyle competition for a season was in 2006-2007 when Carolina finished with one goal on 17 shots (5.9 percent).  The Devils also happen to have the third worst save percentage in the Gimmick (.560).

1.  The road has been unkind to the Caps lately.  Since winning consecutive road games against the Islanders and Rangers across a nine-day period in late November/early-December, the Caps are 2-6-2 on the road and have been outscored, 34-22, in those ten games.

3.  If this contest goes to the extra-extra time, the Caps still have a fine record.  Washington is tied for second in wins (eight) and third in shooting percentage (40.4 percent).  They fall a bit short on save percentage, where they are tied for 20th.  After winning their first four Gimmicks of the season, the Caps are 4-6 since, and they are currently on a three-game losing streak in this phase of the game.  The Caps have lost their last five extra-time games, overall, including two games settled in overtime.

Somewhere, deep in the bowels of Prudential Center, perhaps, there hangs a portrait of Jaromir Jagr, the image wizened with age, hair turned thinning and gray, his posture stooped.  OK, so he is not the second coming of Dorian Gray.  But heavens, he is going to be 42 years old in a few weeks, and he leads the Devils in goals, assists, points, plus-minus, and game-winning goals.  He is doing it while still averaging more than 19 minutes of ice time a night.  OK, so it is on a team that is otherwise offensively challenged, but it is still a remarkable performance so far.  He comes into this games with goals in three of his last four games (3-1-4) and is 30-58-88 in 71 career games against the Caps.

In the Capitals’ last road win, Eric Fehr had a pair of goals, including the game-winner with under a minute to play.  That was the last time Fehr lit the lamp as he enters this game on a seven-game streak without a goal.  If Alex Ovechkin misses his second straight game, the Caps need someone to act as a finisher.  Fehr could inherit that role, especially if he mans the trigger spot in the left wing circle on the power play.

1.  Score first.  Self-explanatory; the Devils simply are not a comeback sort of club.

2.  Be crisp and consistent.  The Devils are a club with a long history of using the same formula for success.  Strangle a club in the neutral zone, deny them opportunities to get into a flow.  If the Caps try to connect on long bombs through the neutral zone, they’re going to find themselves on the wrong side of possession in a big way.  Crisp passing, consistent application of a simple game plan.

3.  No softies.  In a low scoring game, which this would seem likely to be, the odd lackadaisical goal allowed is crippling.  None of that tonight.

The Devils actually provide a suitable foil for the Caps at this point of their losing streak.  Winning is going to be the product of simple, basic, fundamental, not to mention persistent hockey.  Simply put, if the Caps don’t play such a game, they don’t win.  The Devils might lack flash, but they don’t beat themselves that way.