On Friday night the Washington Capitals looked to get back on the winning track with a visit to Detroit to take on the Red Wings at Joe Louis Arena.  The Caps, losers on Wednesday night to the New York Rangers by a 3-2 margin, would be facing a team that was in the midst of a seven-game home stand that saw them go 3-0-1 in their first four contests.

The teams started the game like prize fighters circling one another for an opening.  Neither team recorded a shot in the first five minutes.  The game opened up a little bit after that, though, and it was the Red Wings that scored first.  Valteri Filppula was the exclamation point on a tic-tac-toe passing play that started with Carl Colaiacovo at the top of the right wing circle.  His pass to Mikael Samuelsson was redirected onto the stick of Filppula, who shoveled the puck into the far side of the net from the edge of the left wing circle before goalie Michal Neuvirth could get across his crease.

Less than two minutes later the Caps tied the score.  Mike Ribeiro notched his sixth of the year after some gritty work by Brooks Laich in front to keep the puck from being covered by Detroit goalie Jimmy Howard.  Laich had several whacks at the puck, and although he could not find a hole in Howard’s pads, his last whack caromed to Howard’s right where Ribeiro was alone to stuff he puck inside the post at the 11:01 mark of the period.  That would be the last of the scoring in the first period, the reams tied at one goal apiece and the Red Wings having a 9-4 edge in shots on goal.

The second period looked a lot different from the first, at least for the home team.  The Red Wings came out of the locker room flying.  They recorded the first eight shots of the period, but none managed to find its way past Neuvirth, who was single-handedly keeping the Caps in the contest.  He could not keep his net entirely clean, though.  The Red Wings’ ability to control the puck in the offensive zone for long stretches paid dividends late in the period when Kyle Quincey threw a harmless looking shot toward the net that appeared to be going wide to Neuvirth’s right.  The puck struck Cory Emmerton’s left skate, however, and changed direction just enough to sneak through Neuvirth’s skates for the tie-breaking goal at 16:04.  It would be the only goal the Red Wings would record in the period, a surprising result given that the Wings would outshoot the Caps by a 19-6.

The Caps took advantage of Neuvirth’s stonewalling the Wings in the second period by tying the game just 68 seconds after the intermission.  Alex Ovechkin took a pass from Mike Green at his own blue line and started up ice with Jonathan Ericsson back for the Wings.  Ovechkin freight-trained his way up ice, pushing Ericsson back.  As he crossed the blue line he feinted a cut to the middle and slid the puck through Ericsson’s skates.  Picking it up on the other side of Ericsson in the left wing circle, Ovechkin rifled a wrist shot to the long side of Howard and inside the far post to tie the game.

That was the way the game stood for almost 16 minutes.  But with just over three minutes remaining the Wings broke the tie when Pavel Datsyuk got his stick in the way of a cross-ice pass from Mike Green to Roman Hamrlik.  Datsyuk split the defense and skated in alone on Neuvirth on a clean breakaway, finishing off the play with a deke that drew Neuvirth off balance enough to give Datsyuk an opening to slide the puck through and into the back of the net at 16:59.

The Caps could manage little pressure after that, recording only one shot on goal in the last 3:01, and the Red Wings extended their home streak of not losing in regulation to five games with a 3-2 win over the Caps. 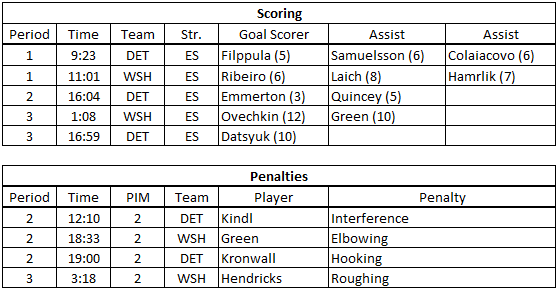 Posted by The Peerless at 4:35 PM No comments: