“While the players believe Boston Bruins owner Jeremy Jacobs is calling the shots, an educated guess at the final group includes but may not be limited to Anaheim, Columbus, Florida, the Islanders, Phoenix, St. Louis, Washington and Dallas -- enough to block any agreement from getting done…”

In the October 31st edition of his incomparable “30 Thoughts” weekly series, Elliotte Friedman of CBC Sports speculated on who, in addition to Boston Bruins owner Jeremy Jacobs, might be driving a hard line from the league’s side of the table in the continuing labor conflict between the National Hockey League and the NHL Players Association.

Why these teams?  Geographically, they are diverse.  All four time zones are represented – the Islanders, Washington, Columbus, and Florida in the East; Dallas and St. Louis in the Central; Phoenix in the Mountain zone; and Anaheim in the West.  Not all are “sunbelt” states with Washington, the Islanders, St. Louis, and Columbus being eastern or Midwestern cities.  They represent different waves of expansion, ranging from St. Louis entering the league in the first expansion from the Original Six to Columbus entering the league in the latest wave in 2000-2001.

It is that notion of the last expansion wave that hints at a possible reason why these teams might be the basis for a hard line cohort.  The 2000-2001 expansion wave that brought Columbus and the Nashville Predators into the league made the NHL a 30 team league.  A league of 30 teams might be expected to have a range of vitality and viability among its members.  And in a league whose success is still largely a function of gate receipts, attendance matters.  It is here where the clubs have something in common – misfortune, or the memory of it in the 30-team era.

Here are the attendance rankings of these eight teams (average paid attendance for home dates) over the 11 seasons since the last wave of expansion: 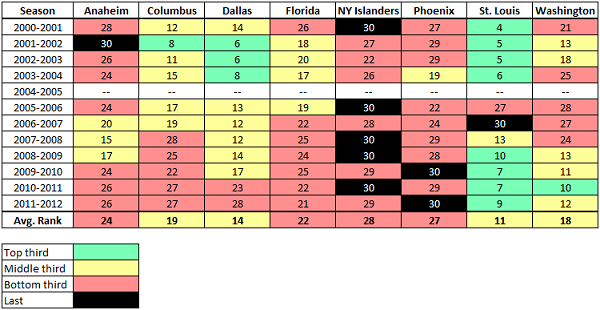 It his helpful to consider these rankings in terms of how those rankings fall into the top, middle, and bottom third.  We color coded the individual rankings in accordance with their respective placement among the thirds, red for bottom third, yellow for middle third, and green for top third.  We also highlighted in black the instances in which any of these teams finished 30th and last in attendance.

There is a lot of red and black in that table – 50 instances, in fact, or the total of 88 instances (57 percent).  Four of the teams have finished last at least once, and one of this group finished last in nine of the 11 seasons of the 30-team era (the Islanders a total of five times).

And the numbers are even more daunting in the post-Lockout I, “cost-certainty” era for these teams.  There are 36 instances out of 56 in which these teams finished in the bottom third in attendance (64 percent).  Turned on its head, these eight teams had eight instances in 32 pre-lockout in which they ranked in the top third (25 percent), only five in 56 instances since the 2004-2005 lockout (nine percent).

Looking at the teams individually, five of them – Anaheim, Columbus, Florida, the Islanders, and Phoenix have done especially poorly.  Since Lockout I, none of these five teams have had as much as a single season in the top third of the league in attendance.  Six times in seven seasons they finished last – the Islanders four times and Phoenix twice.  Two – Dallas and Washington – might have what might be mirror images of “success effect.”  The Stars reached the playoffs six time in seven seasons from 2000-2001 through 2007-2008.  Over that period they finished in the top third in attendance three times and in the middle third on four other occasions.

However, Dallas has not reached the playoffs in any of the past four seasons.  Concurrently, their attendance has dropped from 12th in their last playoff year to 14th to 17th to 23rd to 28th last season.  Lack of success has been met with lack of attendance.

On the other hand, Washington stuggled on the ice and at the gate in the early part of the 11-season, 30-team era.  In the first seven seasons of this period (from 2000-2001 through 2007-2008) the Caps did manage to make the playoffs in 2000-2001 and 2002-2003 but were first-round exits each time, adding to a long history of playoff underachievement.  Then there was the club’s rebuild that had them losing games by the bushel on the ice and fans by the hundreds in the stands.  In five of the first seven seasons of the 30-team era the Caps were in the bottom third in attendance five times and never ranked higher than 13th.

Then they started winning.  The Caps finished 24th in attendance in the 2007-2008 season, even though they made the playoffs.  But their attendance late that season reflected their changing fortunes.  The Caps made the playoffs in each of the next four seasons, their attendance at least climbing into the middle third and even the top third once (10th in 2010-2011).  That they were not ranked higher is a product of arena size, since the Caps’ winning trend in the regular season has been accompanied by a long sellout streak.

For Dallas and Washington, the formula is clearly win, and the fans are in.  The last team in this eight-team group – the St. Louis Blues – presents a unique situation, but not so unique as to be too far apart from the other seven teams.  The Blues are a team that did quite well before Lockout I.  In each of the first four seasons in the 30-team era the Blues were a top-third team in attendance, never finishing lower than sixth.  But then there was that lockout.  Coming out of the season-long hiatus the Blues were not very good.  In the first three years after Lockout I the Blues did not make the playoffs in any of them.  Perhaps not coincidentally, they ranked 27th and 30th in attendance before jumping back to 13th in 2007-2008.  One has to wonder if that experience – trying to regain a foothold after the lockout – won’t be repeated if this lockout continues indefinitely, especially in a town that is much more a baseball town than it is a hockey town.

What Elliotte Friedman has done in identifying what might be a hardline cadre among NHL owners is also to identify a collection of teams that suffer varying degrees of systemic problems with attendance.  Within a certain range, performance at the gate is one thing that these teams have in common.  The most serious problems exist in the sunbelt rim of Anaheim, Florida, and Phoenix, with perennial whipping boys Columbus and the New York Islanders thrown in (although the Islanders should benefit from a move out of their obsolete arena on Long Island in favor of a new facility in Brooklyn).  For the others, attendance is a hot house flower that seems not to thrive nearly so well when things aren’t going well, or if there are other things (like Cardinals baseball) for fans to do.

Posted by The Peerless at 10:05 AM No comments: