If familiarity breeds contempt, the Washington Capitals and the New York Rangers have extra measures of contempt for one another.  Friday night’s second half of a home-and-home series was the ninth time the Caps have faced the Rangers in their last 24 games going back to the Eastern Conference semifinals in last spring’s Stanley Cup tournament.

The Caps were looking to even the score in this year’s series after dropping a 4-2 decision on Wednesday night.  On Friday the Caps would face Henrik Lundqvist in goal for the first time this season, the Caps countering with Braden Holtby in his second straight start.

The goalies were sharp to open the game, but neither team could get much flow going in their offensive games, either.  The uninspired play early was jolted to life when the Rangers had the puck deep in the Capitals’ end.  Former Cap Jeff Halpern won a battle against Matt Hendricks behind the Caps’ net and nudged the puck in front where Mike Rupp was fighting for position.  Rupp took several whacks at the puck, a couple of them coming after Holtby covered it.  For his efforts Rupp was treated to Holtby’s blocker to his face, and Rupp responded with a two-hander to Holtby’s pads.  Jason Chimera jumped in to challenge Rupp, and Taylor Pyatt joined in to try to pull Chimera off Rupp.  All four were whistled for minors – Rupp for slashing and the others for roughing – at 6:29 of the first period.

It would not be the end of the march to the penalty box, at least for the home team.  Mathieu Perreault was sent off at 12:23 for hooking, and Jack Hillen took a seat at 18:32 for the same offense.  The Rangers could convert neither opportunity, though, and the teams went off scoreless after 20 minutes.

It was more of the same in the second period in terms of offensive flow, or lack of it.  It did not lack for physical intensity, though, as each team got their licks in.  Troy Brouwer had a highlight reel hit on Bryan Boyle that dropped the larger forward in front of the players’ benches.  Ryan Callahan had a similar hit on Joey Crabb that had the Washington forward skating slowly to the bench.  It kept the Verizon Center crowd entertained, but it did nothing to turn on the red light behind either goaltender. The teams remained scoreless after two periods.

If the first forty minutes were lacking in offensive fireworks, they were set off quickly in the third period.  It started when John Carlson was sent to the penalty box for two minutes seventy seconds into the period.  Rick Nash converted for the Rangers when Mike Richards found him in the high slot with a pass from the goal line to Holtby’s left.

Less than a minute later the Rangers struck again with Brian Boyle doing the dirty work in front and chipping a loose puck over Holtby, who was sprawled at the top of his crease trying to cover the biscuit.

It could have become a blowout after that, but the Caps came right back barely 20 seconds later.  Alex Ovechkin took a long lead pass from Nicklas Backstrom, and taking a page out of the early years of his career book rifled a wrist shot through Ryan McDonagh’s legs and past Lundqvist’s blocker to bring the Caps within a goal.

Mike Green got the Caps even 1:20 later after Dan Girardi took a holding penalty.  Green’s wrist shot from the top of the right wing circle hit Ranger defenseman Marc Staal in front and dipped though Lundqvist’s pads.

The goal seemed to shift the momentum in the Caps’ direction, but Lundqvist was up to the challenge, denying Brooks Laich on a point blank attempt at the 11 minute mark and Marcus Johansson on an attempted wrap-around a minute later.  Lundqvist’s ability to frustrate the Caps paid dividends late when Marian Gaborik wired a wrist shot over Braden Holtby’s blocker with less than two minutes remaining to give the Rangers the apparent winning margin.  However, with Holtby on the bench for an extra attacker Mike Green fired a shot into a scrum of players in front of Lundqvist.  The Caps converged at the top of the crease trying to poke the puck past the Ranger goalie.  It squirted out to a wide-open Alex Ovechkin at the edge of the left wing circle, and before Lundqvist could locate the puck it was in the back of his net off an Ovechkin snap shot with just 4.8 seconds left in regulation.

The teams went to overtime looking to end things early.  The Rangers put heavy pressure on Holtby to start the extra session, the Caps’ netminder making a big glove save on Gaborik in the first minute.  The Caps started to turn things around in the second half of the overtime, Mathieu Perreault getting a scoring opportunity to Lundqvist’s left that was turned aside.  But with the clock winding down under 30 seconds Ryan Callahan wound up and fired a slap shot that seemed to handcuff Holtby.  The Caps’ goaltender gave up a long rebound to his right that landed on the stick of Derek Stepan.  The Ranger forward had a lot of open net to shoot at, and he did not miss, sending the puck back in the direction from which it came and into the back of the net to give the Rangers their second straight win over the Caps, 4-3. 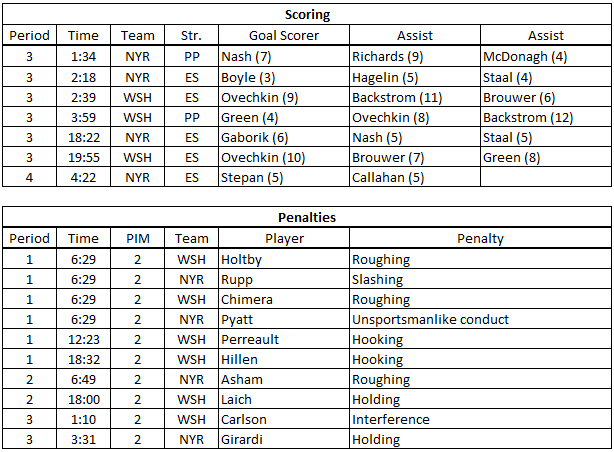 Posted by The Peerless at 11:42 PM No comments: