Capitals vs. Penguins in Game 1: How Must is "Must?" A Look Back at Games 1

According to the Web site, whowins.com, going into this year’s NHL postseason teams winning the first game of their best-of-seven series won their series almost 70 percent of the time.  So winning Game 1 matters, right?

No.  Not for the Washington Capitals when facing the Pittsburgh Penguins.  Ten times the Caps took the ice against the Penguins in a Game 1.  Here are the results for those games and those series… 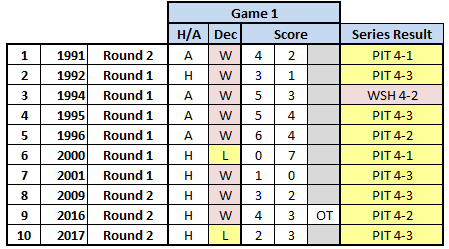 Not pretty, is it?  This year’s Game 1 will have an interesting twist with the Penguins missing key pieces, Evgeni Malkin and Carl Hagelin.  It is hardly the first time in the history of these Games 1 that something noteworthy happened.  For instance…

There was the first one, in 1991, in which the Caps trailed by a 2-1 margin going into the third period.  However, the Caps stormed back with three unanswered goals – Kevin Hatcher, Al Iafrate, and an empty netter by Kelly Miller – to escape with a 4-2 decision.  Happy times.  Except, it was the only win the Caps would record, the Penguins winning the series in five games and going on to win the Stanley Cup.

And there was 1992, when Peter Bondra scored the game’s first and last goals, and goalie Don Beaupre stopped 32 of 33 shots to power the Caps to a 3-1 win.  The Caps would take a 2-0 lead in winning Game 2 and a 3-1 lead after four games before dropping the last three by a combined 14-7 margin to lose in seven games.  The Pens went on to win another Stanley Cup.

The 1994 series was notable for what took place before Game 1.  The regular season ended for the clubs in very different fashion.  Pittsburgh wrapped up their season on April 11th, the Caps on April 14th.  With the series opening on April 17th, Pittsburgh had almost a full week to nurse injured players back to health, while the Caps had half as long.  Or at least this was the argument Caps General Manager David Poile made… loudly.  If it was mere gamesmanship, it worked.  The Caps won Game 1, 5-3, and then went on to win their only postseason series against the Penguins, four games to two.

In 1995, the Caps let the Penguins get out to a 3-1 lead, the last two of those goals scored 57 seconds apart in the first two minutes of the second period.  Things looked bleak.  The Caps crawled back on a goal by Sergei Gonchar and then tied it with a shorthanded goal by Steve Konowalchuk.  The Caps opened the third period by turning the tables on the Penguins, scoring goals 1:48 apart in the first three minutes to take a 5-3 lead.  Jaromir Jagr got the Penguins back within one late in the period, but the Penguins got no closer in a 5-4 Caps win.  After the Caps recorded back-to-back 6-2 wins in Games 3 and 4 to take another 3-1 lead, going to the second round seems a foregone conclusion.  The Caps might have thought so, too after taking a 2-0 lead in the first period of Game 5.  And then they went on a power play late in the period with a chance to drive a stake through the Penguins’ heart.  Think a series can’t turn on a single play?  You could argue that a whole career turned on a play with under three minutes in the first period of this game.  Jaromir Jagr beat Caps goalie Jim Carey for a shorthanded goal with 2:30 left in the first period to get the Penguins back to within a goal.  Starting with that goal, the Pens outscored the Caps in Games 5-7, 15-4, to take the series in seven games.  Carey would play in only five more postseason games for the Caps, losing all three of his decisions, and would be out of hockey by the end of the decade.

The 1996 series is notable for four things, two of which came in Game 1 and have been largely forgotten with time.  First, the Penguins stormed out to a 4-1 lead 31 minutes into the game.  The Caps came back, though, scoring five unanswered goals to close the scoring in a 6-4 win.  The second thing coming out of that game that might cause Caps fans to shake their collective heads in reflection was that the comeback was led by Todd Krygier, who had two goals in that game, including the game-winner 12:26 into the third period.  Krygier would figure prominently later in the series.

The head-shaking might stem from the fact that it was late in the second period in Game 4, just after the Penguins cut a 2-0 Caps lead in half on a Jagr shorthanded goal, that Krygier, the designated personal agitator of Mario Lemieux, caused Lemieux to “lose his noodle…”

For his trouble, Lemieux was charged with instigator, slashing, fighting, and game misconduct penalties, earning him an ejection.  Krygier got two minutes for roughing.  A reasonable person would think that with the best or second best player on the planet (depending on how one still felt about Wayne Gretzky) in the locker room for the last period, that the Caps would be in pretty good shape.  Yeah, that’s what the reasonable person would think.  Caps-Pens is not a realm for the reasonable, though.  Petr Nedved, who would loom oh-so-large later in this game, tied the game eight minutes into the third period to send the game into overtime.  And then another…and another…and…another.  Nedved ended the affair 19:15 into the fourth overtime with a power play goal for a 3-2 win to draw the Pens even at two games apiece.  They went on to win the series in six games.  Odd thing about that four-overtime Game 4.  All five goals were scored on special teams.  Two power play goals apiece and Jagr’s shorthanded goal.

Game 1 in 2000 was part of the league’s seemingly interminable policy to make the Penguins feel comfortable.  This year, it was back to scheduling.  Let Tony Kornheiser tell the story.  It mattered, perhaps for the only time in this postseason rivalry.  Capitals head coach Ron Wilson whistled a happy tune -- "I'll give Pittsburgh all seven games at their place and we'll still win” – but it would have been nice if the Caps won that Game 1 on home ice before heading to Pittsburgh.  The Penguins scored three goals in the first 12 minutes, added three in the second period, and won going away, 7-0.  The other four games were all one-goal affairs, but the Pens won three of them to win the series in five games.

Game 1 in 2001 was one of the strangest in this series.  It was the “Year of the Moose” in Pittsburgh, Johan “Moose” Hedberg capturing the herring scented hearts of Penguin fans after going 7-1-1 to close the regular season.  He got the call in Game 1 and showed no sign of playoff jitters.  The only blemish on his performance was a power play goal by Peter Bondra 35 seconds into the second period.  Fortunately for the Caps, Olaf Kolzig was even better.  Although he faced fewer shots than Hedberg (16 to 27), he stopped them all in a Caps 1-0 win.  Odd fact in this game… Mario Lemieux logged more than 24 minutes, most on the team, and did not have a shot on goal.  It didn’t matter in the end, though.  Pittsburgh won Game 6 in Pittsburgh in overtime, courtesy of rough ice that led to a Sergei Gonchar giveaway at his own blue line and a series-clinching breakaway goal by Martin Straka, his only goal of the series.

It would be eight more years before the rivalry was renewed, 2009 marking the first meeting of Alex Ovechkin and Sidney Crosby in the postseason. Four days after the Caps dispatched the New York Rangers in a seven-game thriller of a series, the Caps hosted the Pens in Game 1.  The stars did shine, Crosby opening the scoring four minutes into the game and Alex Ovechkin giving the Caps a lead before the first intermission on a power play.  But it would be lunch pail guys like Mark Eaton for the Pens and David Steckel for the Caps who would also figure in the scoring before Tomas Fleischmann won it for the Caps with a goal in the second minute of the third period in a 3-2 win.  The teams held serve with home wins in each of the first four games before home ice didn’t matter anymore.  The Caps won a game in Pittsburgh, but the Pens won both games in Washington, including an emphatic 6-2 win in Game 7 on their way to their third Stanley Cup in franchise history.

In 2016, Game 1 featured showing Caps fans what can happen when one player puts the team on his back, at least for one game.  And it was not Alex Ovechkin.  Andre Burakovsky got the Caps started with a goal mid-way through the first period, but the Penguins grabbed the lead with goals less than a minute apart mid-way through the second period.  Then, T.J. Oshie took over. He tied the game 12 minutes into the second period, and then he put the Caps in front in the fourth minute of the third period.  Nick Bonino tied it for the Pens mid-way through the period, but Oshie ended things 9:33 into overtime to complete his hat trick.  It was the first hat trick for a Capitals player in a playoff Game 1 since Dino Ciccarelli did it in New Jersey against the Devils in a 5-4 win in 1990.  Nice, to be sure.  That is, until the Pens won the series in six games on their way to another Stanley Cup.

Last year, something unusual happened to the Caps in Game 1 against the Penguins.  They lost. It was only the second time in ten Games 1 that it happened, the first time since 2000, breaking a three-game Game 1 winning streak against Pittsburgh.  In what would represent the underlying theme of this series (and the 2016 one, for that matter), it was that Bonino guy – the one who ended the Caps’ season in overtime in Game 6 to close out the 2016 meeting of these teams – who scored the game-winning goal in the 13th minute (13…bad luck) of the third period to push the Pens to a 3-2 win.  The Caps would lose Game 2 by a 6-2 margin, but they did fight back to win three of the next four games to force a Game 7.  But, these things, whatever path they take, almost always led to the same place…Pittsburgh winning the last game, a 2-0 win in Game 7 on their way to their fifth Stanley Cup.

With Evgeni Malkin and Carl Hagelin out for Game 1 in the opening game of this year’s series, the question is raised, “is Game 1 a must win game for the Capitals?”  We think it is the wrong question considering the arc of this series.  The question we would ask is, does it matter?  Bill Murray has the answer…