Countdown to Opening Night by the Elements: Number 35

We continue our look at the elemental aspects of Washington Capitals hockey with, well, Fearless’ walk through the periodic table in the countdown to opening night. 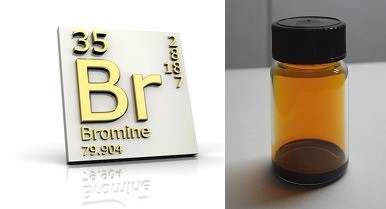 Here is what you need to know about bromine.  Its name derives from the Greek word, “bromos,” meaning “stench.”  It is not so much a stench that characterizes it as it is a foul smell that resembles that of chlorine, which, like bromine, is a member of the group of elements referred to as “halogens.”

At room temperature, bromine is not solid, but rather takes the form of a reddish-brown liquid.  And, if exposed to air it evaporates easily to give off an orange vapor.  It is highly toxic and corrosive.

It was discovered independently by two chemists.  The first – Antoine Jerome Balard – discovered it in the ash of seaweed found along the southern coast of France (who takes long walks along the beach rooting around in seaweed?).  The second – Carl Jacob Löwig – isolated it from mineral water, subjecting it to a number of treatrments until he was left with a brown liquid (chemists are generally people who as kids did disgusting things with food).

Bromine has no recognizable essential biological functions in people – any mammals for that matter – although it can be found in some enzyme reactions among lower sea life.  It does have some industrial applications.  Or rather, it used to have applications.  For example, it once served as a gasoline additive.  There, its purpose was in binding to lead to prevent engine knocking.  Of course, now that gasoline is unleaded, and environmental regulations have been established to reduce lead emissions, you don’t find this application much these days.  It used to be used in pesticides, but since 2005…not so much.   It used to be used in sedatives back in the 19th century, but today?... mmm, no.

It does have some uses.  It is found in some vegetable oils that are then used in the manufacture of some soft drinks (those containing citrus, for example).  It is found in a number of dyes; it is used in swimming pool cleaning.

So here we have a reddish-brown, toxic, corrosive, disgusting looking liquid discovered in seaweed.  It has no biological functions in people, and while it used to have some uses, these days it does not have as many and even those are kind of uncommon.  It gives off an orange color (sort of like a traffic cone) as it evaporates into air.  Some folks would find its smell off-putting.  Frankly, we think bromine gets a bad rap, but there is is…

Bromine, the “Jeff Schultz” of the periodic table.

..yeah, we know, former Cap, but what, you thought we were going to give this to a current Capital?

Posted by The Peerless at 12:53 AM No comments: