You Can't Make This Up

OK, so we know Brent Johnson is nursing a hip injury that was aggravated in the Boston game. But now, as Tarik El-Bashir reports, Jose Theodore has a hip flexor issue, too.
So...
Meet your new (if temporary) backup goalie...
I hope they make a movie of this...

Posted by The Peerless at 5:20 PM No comments:

Some Locker Room Bulletin Board Stuff for the Next Carolina Game?

Q: Who is the best player in the game today?

A: Right now I would say [Evgeni] Malkin. I think he's playing the game with so much confidence. He's making plays that not a lot of guys can make. They have a great 1-2 combo with [Sidney] Crosby and Malkin. On the power play they're lethal, and I think overall Malkin is playing the best in the league right now.

So said Eric Staal (he of the Southeast Division opponent Carolina Hurricanes), in an interview with ESPN. Although to be fair, it seems to us the difference between the player who is playing the best right now (Malkin) and the best player (and Malkin might not be the best player on his own team, let alone the league).

A tip of the hat to The Sweater Ted for the link.

Posted by The Peerless at 12:35 PM No comments:

...must come to an end.
If you had Josh Tordjman pitching a shutout to end the Hershey Bears' franchise-best 11 game winning streak, you win the prize.
The undrafted Montreal native stopped all 41 shots he faced last night as the San Antonio Rampage defeated the Bears, 3-0, at AT&T Center in San Antonio.
It was the first time the Bears have tasted defeat since losing at Bridgeport, 4-1, on November 9th. It was the first time the Bears were shut out since Marc Denis turned the trick in a 6-0 Hamilton win on October 29th. Clearly, their top-two goal scorers -- Alexandre Giroux and Oskar Osala, who are with the Capitals -- were missed.
Still, Hershey's 20-6-1 record is the best in the AHL, their 41 standings points being four points better than their East Division rival Bridgeport Sound Tigers. Their 114 goals scored (4.22/game) is a whopping 18 better than next best Hamilton (3.69). Only one team in the Eastern Conference (Manchester) has allowed fewer goals than the 69 allowed by the Bears.
Posted by The Peerless at 6:03 AM No comments:

The Peerless Prognosticator is ON THE AIR!!! -- Caps vs. Ottawa, December 12th

It’s Friday Night on Fun Street… Singles Night… Toys for Tots Night… and the Ottawa Senators are visiting. What’s not to love? Well, the Senators, if you’re an Ottawa fan. The Senators come into this one having struggled all year. They’re 10-11-5 overall – last in the Northeast. The picture hasn’t been pretty… 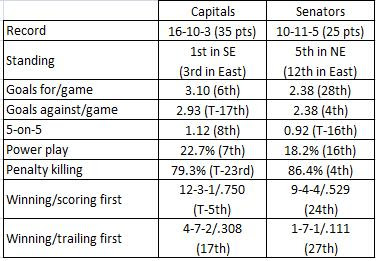 It puts us in mind of a song…

“O” is for the offense of their first line…

Dany Heatley, Daniel Alfredsson, and Jason Spezza rank 1-2-3 on the club in goals scored, having accounted for 33 of Ottawa’s 62 goals scored this year. That is a pace for about 104 goals. Last year, they totaled 115, but the trio also missed a combined 29 games. Right now, they are the top line, but not necessarily a “top” line…at least not to the degree to which we’ve become accustomed over the last several years.

“T” is for the third line that can’t score.

Frankly, no one outside of the top line can score. 29 goals are spread over 22 other skaters not on that top line who have dressed for the Senators this year. None of that group has more than four, and the pair that has that total – Nick Foligno and Shean Donovan – are not generally on the tip of the tongue when reciting top goal scorers.

“T” is for the trying times this year.

Ottawa has not won more than two games in succession this year. On the other side, they have streaks of 0-4-0 and 0-4-2. Their record of 3-2-1 over their last dozen ranks with their most sustained run of success this year over any similar stretch of games. For a club with a reputation for offense in this decade, they clearly struggle, especially on the road. They have the second fewest goals scored on the road this year (11) and the worst goals-per-game average (1.82). And while they do not have an awful road power play (they rank 20th at 15.9%), they don’t get many opportunities – 26th in total road power play opportunities (in 11 games).

“A” is for the absence of an offense

Only five times in 26 games have the Senators scored more than three goals. Seven times, they have scored one or none. They are 6-for-51 in on the power play in their last dozen games (11.8 percent).

“W” is for the wins rare on the road

Ottawa is 3-6-2 on the road. They are 0-5-2 in their last seven road contests, scoring a total of eight goals in the process (and suffering two shutouts).

“A” is for Antoine Vermette, where’s he?

What happened to this guy? After three years since the lockout that saw his point total increase from 33 to 29 to 53 last year, he was signed to a two-year contract to re-up with the Senators. And he’s fallen with a thud – 2-3-5, -8 in 26 games. He’s on a pace to finish with barely half as many points (15) as he had goals last year (24). He hasn’t had a goal since November 1st and has only one point since then in 15 games (going minus-7 in the process).

Put them all together they spell “Ottawa”…a team that’s just a myst’ry to me.

That would be an understatement. The Senators have to be on a short list for most disappointing team in the first third of the season.

Strange though it might be, the Senators are what they are, and that is an offense-challenged team, especially once one gets past that first line. That puts more emphasis on defense and goaltending, where in fact Ottawa has had some fine results. Alex Auld is said to be the likely nominee to defend the Ottawa goal tonight, and he’s had a nice run of success. Auld has lost only one game in regulation in his last eight appearances (4-1-3, 1.80, .925). He is 3-2-1, 2.27, .924 in seven career appearances against Washington.

Last year, Ovechkin was 6-4-10, +5 in four games against Ottawa, and he has ten goals in 13 career games against the Senators. He’s sputtered a bit on the last half dozen games, goal-scoring wise (two goals, despite 47 shots on goal) after recording five goals in three games over the Thanksgiving holiday week. He might also have an opportunity to respond to the two players immediately ahead of him in the scoring rnakings – Sidney Crosby had three assists, and Evgeni Malkin had a goal and an assist in a 9-2 win over the Islanders last night.

Ottawa might have their offensive problems, but their reputation suggests that one should not take them lightly in that regard. Brent Johnson’s hip makes for some mystery as to who will start in goal for the Caps tonight, and that means something – Johnson is 4-1-1, 1.89, .944 with a shutout in seven career appearances versus Ottawa, while Jose Theodore has struggled (7-12-2-1, 3.20, .898 in 23 career appearances). Still, Washington come in getting healthier, the Senators come in frustrated.