The Peerless Prognosticator is ON THE AIR!!! -- Game 41: Hurricanes at Capitals, January 2nd

Yeah, yeah, back to hockey.  You will have to pardon us, as we were making rather merry last night as our alma mater turned red roses green in the Rose Bowl.

But tonight the Washington Capitals hope to make the Carolina Hurricanes see red at Verizon Center in the first contest of the new year.

These are two teams happy to see the calendar flip over to a new year.  Washington ended 2013 with a 3-3-3 record in their last nine games, 1-2-2 in their last five.  Meanwhile, Carolina ended 2013 even worse – 2-4-4 in their last ten games, 1-3-2 in their last six contests, and they had to score four goals in the third period against Montreal to force an overtime to get their lone win in those last six games. 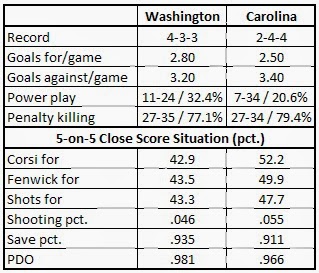 These are two teams not playing especially well.  They give up too many goals, especially on the opponents’ power play.  Their 5-on-5 close score situation metrics are poor; their respective PDO values (sum of shooting and save percentages) are equally meager.  So, what should we pay attention to with these teams?

1.  Starting with a three-point effort against the Caps in a 4-1 win back on December 3rd, Jeff Skinner is 12-4-16 in his last 13 games.  Rather Ovechkinesque numbers in their goals scored and balance.  He has 57 shots on goal in those 13 games, too.  Not quite Ovechkin-level, but at 4.4 shots per game over that stretch he is not shy about letting fly.

2.. Skinner’s production has been mirrored by that of Eric Staal.  Over those same 13 games Staal is 2-10-12.  However, he is a minus-7 over his last four games.  Things will happen with Staal on the ice.

4.  Will Justin Faulk suffer a hangover after being selected to the U.S. Olympic team?  His numbers lately have not been impressive, scoring-wise, anyway.  Since a three-point effort against Nashville on December 5th, he is 1-1-2, minus-3, in 11 games.  He has not been shy about pulling the trigger.  He has 20 shots on goal in his last six games from the blue line with one goal to show for it.

1.  On the other side of the Olympic hangover issue is John Carlson.  He has struggled some with offense lately, going 1-2-3, minus-3, over his last 15 games.

2.  Marcus Johansson is in another of his periodic scoring funks.  He had a five-game points steak from December 10-20 (2-4-6).  However, he is taking a five-game streak without a point into this contest.  What’s more, he is light on his shots on goal, especially for a top-line winger, only five over those five games.

3.  Back in late October, Jason Chimera embarked on a four-game goal scoring streak, and it looked as if he might challenge that 20-goal season he had in 20-11-2012.  However, since he potted one in the Caps’ 7-0 win in Philadelphia on November 1st, he has two goals in his last 27 games.

4.  Mikhail Grabovski has settled into a rhythm.  He has not had consecutive games without a point since November 23-27, covering 13 games over which he is 4-7-11.

So what’s it going to be?  A run-and-gun, shootout kind of game? No, not that kind of shootout, more like the one at the end of Butch Cassidy and the Sundance Kid.  It certainly could be.  Neither team is playing good defense, neither team is getting good possession numbers, neither team is getting good goaltending (or at least consistently good goaltending from those who are supposed to be providing it), and their penalty killing is undistinguished.  It might be entertaining, if not quite an aesthetic marvel for those who appreciate such things. Still…