Washington Capitals: That Was The Week That Was -- Week 22

After a detour into winless territory in Week 21, the Washington Capitals returned to winning ways in Week 22.  They took advantage of struggling teams and might have had a perfect week but for a something less than perfect third period against the Minnesota Wild. 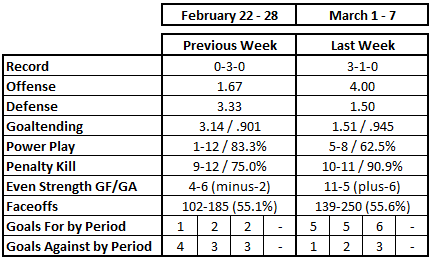 The Caps have been alternating dominating and losing weeks lately.  In Week 18 they were 3-1-0.  They followed that up with a 1-2-0 record in Week 19, 4-0-0 in Week 20, and 0-3-0 in Week 21.  It continued in Week 22, the Caps finishing a four-game week going 3-1-0.  The three wins allowed the Caps to inch just a bit closer to the Metropolitan Division leading New York Islanders, closing the gap from eight points at the beginning of the week to six.  They halved their deficit with the New York Rangers for second place, from six points to three, an important consideration since the Rangers hold four games in hand over the Caps at the end of Week 22 and face Washington in Week 23. 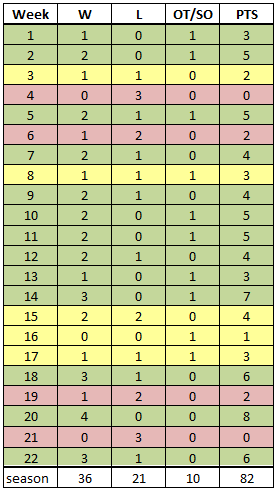 The scorers scored (Alex Ovechkin had five goals), the playmakers made plays (Nicklas Backstrom had five assists), the new guys contributed (Curtis Glencross had four points, Tim Gleason had one), and the Caps got a healthy dose of contributions all around.  Eight players shared in the 16 goals for the week; 18 players recorded points.  It was a healthy week from a shooting percentage perspective, the Caps finishing Week 22 with 16 goals on 135 shots (including a pair of empty net goals).

It was not all unicorns and accordions, though.  The Caps took advantage of poor defensive teams, scoring four goals against the league’s 25th-ranked team in scoring defense (Toronto), five against the 26th-ranked team (Columbus), and six against the league’s worst team in scoring defense (Buffalo).  They managed just one goal against Minnesota, a team with a middle-of-the-road scoring defense (12th at week’s end) but one whose goaltender – Devan Dubnyk – was stopping pucks at an impressive rate (14-2-1, 1.52, .944, four shutouts in 17 games prior to his meeting the Caps).  The Caps solved Dubnyk just once on 25 shots.  Still, it was a good week on the offensive side of the puck.

Those first three games make a point.  Week 22 was in two distinct parts when it came to possession.  There were those first three games against Toronto, Columbus, and Minnesota; and there was the fourth game of the week, a 6-1 win over the Buffalo Sabres.  If one looked at the four games overall, the Caps had a pretty good week.  Their Corsi-for/Fenwick-for percentages at 5-on-5 were 53.5/55.6, and they were just about as good in close score situations: 54.2/56.1.  In those first three games, though, the numbers did not look quite as good, Corsi-for and Fenwick-for percentages of 47.7/50.5, respectively; and the close score values were similar: 48.2/51.4.

Then there was the last game of the week against the Buffalo Sabres.  By the time the 6-1 dismantling of the Sabres was complete, the Caps set a season high in total shot attempts (84) while limiting Buffalo to the fifth-fewest number of shot attempts allowed this season (43).  The Corsi plus-41 was a season high, as was the overall Corsi-for percentage (66.1).  It did not get better for the Sabres at 5-on-5, where the Caps enjoyed a Corsi plus-37 and a Corsi-for percentage of 67.6 (another season high).  It was hardly surprising that the Caps enjoyed a 45-17 shot advantage, the 17 shots allowed being a season low for the Caps, the first and only time this season Washington allowed fewer than 20 shots on goal.

Week 22 was another week in which Braden Holtby took all the available minutes in goal.  It was a lot more successful week than he had in Week 21.  He was solid in all three periods, even if he did suffer a slippage in save percentage over the course of the three periods for the week.  Holtby was 33-for-34 in the first periods of games for the week (.971), 33-for-35 in the second periods (.943), and 37-for-40 in the third periods (.925).

It was two goals on four shots over a 5:09 stretch of the third period that did him and the Caps in as Minnesota turned a 1-0 Caps lead into a 2-1 win over the Caps, only the second time this season that the Caps lost a game in regulation when scoring first and the second time that the Caps lost in regulation when taking a lead into the third period.  Overall, though, it was the kind of week that was just the thing to make it a 3-1-0 week for the Caps.

Week 22 might have been the best week of the season for the Capitals’ power play.  Not only was the 62.5 percent conversion rate the best for the season, the five goals (on only eight opportunities) was the second highest goal total of the season (the Caps had six goals on 17 chances in Week 20).  It was not as if it was entirely “The Alex Ovechkin Show,” either.  Ovechkin had two goals and an assist on the power play to lead the Caps in goals and points on the man advantage for the week, but three other Caps recorded power play goals (Curtis Glencross, Joel Ward, and Marcus Johansson), and 11 players (including Ovechkin) recorded points. The other side of the special teams had a fine week as well.  It was part of an odd alternating week-to week performance that saw the Caps finish Week 19 at 60.0 percent, then followed that up with a 100.0 percent week and a 75.0 percent week before going over 90 percent in Week 22.

Columbus was the only club to solve the Caps on the power play this week in what was an odd game.  Despite the teams committing a combined 21 penalties (including one that resulted in a penalty shot for the Blue Jackets), the teams combined for only four power plays, two for each and each team scoring once.  The Columbus power play goal by Scott Hartnell nine minutes into the third period marked the third time in the game that the Blue Jackets narrowed a two-goal Caps lead to a single goal, but it was as close as they got in a 5-3 Caps win.

It was an efficient penalty kill for the Caps, particularly in the second half of the week.  Overall the Caps held their four opponents to one goal on 13 shots in 20:03 of shorthanded ice time.  Against Minnesota and Buffalo, they shut both teams out on five power plays, holding each team to one power play shot in a total of 9:13 of ice time. 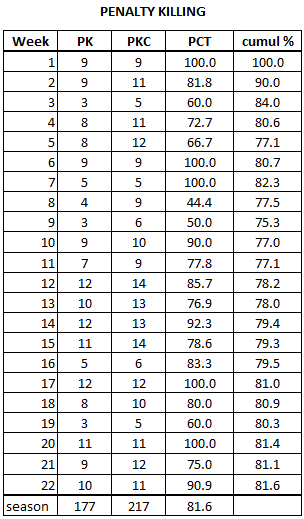 The Caps opened the week getting out to 2-0 leads against Toronto and Columbus, doing all their damage at even strength. It was precisely the sort of hole in which the Caps would like to place opponents, forcing them to take chances and opening up the ice for counterattacks.  On the other hand, the Caps’ inability to solve Minnesota goalie Devan Dubnyk at even strength (0-for-23 shooting) put them in a bind in trying to hold off the Wild in a game that the Caps lost in the third period.  It was a different sort of game altogether for the Caps against the Sabres to end the week.  Spotting the Sabres an early even strength goal, the Caps tied the game with an even strength strike just 2:40 after the Sabres’ goal, then took the lead they would not relinquish five minutes into the second period on a even strength goal.  Finishing the week scoring more than twice as many even strength goals as their opponents is probably not a sustainable outcome, but it is the kind one might expect when facing teams that struggle keeping the puck out of the net. 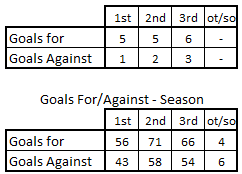 At this point in the season, it appears unlikely that the Caps will jump over three teams in the Metropolitan Division to take the division crown.  A six-point deficit with 15 games to play is too much, given as well as the other teams ahead of them are playing.  That argues for tending to one’s own business without undue attention being paid to the scoreboard, and the Caps did a fine job of that in Week 22.  Washington did a good job of dealing with Toronto, Columbus, and Buffalo – struggling teams all – in a business-like fashion.  Against Minnesota there might have been a fourth win had Marcus Johansson been a bit luckier shooting the puck (two times beating Devan Dubnyk only to hit iron). Taking the long view, the Caps are 26-11-6 since they were at 10-10-4 on December 2nd.  That is a 111-point pace over a full season.  They have had only two losing weeks (on a standings points basis) in their last 16 weeks, only four in 22 weeks this season.  The Capitals are the “tortoise” more than the “hare,” and heading into a post-season that could last four series and two months, that might be the better of the two to be.

Posted by The Peerless at 10:34 AM No comments: