The Peerless Prognosticator is ON THE AIR!!! -- Home Opener: Hurricanes at Capitals, October 5th

The Washington Capitals raise the curtain on the home portion of their 2019-2020 season on Saturday night when they host the Carolina Hurricanes at Capital One Arena.  The game will not have the hoopla that surrounded last year’s home opener, when the Caps raised their Stanley Cup championship banner to the rafters, but there is no small amount of drama attached to this game.  The Capitals saw their season end last spring on this ice sheet against this opponent when the Hurricanes scored in double-overtime of Game 7 to end the Caps’ reign as Stanley Cup champs.

Carolina has had a hard time of it since they won the Stanley Cup in 2005-2006.  Before last season, the Hurricanes qualified for the playoffs once in 12 seasons after their Cup run (2008-2009, losing in the conference final).  Their 46 wins last season were more than they had in any season since that Stanley Cup winning year (52).  Even with last year’s improvement, their 2005-2006 season remains the last time they won a division title (Southeast).

If there was a blemish in Aho’s 2018-2019 numbers, it was the disparity between home and road production.  He was 19-30-49, plus-21, in 41 home games; but he was a less productive 11-23-34, plus-4, in 41 road contests.  Part of the problem was that his road scoring dried up down the stretch.  After putting together a solid run of 5-12-17, plus-7, over a 13-game stretch on the road, Aho went without a point in his last six road contests and had a minus-3 rating.  A sign of how productive he has been in his early career, though, Aho almost certainly will finish this season among the top-20 point getters in team history (he needs 44 points to pass Dave Babych for 20th place), and with a big goal scoring year he could find himself in the top-15 in team history in goals (he needs 37 to pass Ray Whitney for 15th place, unless Jordan Staal gets there first with 23 goals).  Aho is 8-9-17, even, in 12 career games against the Caps.

Jaccob Slavin is another of the 25-and-under brigade, and he returns as the ice time leader among defensemen, averaging 23:02 while dressing for all 82 games last season.  He has come a long way from being a fourth round (120th overall) pick in the 2012 Entry Draft, the 41st of 77 defensemen taken in that draft.  As it is, he is tenth in his draft class in games played among defensemen (309), 12th in goals scored (23), eighth in assists (92), ninth in points (115), and ninth in plus-minus rating (plus-25).

He had a solid year last season, finishing third in goals scored among Hurricane defensemen (eight), second in assists (23) and third in points (31).  He was also fourth in hits (70), and first in both blocked shots (133) and takeaways (86) among defensemen.  And when he put up points, Carolina was successful.  The Hurricanes were 21-4-2 in the 27 games in which he recorded at least one point.  What was a negative indicator of success was when he was more physically engaged.  In the 19 games in which he was credited with two or more hits, Carolina was just 9-10-0.  In 15 career games against the Caps, Slavin is 0-2-2, minus-2.

For better or worse, Petr Mrazek is Carolina’ answer in goal.  After signing a one-year/$1.5 million deal in July 2018 with the Hurricanes, Mrazek gave the Hurricanes solid minutes in goal, when he was in goal.  His 2.39 goals against average was sixth in the league among 37 goalies with at least 2,000 minutes, and his save percentage of .914 was 14th.  To these he added four shutouts.  They were his best numbers since he was 2.33, .921, with four shutouts for the Detroit Red Wings in 2015-2016 in 49 games.

Those games are perhaps an issue.  Last season he started 40 games for Carolina, while Curtis McIlhinney started 33.  Mrazek has never started more the 49 games in a season in his seven years in the league.  Nevertheless, Carolina saw fit to re-sign him to a two-year/$6.25 million deal last July.  He will be backstopped by James Reimer, himself a veteran with considerable experience (338 games for three teams), but another goalie who has never carried a heavy workload (44 starts being his high in 2017-2018 with Florida). It would not be surprising to see the Hurricanes split time between these goalies in a similar fashion to last year’s split in games.  Mrazek is 3-5-2, 2.52, .917, with one shutout in ten career appearances against Washington. 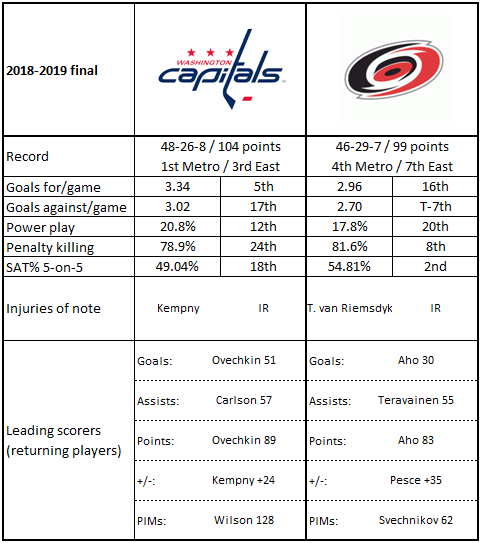 1.  The Carolina Hurricanes are quite different from their previous incarnation, the Hartford Whalers, in one respect.  There have been 39 franchises to skate in the NHL since Hartford came into the league in the 1979-1980 season, since then, the Whalers stand third among them in penalty minutes per game (20:52).  Since moving to Carolina, though, the Hurricanes rank 36th of those 29 teams with 10:54 in penalty minutes per game.

2.  Carolina had a talent for drawing penalties for man advantages last season.  They were tied for fifth in the league in power play opportunities on the road (128, with Florida).

4.  The Hurricanes had the worst shooting percentage in the Metropolitan Division last season (8.6) and sixth-worst in the league.

1.  The Caps are playing their home opener in Game 3 of the season, the latest they have had their home opener since they opened at home in Game 3 of the regular season schedule in 1999-2000. They tied the Los Angeles Kings, 2-2, in that one.  The last time the Caps started their home season later on the schedule was in Game 4 in 1994-1995 (under an abbreviated schedule due to a lockout), a 5-2 in over the New York Islanders.   The Caps have never started their home schedule later than Game 3 in a full-season’s regular season schedule.

2.  Alex Ovechkin is tied with Martin St. Louis for most career points against Carolina (91).  The odd part of it is that he has 40 goals in 77 career games against the franchise (most all-time against Carolina), but he also has 51 assists (third, trailing St. Louis (53) and Jaromir Jagr (54)).

4.  The Caps are only of only two teams in the league to have failed to record a penalty shot goal on home ice over the last eight seasons.  The New York Rangers are the other.  Among teams playing over all eight years (Vegas not included), only Anaheim had fewer penalty shot attempts on home ice (three) than the Caps (four).

Left-winger Brock McGinn was not among the top-ten point getters for Carolina last season, but he is yet another in the 25-and-under crowd sprinkled through the Hurricanes’ roster (he is 25).  His starring moment last season, however, came in the postseason.  He became only the second player in team history to score a game-winning goal in overtime of Game 7 of a playoff series.  That’s right, for Caps fans who don’t remember, he was the player redirecting a centering feed behind Braden Holtby to send the Caps home last spring and Carolina to the second round (Scott Walker was the other Hurricane to do it, in Game 7 of the 2009 Eastern Conference semi-finals against Boston).  The odd part of McGinn’s game-winning, series-clinching goal was that he was without a game-winning goal in 82 games of the regular season.

More generally, McGinn has established himself as a player who can provide reliable minutes in a support role.  He had something of an outlier in his first full season, scoring 16 goals in 80 games (0.20 per game), but otherwise averaged about 0.12 goals per game over his other three seasons, about nine goals per 82 games played.  He was more highly ranked among Carolina forwards last season in the “grittership” categories, finishing third among forwards in credited hits (137), third in blocked shots (38), fourth in takeaways (54), and doing it while averaging only 14 seconds of penalty time per game over 82 games.  McGinn is 1-0-1, minus-5, in 13 career games against the Capitals.

Carlson was among the top scoring defensemen in the league last season (fourth with 70 points), and he was not particular about where he did his scoring.  He a Morgan Rielly were the only defensemen in the league last season to finish top-five in points at home (Carlson was tied for fifth at 34 points) and on the road (Carlson was tied for second with Rielly at 36 points).  He recorded points against 26 of the other 30 teams in the league, drawing a blank only against Arizona (two games), Buffalo (three games), Dallas  (two games), and Minnesota (two games).

When Carlson took the ice in the season opener in St. Louis, he broke a tie with Rod Langway for second place in seasons played for the Capitals (now with 12). He trails only Calle Johansson (15 seasons with the Caps) on the all-time franchise list, and he is only the tenth skater in team history to skate 12 seasons for the Caps.  He will soon become the third defenseman in Caps history to play in 700 games for the club (Langway had 726; Johansson had 983).  What he will do on Saturday night in taking the ice is add to his career high in games played against an opponent when he faces Carolina for the 43rd time in his career.  Carlson is 7-21-28, plus-7 in 42 career games against the Hurricanes.

The Caps have dominated the Hurricanes in Washington recently, going 8-2-0 against them over the last five seasons at Capital One Arena, outscoring them, 34-17, and recording seven power play goals to two for Carolina.  But the last game is what sticks in one’s mind, a season-ending loss on this ice sheet.  There is enough history between these teams, having been division rivals going back to the Southeast Division days, to make this a hard-fought matchup.  That last game might be expected to give the Caps just a little more incentive to make Carolina’s night difficult in the home opener.