The Peerless Prognosticator is ON THE AIR!!! -- Caps vs. Maple Leafs, December 12th

On the road again… the Caps home stand was brief – one game – and now it’s back on the road to start a four game swing. Tonight, the Caps make another appearance on Hockey Night in Canada (part of a four-times-in-five-weeks stretch), visiting the Toronto Maple Leafs at Air Canada Centre. In doing so, the Caps will take the best record in the NHL into the game, having reached the 20-win mark faster (32 games) than they have in any season since 1991-1992 (28 games).

On this chilly weekend, we thought we’d dip into the mailbag to take the pulse of Capitals Nation. Let’s take a look…

How can the Caps possibly win the Stanley Cup this year? Their best players aren’t as good as the Blackhawks’ best players, Mike Green can’t play defense, Alex Ovechkin is a dirty player who is starting to break down, the coach wants to club Alexander Semin over the head sometimes… don’t they just, well, suck?

Signed,
The World of Hockey


You might want to go off somewhere, maybe say, Sweden, and think this one over.

What’s the difference between Jim Kelley and a horse’s ass?

Not a damned thing.

The Caps and the Leafs have met twice this year, splitting two decisions. The Caps won the first meeting in Washington’s home opener on October 3rd, 6-4. The Leafs won the rematch on ACC ice on November 21st in a Gimmick, 2-1.

Since that last meeting, Toronto has played ten games, going 6-3-1 in them. Their defense has been about as porous at it has been all year (they allowed 33 goals in those ten games). The overall numbers look like this… 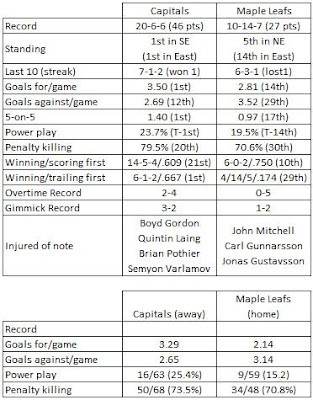 But what the Leafs seem to have found lately is another gear to their attack (34 goals scored, three times scoring at least five in a game). Which brings us to…

Niklas Hagman is 6-5-11 in the last ten games, virtually doubling his point total for the season (14-9-23 overall). It’s part of an 8-5-13 run he’s had over 13 games (points in ten of those games) that followed a five-game pointless streak. Perhaps oddly, given Hagman’s team leading number of goals in the last ten games, all of them have come at even strength – none on the power play (and we'll get to the power play later). Hagman is 3-3-6 in 24 career games against the Caps, including a goal in each game between the clubs this year.

Matt Stajan has found a goal-scoring touch in the last ten games as well, potting four (4-5-9), including the game winner against Tampa Bay on November 25th, to bring his season total to nine goals. Stajan has been looking for a breakout year since getting 14 goals as a rookie for the Leafs in 2003-2004. Perhaps this, finally, is his year. Of course, Caps fans said that every year about Dainius Zubrus, too. He hasn’t had much success against the Caps in his career. In 21 games he is 1-3-4.

Alexei Ponikarovsky, who has been something of a nuisance to the Caps in his career, also has nine points in the last ten games (3-6-9), but he’s gotten his in bunches. He has three multi-point games in this ten game stretch, accounting for all his points – a four point night (1-3-4) against Florida on November 27th, a two assist night against Columbus three games later, and a three-point night (2-1-3) against Atlanta last Monday. He is 8-4-12 in 20 career games against the Caps.

Vesa Toskala. The "vesa" (get it?..."vesa?"..."vessel?"... oh, forget it) into which Leafs Nation seems to have emptied its bile this year hasn’t had a particiularly efficent ten-game stretch, although he is over .500. He has five appearances in that span, going 2-1-0, 3.60, .877. In his two no-decisions, he was pulled once after allowing three goals on 15 shots in a 4-3 loss to the Islanders, and he got mop-up duty in relief of Joey MacDonald, allowing three goals on ten shots in a 7-2 loss to Boston. This year, he got a no-decision in the first meeting between the Caps and Leafs, allowing three goals on eight shots before getting pulled at the first intermission. In the rematch he was much better – 31 saves on 32 shots in the 2-1 Gimmick win. He is 3-4-0 against the Caps in eight games over his career.

1. Isn’t that special? Even in this ten game streak where the Leafs are 6-3-1, their special teams have been ghastly. The power play is 3-for-36 (8.3 percent), and the penalty killers are 20-for-32 (62.5 percent). At even strength the Leafs goals for/against ratio (1.48) is comparable to the Caps 5-on-5 ratio for the season (1.40). If the Caps can turn this into a special teams game, the Leafs could be in for a long night. Keep that in mind, and remember that in the last four games the Caps have played in, no more than eight power plays combined were skated in any of them.

2. Holster that weapon. The Leafs are second in the league in shots on goal. That is, in part, a result of their outshooting opponents 353-298 in the last ten games, including getting a whopping 61 shots on goal in a 4-3 overtime win over the Islanders on November 23rd. Only once in the last ten games have the Leafs been outshot by an opponent. They outshot the Caps (39-32) in the 2-1 win on the eve of this ten-game run.

3. A + A = W. Alex Ovechkin and Alexander Semin are a combined 22-13-35 in 27 career man-games against the Maple Leafs. This year they are a combined 4-3-7 in the three man-games they have (Semin missing the second meeting). Big night, big audience. Expect these two to come to play.

Like that last meeting between the teams, the Caps will be visiting Toronto in the back-half of a back-to-back set of games. And after that one, Alex Ovechkin remarked, “I think they had more gas,” referring to the Leafs. Compounding the problem is the trouble the Caps had getting out of town after last night's game. They bus to the airport, get on the plane, taxi onto the runway, then head back to the gate when the aircraft has mechanical problems, the reason being this… 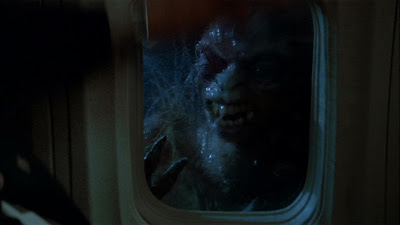 It isn’t a smooth weekend, and maybe that’s a good thing. The game could be the oasis of familiarity and routine the boys aren’t getting elsewhere this weekend. Yeah, that’s the ticket…