The Peerless Prognosticator is ON THE AIR!!! -- Game 19: Blues at Capitals, November 23rd

The Washington Capitals take the ice on Wednesday night in their annual Thanksgiving Eve game, this year hosting the St. Louis Blues at Verizon Center.  The Caps come into this game on a bumpy road, going 3-3-1 in their last seven games.  On the other hand, the Blues might be righting themselves after a rocky start.  After going 7-6-3 in their first 16 games, the Blues arrive at Verizon Center winners in three straight.

The wake-up call for the Blues might have been an 8-4 pasting they took at the hands of the Columbus Blue Jackets in Columbus on November 12th.  It was after that game that the Blues started their three-game winning streak. And, they have done it with defense and goaltending.   Jake Allen authored all three of the wins in goal for St. Louis, allowing just four goals on 86 shots overall (.953 save percentage).  His effort has allowed him to jump up to 17th among 39 goaltenders with at least 400 minutes played in goals against average (2.31) and 21st in save percentage (.910) after going 2.63/.896 in his first 12 appearances this season.  Allen assumed a larger work load in each of his first three seasons in the NHL, going from 15 appearances in 2012-2013 to 37 in 2014-2015 to 44 appearances last season.  It inspired enough confidence for the team to trade Brian Elliott – last season’s save percentage leader – to Calgary this past June.  Allen has one career appearance against the Caps, a 32-save shutout in a 4-0 win at Verizon Center last March 26th.

Vladimir Tarasenko has been a model of consistency in his offensive production for St. Louis in the first quarter of the season.  In 19 games, he has 19 points and has been held off the score sheet only six times in those 19 games.  He has points in seven of his last eight games, over which he is 3-7-10, plus-2.  If there is an odd fact about his season so far, it is that he had a hand in all four goals (goal, three assists) in the 8-4 loss to Columbus that shocked the Blues into their current three-game winning streak.  And, all four points came on power plays.  He is tied for fourth in the league in power play points (2-7-9).  Tarasenko is one of the most prolific goal scorers in the league.  Since becoming a full-time player in 2012-2013, he is tenth in the league in total goals scored (105).  In five career games against Washington, he is 3-1-4, plus-5. 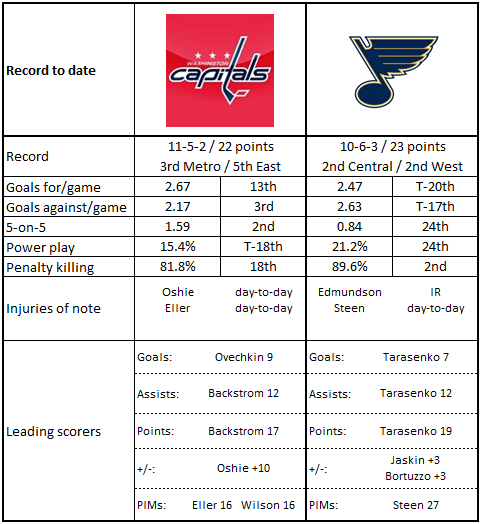 1.  Three is the key number for the Blues.  When they score three of more goals, they win.  This can be said generally for most NHL teams (NHL teams are 238-30-22 in such games though Monday’s contests), but the Blues are 8-1-0 in such games, the only loss being the 8-4 misfortune against Columbus.  They are 2-5-2 in games in which they score two or fewer goals.

2.  Only five teams have scored fewer 5-on-5 goals through Monday’s games than the Blues (27) – New Jersey Devils, Vancouver Canucks, Ottawa Senators, Colorado Avalanche, and Buffalo Sabres.  Only the Devils hold a playoff eligible spot among those teams, the second wild-card spot in the Eastern Conference.

3.  On the other hand, the Blues are one of just three teams with two 5-on-3 power play goals this season (Toronto Maple Leafs and Boston Bruins being the others).  They also have the fifth-most 5-on-6 goals (3).

4.  If you are going to get the Blues (or give the Blues the blues, or…never mind), it  will be in the second period.  With 23 goals allowed, only two teams have allowed more scores in the middle frame – Winnipeg Jets (28) and Dallas Stars (24).

5.  St. Louis is the top possession team in the league as measured by 5-on-5 Corsi-for (54.13 percent; numbers from Corsica.hockey).  They do it, as many Ken Hitchcock-coached teams do, by denying shot opportunities.  St. Louis’ shots attempts allowed per 60 minutes is the lowest in the league, the only team to allow fewer than 50 5-on-5 shot attempts per 60 minutes (48.48).

Defenseman Jay Bouwmeester played in his 1,000th NHL game against the New York Rangers at Madison Square Garden on November 1st, one of 17 active players hitting that milestone and one of 102 defensemen to reach the 1,000 game mark in NHL history.  He is among the most durable and consistent defensemen of this era.   In 12 full 82-game seasons prior to this one, Bouwmeester appeared in all of his team’s games nine times and hasn’t appeared in fewer than 72 games in a full season since his sophomore season in 2003-2004, when he appeared in 61 games.  While he has never quite lived up to the offensive promise his third-overall selection in the 2002 entry draft might have suggested, he has become a foundation player in his own end, and his consistency and durability have allowed clubs a certain comfort that he would be there on a night-t0-night basis, freeing them up to concentrate on other areas.  If there is a concern at this point in his career, it is in his offense, which has dropped significantly since his first full year in St. Louis (2013-2014: 4-33-37, plus-26). In his last three seasons, including this one, spanning 163 games through Monday, he is 6-29-35, minus-1.  Bouwmeester is 6-15-21, minus-4, in 46 career games against the Capitals.

After 18 games, Zach Sanford is the only forward appearing in more than one game this season not to record a goal.  When he does, it will be his first in the NHL.  Part of the situation is opportunity.  Skating just 10:24 per game in 16 games, he does not get a lot of minutes, and what he does get are generally fourth line minutes, almost all of them (all but 5:26 of 166:26 in total ice time) at even strength.  Those situations do not afford him much in the way of shooting opportunities, reflected in his recording 13 shots in 16 games.  He has shown a versatility so far, getting most of his minutes as a winger but filling in at center when Lars Eller went down to injury.  When he has had better linemates, he has not been a liability, at least in terms of possession.  For example, in 40-plus minutes skating with Eller and Justin Williams at 5-on-5, the line has a 56.34 Corsi-for at fives (numbers from Corsica. Hockey).  He shows signs of being the product of a fine program in college (Boston College), with the need to develop a stronger foundation of experience before Caps fans see what his potential really is.  This will be his first appearance against St. Louis.

The Caps are in a rut, treading water over their last seven games.  Except for their seven-goal explosion against Pittsburgh, they are having trouble scoring, three times in seven games scoring a single goal, twice scoring only two goals in regulation, and getting shut out once.  That they recorded standings points in three of those six games (a regulation win, an overtime win, and an overtime loss) is a reflection of just how well their goaltenders are playing and how well the Caps are tending to business in their own end.  But that kind of play places a strain on goalies and defenders, and provides a slim margin for success.   St. Louis, even if they are coming to Washington to play the back half of a back-to-back set of games (they will be in Boston to face the Bruins on Tuesday night), will provide quite a challenge to reversing that trend.