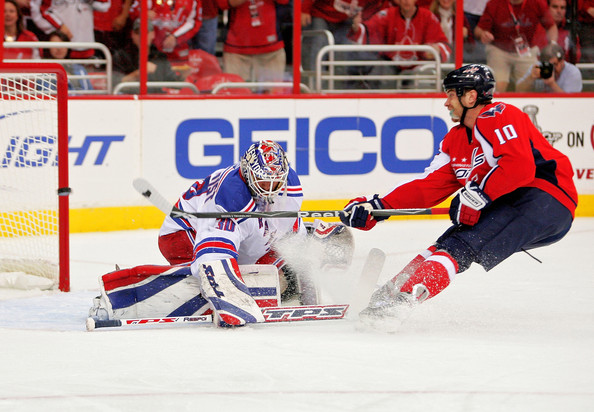 We are back with another in the occasional series this summer of “What If This Day In Caps History Didn't Happen Like This Day In Caps History?”  And that brings us to August 18, 2005.  The summer preceding the 2005-2006 season was a busy one for the Caps, made more so because the club was in the midst of a rebuild, bid farewell to a number of players before the 2004-2005 lockout, and had to cobble together a full roster with so many youngsters still in development.

In the space of eight days in early-August, the Caps traded for Chris Clark, signed free agents Andrew Cassels and Lawrence Nycholat, dipped into the free agent bag again to sign Mathieu Biron and Ivan Majesky, obtained Bryan Muir from the Los Angeles Kings for future considerations, and then signed Jamie Heward and Boyd Kane.  It was a busy eight days.

The Caps could be forgiven for going quiet on the personnel front for six days, but on August 18th, they added veteran forward Matt Bradley.  It was just another signing, or so it seemed at the time, among a blizzard of them for the Caps, the sort that gets perfunctory attention in the media.

Bradley made his Capitals debut on the same night as prized rookie Alex Ovechkin, although he did not have quite the introduction to Capitals hockey that Ovechkin had (two goals in his NHL debut).  Bradley skated a team-low 8:51 that night against the Columbus Blue Jackets, going without a point, but recording three hits to give a glimpse of the sort of “energy” player he would become with the club.

Bradley, who was not a prolific scorer in 203 regular season games over four seasons before arriving in Washingon (19-26-45), was a meat-and-potatoes sort of grinder who would do the dirty work in the corners and in front of the net, get under the skin of opponents, and stand up for teammates when the need arose.  In those first 203 regular season games before joining the Caps he had 24 fights, including a career high 11 with the Pittsburgh Penguins in 2003-2004, his last season before coming to D.C.

It was one element of a playing style that endeared Bradley to Caps fans through some hard times in those early years after the lockout.  It was a respect earned through episodes such as this one…

At about the 1:25 mark of the clip, you can see Bradley, who just hopped off the bench, make a bee-line to Steve Downie to keep him from renewing his antics with Alex Ovechkin from earlier in the contest.  Bradley was hardly shy about sticking his nose into such situations.  But those situations, as frequently as they might have occurred for which Bradley sacrificed his body, might not be the moment that Caps fans remember.

In fact, Bradley’s most memorable moment as a Capital might be less a vivid memory and more an “oh, yeah…” moment, at least his role in it.  It happened late in Game 7 of the 2009 Eastern Conference Quarterfinals against the New York Rangers.  It had been a 1-1 contest since late in the first period, and neither team seemed to have the key to unlock the back of the net to break the tie, until…

Everyone remembers Sergei Fedorov’s wrister that beat Henrik Lundqvist to give the Caps a 2-1 lead and, ultimately, a victory in the series.  But back up the clip to the 10-second mark, when Matt Bradley takes a hit at the boards to make a play, a backhand pass to Fedorov exiting the defensive zone to start the rush that ended in the series-winning goal.  What makes the moment even more bizarre, and what might be the ultimate anonymous hockey grinder moment, Bradley did not even get a “plus” on the goal.  Immediately after making the pass, he went to the bench in favor of Viktor Kozlov, who took the ice and would get the “plus” in Bradley’s absence.

And even that moment might never have happened but for some Bradley magic in Game 5 of that series.  Going into that contest, the Rangers had three one-goal wins in skating out to a 3-1 lead in games, and the Caps were facing elimination in Game 5.  However, just 4:58 into a scoreless game, with the Rangers on a power play and threatening to take a lead to add even more pressure on the Caps, Bradley got the Caps on the board with a shorthanded goal (25 seconds into this clip) to spark the Caps to a 4-0 win and keep themselves alive…

Bradley played two more seasons with the Caps, never flinching from his role as a stand-up, high energy player, but one who could chip in with a timely goal.  The physical edge with which he played took a toll, though.  After appearing in 81 games in 2008-2009, he played in 77 games in 2009-2010 and 61 games in 2010-2011.  After that 2010-2011 season, he signed a two-year contract with the Florida Panthers as a free agent.  In February of his first (and what would be only) year with the Panthers, he suffered a concussion that limited him to 45 games in what would be his last season in the NHL.

Some free agent signings are accompanied by a lot of hoopla, and others are merely one-line of type buried deep in the sports pages.  Matt Bradley’s signing with the Caps on August 18, 2005 probably qualifies as the latter, but he gave the Caps their money’s worth and played a lot noisier than “just another signing” might be expected to perform.  And absent that signing, the Caps might have been denied not only one of the most memorable goals in the history of the franchise, but might very well have been eliminated long before such a chance would ever present itself.  Even for grinders, there is a special place in hockey, and Matt Bradley occupies his in Caps history.