The Peerless Prognosticator is ON THE AIR!!! -- Game 8: Maple Leafs at Capitals, October 16th

The Washington Capitals try once more to earn their first home win of the season on Wednesday night when they host the Toronto Maple Leafs at Capital One Arena.  Toronto will come to Washington looking to shake off a shaky start of their own, going 3-2-1 as they go into a Tuesday night matchup with the Minnesota Wild before heading to DC.

Fulfilling expectations early, the Maple Leafs have not had much of a problem putting the puck in the net.  Their 4.00 goals per game is tied for fourth in the league in scoring offense.  They have already recorded five goals in three games, tied for the league lead through Monday’s games.

Auston Matthews has six of those goals, one-fourth of the club’s total to date.  Matthews is hardly a stranger to fast starts.  Remember than in his rookie season he scored four goals in his first NHL game (that the Leafs lost that game in overtime to the Ottawa Senators is less remembered).  He had 12 goals in his first 17 games in his sophomore season, and last season he was burning out red lights with 10 goals in his first six games.  Matthews has been a streaky sort over his three-plus year career.  The 22 multi-goal games he has posted in his career to date ranks second to Alex Ovechkin over the same span (25).  He already has two multi-goal games this season and has goals in four of the six games in which he played.  And, in what might be a bit odd for a player in a position usually thought of more as a playmaking role, Matthews ranks third in the league (and first among centers) in shots on goal through Monday (29, trailing Ovechkin (30) and Kyle Connor (31)).  Matthews is 3-5-8, plus-2, in eight career games against the Capitals.

Morgan Reilly has emerged as one of the leading offensive defensemen in the league.  Through Monday’s games, only two defensemen in the league posted more points than Rielly (129) – Brent Burns (155) and John Carlson (149).  Last season, Rielly was the only defenseman to post at least 20 goals (20) and at least 70 Points (72).  Now in his seventh season in the NHL, all with Toronto, Rielly has been a solid offensive contributor from the blue line since his rookie season.  He has never finished a season with fewer than 25 points, and three times he finished with more than 35, including each of the last two seasons.  His production has seen a march up the franchise rankings among defensemen, too.  Rielly is currently tied for 14th place on the all-time list of Maple Leaf defensemen in goals (51), 10th in assists (197), ninth in points (248), and 16th in games played (476).  He started this season with five points (all assists) in his first three games, but he is without a point in three games through Monday.  Rielly is 1-10-11, minus-2, in 18 career games against Washington.

Frederik Andersen is not asked to be the broad shoulders on which the Maple Leaf fortunes rest on most nights.  If he avoids allowing the bad goal and plays solidly otherwise, the Leafs have enough offense to be successful more often than not.  However, Andersen has been an uncommonly consistent goalie.  Starting in 2015-2016, his last year with the Anaheim Ducks before arriving in Toronto, Andersen has season save percentages of .919, .918, .918, and .917 last season.  In three seasons with Anaheim, his overall save percentage was .917; it is .918 in four seasons with Toronto.  Andersen’s numbers so far look worse than they probably are, owing to a small population of games played.  He has allowed three or fewer goals in four of the five games in which he played, with a .920 save percentage in those games.  But nestled in there was a horror show against Tampa Bay in which he allowed seven goals on 28 shots in 46 minutes in a 7-3 loss, dropping his overall save percentage through Monday to .886.  Andersen is 5-2-1, 2.82, .913, with two shutouts in eight career appearances against the Caps. 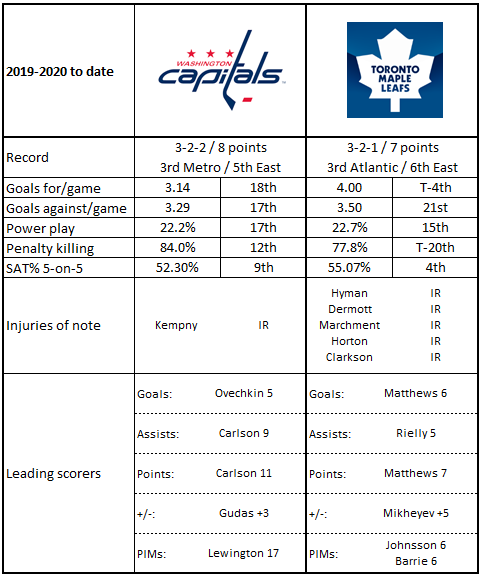 2.  The Maple Leafs have trailed after the second intermission only once so far this season, as have the Caps.  Toronto and Washington both lost in regulation in those instances.

3.  Toronto has lost both one-goal decision they played so far, a Gimmick loss to Montreal and a regulation loss to St. Louis, both at home.  Three of their other four decisions through Monday were decided by three or more goals.

5.  The Maple Leafs have the second-best shot attempts differential at 5-on-5 in the league (plus-49, to Florida’s plus-50).

2.  The Caps and the St. Louis Blues are the only teams (through Monday) to have allowed multiple overtime goals, each with two.

3.  The Caps already have 11 players with at least one power play point this season.  They had only 13 all of last season.

5.  Alex Ovechkin has 16 missed shots through seven games.  There are 569 skaters in the NHL to have dressed without recording that many shots on goal through Monday.

Morgan Rielly piles up the points.  Codi Ceci and Tyson Barrie are the new guys with the new guy buzz.  Jake Muzzin is new guy one year removed.  But who is the fifth defenseman to play in every game for the Leafs so far, Rasmus Sandin.  He sounds like a cross between the Buffalo Sabres’ number one overall draft pick last year (Rasmus Dahlin) and one of the all-time greats for the Leafs, Mats Sundin.  Sandin was the 29th overall pick of the 2018 Entry Draft by the Leafs who played last season with the Toronto Marlies affiliate in the AHL.  Sandin was the 13th defenseman taken in the 2018 draft, but he is one of only six defensemen taken in that draft to have dressed for an NHL game.  He recorded a point in his first NHL contest, an assist in a 5-3 win over the Ottawa Senators on Opening Night.  He went four games without a point before recording an assist in Toronto’s 5-2 win over the Detroit Red Wings on Saturday.  So far, he has been on ice for only two goals against, fewest among the five defensemen to dress for all six games through Monday.  You will not get to see him, though.  The Leafs sent Sandin to the Marlies on Monday, a classic case of considering whether limited ice time in the NHL or a bigger role in the AHL is best for a young player.

In our previous prognosto, we pondered a struggling Capital, Richard Panik.  Well, here is another one.  Carl Hagelin is looking for his first point of the new season.  If you go back to last season, including regular and postseason games, he has one point (an assist in Game 7 of the first round of the playoffs) in his last 15 games.  He does not have a goal in that span, despite having recorded 29 shots on goal.  Hagelin has never been a particularly efficient shooter; he has a 7.9 shooting percentage over 553 games of a nine-year career.  However, with age that percentage has dropped.  In 207 games over the last four season, his shooting percentage is 5.1 on 409 shots on goal.  The odd part of his game to date is that the lack of personal scoring has not been accompanied by a poor plus-minus rating.  Hagelin was even in each of his first six games before going minus-1 against Colorado on Monday.  Hagelin is 4-6-10, minus-4, in 29 career games against Toronto.

This week the Caps entered a part of their schedule in which they were facing up-tempo, offense-oriented teams.  It did not go well against the Colorado Avalanche, allowing three goals on the Avs’ first three shots of the game and allowing four first period goals before dropping a 6-3 decision.  Toronto poses some of the same problems – speed, skill, depth among the forwards, a pressure attitude.  The Caps did seem to take a firmer grasp of things later in the game against Colorado when they started throwing their weight around.  It is something that the Caps have been able to do against Toronto with some success, holding the Leafs to two or fewer goals in five of their last seven meetings.  It will be a contest of wills and styles when these teams meet on Wednesday.  If the Caps can remember the lessons of the last 40 minutes against Colorado, things should work out well.