The Peerless Prognosticator is ON THE AIR!!! -- Game 15: Capitals at Flyers, November 12th

After three contests against Atlantic Division clubs, the Washington Capitals return to intradivisional battle on Thursday night with a contest against a fellow Metropolitan Division foe.  The Caps are set to visit the Philadelphia Flyers at Core States First Union Wachovia Wells Fargo Center in Philadelphia.

Both teams are coming off shutouts in their last outings, and not the good kind.  Washington was shutout by the Detroit Red Wings on Tuesday night, 1-0, the second time they have been blanked this season.  The first was back on October 13th in Game 2 of the season, a 5-0 loss to the San Jose Sharks.  It might be worth noting that after that result, the Caps peeled off a five-game winning streak, their longest of the season to date.

Meanwhile, the Flyers are coming off consecutive decisions in which a shutout was recorded, a 3-0 win at Winnipeg against the Jets last Saturday and a 4-0 loss to the Colorado Avalanche at home on Tuesday.  That win against the Jets is the lone win for the Flyers in their last eight contests (1-5-2).

The Flyers’ offense has been all but non-existent in their eight-game slide.  The have 12 goals in those eight contests, a drought that has dropped them to 29th in scoring offense in the league (1.80 goals per game).  Of those 12 goals, Claude Giroux has a hand in five of them (1-4-5).  Giroux is the team leader in points so far this season with nine (4-5-9).  That makes the Flyers one of two teams in the league whose team leader in points has not yet cracked the double-digit level (Anaheim is the other).  Giroux has been one of the few consistent weapons in the Philadelphia arsenal this season.  Only once has he gone consecutive games without a point (October 29-30), and he has four points in his last five contests.  Giroux is 14-13-27, plus-2, in 25 career games against the Capitals.

Brayden Schenn is the club’s leading goal scorer (5) and the leading goal scorer over the Flyers’ recent eight-game downturn (3-1-4).  Perhaps no one on the club reflects the difficulties the club has had in recent games.  During a 2-1 overtime loss to the Calgary Flames a week ago, Schenn took one in the teeth – literally – for the team…

One of the problems the Flyers have had scoring goals is getting little contribution from the defense.  The seven defensemen for the club to have dressed this season have a total of four goals, three of them by Mark Streit.  The ten-year veteran has built a reputation of being something of a special teams specialist.  More than half of his career goals (45 of 87) have been scored on the power play, and almost half of his career points have been recorded on the man advantage (189 of 392).  He has been a bit streaky, recording only one point in his first five games of the season and only one point in his last five games.  In between he was 2-4-6 in five games.  In 34 career games against Washington, Streit is 8-17-25, minus-1. 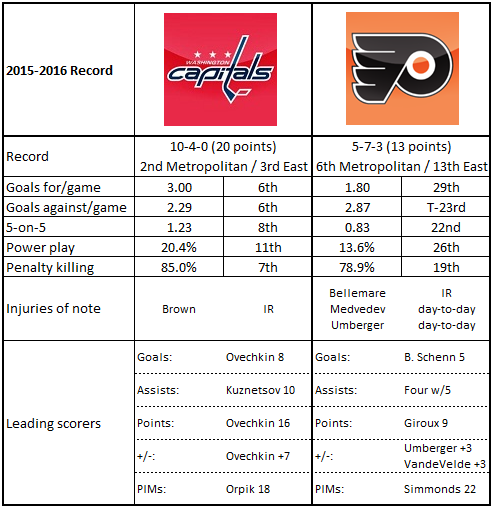 1.  The Flyer defense might not score a lot, but they do pile up the penalty minutes.  Through 15 games, Flyer blueliners have a total of 57 minutes in penalties (compare that to 34 in 14 games for Capital defensemen).

2.  Michal Neuvirth has gotten the call in four straight games in goal, filling in for number one netminder Steve Mason, who has missed time with a family matter and illness.  Neuvirth has had an odd go of it this season.  He has three wins, all shutouts.  In six other appearances he is 0-3-1, 3.28, .910.  It has been quite an all-or-nothing proposition with Neuvirth so far this season.

3. As one might expect from a team with as weak an offense as the Flyers, their shooting effectiveness is anything but effective.  They rank 29th in shooting percentage (5.9 percent).  Only Anaheim is worse (5.6 percent).

5.  Not that they have been good in their possession numbers, but the Flyers have not been as awful as their offensive performance numbers would suggest.  They rank 20th in Corsi-for percentage at 5-on-5 (48.6) and 21st in close score situations (48.8; numbers from war-on-ice.com).

1.  Here is your odd Alex Ovechkin stat for the game.  He had 15 shots on goal in the 1-0 loss to the Detroit Red Wings on Tuesday.  It was the eighth time in 13 games this season he recorded five or more shots.  The Caps are 5-3-0 in those games.  In the five games in which he recorded fewer than five shots, the Caps are 5-0-0.

2.  Washington has the second best shot differential, for and against, in the league (plus-5.4 per game).  Only Carolina is better (plus-5.5).

4.  Only two teams have more wins by three or more goals than the Capitals (5).  The New York Rangers and Montreal Canadiens each have seven such wins.

5.  Odd team possession stat.  The Caps have had offensive zone starts at 5-on-5 of 50 percent or better in 10 of their 14 games so far.  In the four in which they did not, they won three times (against Boston, Edmonton, and Chicago), their only loss being the 1-0 loss to Detroit on Tuesday (numbers from war-on-ice.com).

Steve Mason has not won a game in regulation time this season in goal for the Flyers.  In eight appearances so far he has two wins, one coming in overtime against Boston on October 21st, the other coming in a Gimmick on October 24th.  Of 45 goalies having appeared in five or more games through Tuesday’s games, Mason is 42nd in goals against average (3.34) and 35th in save percentage (.902).  He has not appeared in a game since dropping a 4-1 decision to the Vancouver Canucks on November 2nd.  With Michal Neuvirth having sustained an injury in the third period of the Flyers’ 4-0 loss to Colorado on Tuesday, Mason is expected to get the start against the Caps.  In 13 career appearances against Washington, he is 7-3-2, 2.65, .910, with two shutouts.

Since recording the game-winning goal in the third period of a 2-1 win over the Columbus Blue Jackets on October 20th, T.J. Oshie is without a point in his last five games.  It is his longest streak without a point since he opened the 2014-2015 season with a six-game streak.  His performance on the road could use some punching up.  He is 1-2-3 in six road contests, but he is without a point in his last three road games.  He does not have a point against the Flyers since recording a goal in a 4-2 St. Louis Blues win over Philadelphia on October 22, 2011 (four games).  Over his career against the Flyers, Oshie is 2-2-4, minus-1, in eight games.

Philadelphia is a struggling team.  They are 1-5-2 in their last eight games, and they have not won a home game in regulation in almost a month (3-0 over Chicago on October 14th).  They cannot score with any regularity, and unless their goalie pitches shutouts, their chances of winning drop precipitously (2-7-3 in games in which they allow a goal).  The trouble for the Caps is that they have lost four in a row in Philadelphia (0-3-1) since beating the Flyers, 7-0, back on November 1, 2013.  The thing to watch is the play of Braden Holtby.  He is 4-4-4, 2.95, .900, with two shutouts in 13 career appearances against the Flyers.  On the other hand, in three games following losses this season, Holtby is 3-0-0, 1.00, .965, allowing a single goal in each game.  Getting a split on a two-game road trip would not be the worst thing for the Caps.

Posted by The Peerless at 8:50 PM No comments: