The Peerless Prognosticator is ON THE AIR!!! -- Game 34: Sabres at Capitals, December 21st

Hey, didn’t we just do this?  Why yes…yes we have.  The Washington Capitals, who knocked off the Buffalo Sabres in a 4-3 Gimmick win last Saturday at Capital One Arena, get a chance to make it two-for-two on the same ice sheet when the Sabres visit on Friday.  While the Caps will be trying to avoid things like allowing two power play goals and coughing up a lead before coming back to scratch out the win, as they did in last Friday's win, the Sabres will be looking for their fourth win in six games (3-1-1 in their last five contests going into this game).

Buffalo has had some difficulty scoring recently.  After averaging 3.09 goals per game over their first 22 games, they backed off by almost a third of a goal per game, to an average of 2.77 goals per game in their last 13 contests.  One Sabre who has not taken his foot off the gas on offense is Jeff Skinner.  With 25 goals through 35 games, he seems a sure bet to record his fourth 30-plus goal season and demolish his career best of 37 goals in 2016-2017.  This is a player who started relatively slowly, recording only one goal in his first seven games this season.  He put that slump to rest with a hat trick against the Los Angeles Kings in a 5-1 win on October 20th.  Starting with that game he has only once gone as many as three games without a goal, and on only one other occasion did he go consecutive games without one.  He goes into Friday’s game with goals in four of his last five games (five goals in all) and on a seven-game points streak (5-4-9).  If anything, he has been more dangerous as a goal scorer on the road with 14 goals in 18 road contests.  Skinner has dressed for more games against the Caps, most of them with the Carolina Hurricanes, than he has against any other NHL club over his career.  He is 12-13-25, minus-2, in 38 games against Washington.

One might look at Jack Eichel as the consolation prize in the Connor McDavid sweepstakes that was the 2015 entry draft.   Some “consolation” prize.  Eichel is now in his fourth season with the Sabres, who took him with the second overall pick in that 2015 draft, and he has slowly and steadily improved on his numbers.  A 56-point season in his rookie year was the foundation for growing into a near point per game player in his next two seasons.  This year, he has 46 points in 35 games, his 1.31 points per game ranking ninth in the league and his 32 assists tied for fifth.  He has been absolutely on fire of late.  After going consecutive games without a point in mid-November, Eichel is 10-17-27, plus-11, in 17 games.  Over that span he was held without a point only twice while posting ten multi-point games, including a two-goal effort against the Caps last week.  Add to that the fact that Eichel is 5-22-27, plus-7, in 18 road games, and he bears watching.  In seven career games against the Caps, he is 2-3-5, minus-2.

All good things come to an end.  That might be a phrase to use gently around Sabres goalie Carter Hutton.  Hutton cobbled together an eight-game winning streak from November 8th through November 27th, over which he posted a goals against average of 1.97 and a save percentage of .936.  That streak ended with a 5-4 loss to the Tampa Bay Lightning on November 29th and started Hutton down a different path.  In his last five appearances he is 1-3-1, 2.99, ,907, including the trick shot loss to the Caps last week.  Hutton has not had a lot of success on the road so far this season, posting a win-loss record of 4-6-1, along with a GAA of 2.81 and a save percentage of .909, despite seeing less rubber (30.7 shots per 60 minutes versus 32.2 shots per 60 minutes at home).  Hutton is 2-2-2, 3.53, .876 in seven career appearances against the Caps. 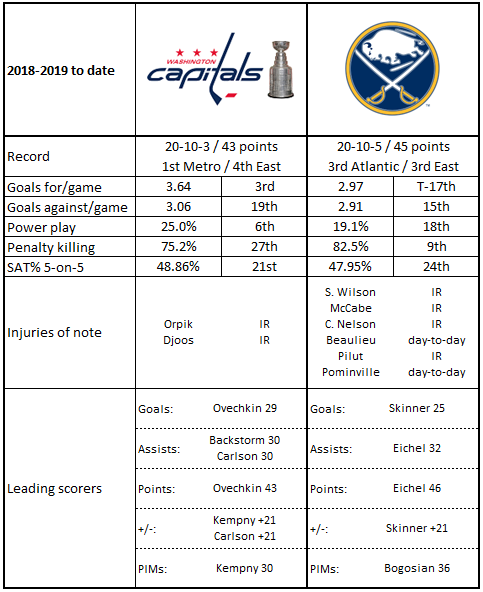 1.  No team in the Eastern Conference has enjoyed as many power play opportunities on the road as Buffalo (60, three more than the Florida Panthers).

2.  The Sabres could stand to be a little tighter with the puck on the road.  Their 167 charged giveaways are fourth-highest in the league.

3.  Buffalo does not do a very good job tilting the ice in their favor on the road.  They 46.95 shot attempts-for percentage at 5-on-5 is 25th in the league.

4.  On the other hand, the Sabres do have fine 5-on-5 shooting and save percentages on the road, the sum of which (1014) is fifth-best in the league.

5.  Buffalo has 19 skaters who have dressed for at least 10 games on the road.  All of them have at least one point.

1.  The Caps have won six straight games against Buffalo at Capital One Arena, outscoring the Sabres by a 25-10 margin.

2.  Last Friday’s game was the first time that the Caps allowed more than two goals to the Sabres since they took a 5-3 decision against Buffalo in DC on St. Patrick’s Day 2013, a span of seven games without doing so.

3.  Washington has pelted the Sabres’ net when hosting them.  The Caps have recorded seven straight games of more than 30 shots on goal against the Sabres in Washington, averaging 38.7 shots per game.

5.  The Caps won only 22 faceoffs (in 56 tries – 39.3 percent).  That was the lowest number of faceoff wins on home ice for the Caps since Opening Night, when they won only 19 of 60 draws against the Boston Bruins.

Last April, Craig Button called amateur prospect defenseman Rasmus Dahlin a “franchise defining blueliner who very well may be the best defenceman entering the draft since Denis Potvin in 1973.”  He has done nothing so far to dispel that point of view.  Dahlin’s 19 points lead all rookie defensemen, reminiscent of Potvin’s leading all rookie defensemen in points in his 1973-1974 rookie season (54 points, well clear of Borje Salming’s 39 points).  He did suffer a seven-game streak without a point when he came to Washington last week, but he broke out of that slump in a big way by having a hand in all three Sabres goals in the 4-3 loss to the Caps (a goal and two assists).  He followed that up with a two-assist night against the Bruins the next night in a 4-2 win.  Last week’s three-point night against the Caps was Dahlin’s first appearance against Washington.

He was suspended for 16 games to open the season, and he went 8-6-14, plus-8, in 11 games before he was concussed against the Vegas Golden Knights.  He missed three games, and they he came back and recorded a goal and an assist in three games, not to mention mixing it up (briefly) with Pittsburgh’s Jamie Oleksiak in the Caps last game.  Tom Wilson is no longer merely a bludgeon, a cruise missile seeking out opponents to target and destroy with a big hit or fisticuffs.  He’s a hockey player, a power forward in the traditional sense of the term, a player who can defend himself or teammates, who can create space for himself and others to work, who can go into the hard areas and be successful, but most of all, he can produce.  In just 14 games this season he is already more than half way (nine) to his career best goal total (14, last season) and is almost half way (16) to his career high in points (35, also last season).  Wilson has points in 11 of those 14 games in which he played, and the Caps are 9-2-0 in those contests.  He is now a player who makes a difference in a lot of ways.  Nevertheless, he is looking for his first career goal against Buffalo.  He has two assists in 16 games and is a plus-1 against the Sabres.

Familiarity, it is said, breeds contempt.  These teams met just a short time ago, so there is still a reading on the contempt meter that might make this an interesting game, especially since the Caps are coming off a tough loss to Pittsburgh on Wednesday.  Buffalo, on the other hand, wants to re-establish some momentum in what has been a pleasantly surprising season so far.  If familiarity breeds contempt, we’ll go with the outcome being a familiar one.

Posted by The Peerless at 6:34 PM No comments: