The Peerless Prognosticator is ON THE AIR!!! -- Game 60: Lightning at Capitals, February 20th

The Washington Capitals return home for their first game at Capital One Arena in nine days when they host the Tampa Bay Lightning on Tuesday night.  The Caps are fresh off a 2-1-1 road trip that enabled them to return home on top of the Metropolitan Division, albeit by the thinnest of margins, a one-point lead over the Pittsburgh Penguins.

Tampa Bay arrives in Washington as losers in three of their last four games, part of a lengthy streak of mediocrity.  Since January 11th, the Lightning are 8-8-0 in 16 games.  Over that span, Nikita Kucherov leads the team in points (17), allowing him to maintain a seven-point lead over Evgeni Malkin in the race for the Ross Trophy as the league’s leading point producer.  The flip side of that is that Kucherov is a minus-5 over the same 16-game span, second worst on the team (Tyler Johnson is minus-7).  He has done a large share of his production in this 16-game stretch on the power play (2-5-7), and two of his four goals over this segment are game winners.  You could say that as Kucherov goes, this season, so go the Lightning.  Only twice in 28 games in which he scored a goal this season did the Lightning lose in regulation (24-2-2), and Tampa Bay is 33-10-2 in games in which he has a point.  Kucherov is 7-5-12, even, in 13 career games against Washington.

Despite missing five games in late January to a lower body injury, Victor Hedman leads the defense in scoring over this 16-game run, going 2-7-9 in 11 games.  It is part of a season overall in which Hedman is sixth in total scoring among defensemen (8-34-42). His plus-24 for the season ranks second among league defensemen and is, so far at least, his best career plus-minus.  His scoring total is not on a pace to provide another career best, but it would be hard for a defenseman these days to surpass the 72 points he recorded last season, which was good for second-best in the league (Brent Burns has 76 points for San Jose).  He has become a real anchor for the Lightning defense, his minutes per game increasing over each of the last five seasons (22:26/22:41/23:04/24:30/25:38).  Hedman is 2-11-13, minus-6, in 32 career games against the Caps.

Andrei Vasilevskiy leads the league’s goaltenders in wins (34), is fifth in goals against average (2.34; minimum: 1500 minutes), is third in save percentage (.927) and has seven shutouts to lead the league.  Only once this season has he lost consecutive decisions in regulation time, dropping three in a row from January 11-20 against Calgary, Vegas, and Minnesota.  What is especially noteworthy about his record this season is his effectiveness on the road.  He has a 2.16 goals against average on the road, compared to 2.51 at home; and his .937 save percentage is 20 points better than his .917 on home ice.  Six of his seven shutouts have come on the road this season.  Oddly enough, his record does not match his performance, going a more modest 15-8-1 on the road, compared to 19-4-1 on home ice.  Vasilevskiy is 1-4-0, 3.58, .892 in five career games against the Capitals. 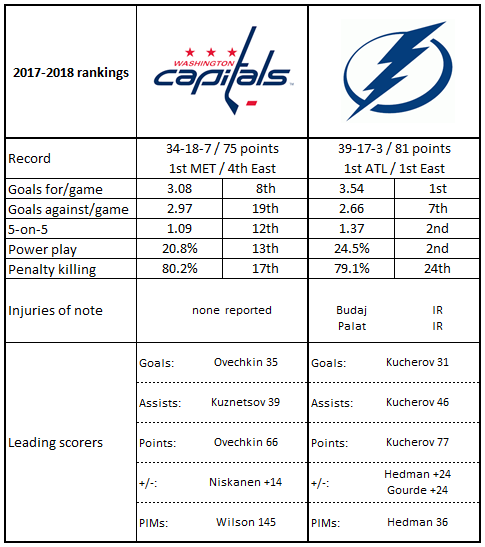 1.  For a team with a record as good as the Lightning, they perform relatively poorly when enjoying early success in games.  Only three teams have more losses in regulation time this season than the Lightning (four): Chicago (six), Arizona (five), and the New York Rangers (five).

4.  The Lightning lead the league in goals scored at 4-on-4 (six).  They have also allowed six 4-on-4 goals, second-most in the league (Colorado has eight).

5.  You would think a team with the Lightning’s record would have better possession numbers, but their 51.54 percent shot attempts-for is just 11th in the league.  They are effective in close situations, though, ranking fourth (52.72 percent).

1.  The Caps are 3-2-0 this season in their first home game following a multi-game road trip.

2.  Washington is 11-4-2 against Atlantic Division teams this season, largely a product of special teams – a 26.9 percent power play and an 86.4 percent penalty kill.

3.  Washington is one of seven teams this season without a goal scored with a 5-on-3 advantage.

4.  The Caps lead the league in winning percentage when leading games at the first intermission (19-0-1/.950).

5.  Only four teams have a worse shot attempts-for percentage in tied games than the Caps (46.19).

Fans would not be surprised to find that Nikita Kucherov and Steven Stamkos lead the Tampa Bay Lightning in goals with 31 and 24, respectively.  Finding Yanni Gourde next in line with 22 would qualify as a surprise.  An undrafted free agent signed by the Lightning in March 2014, he spent four seasons in in the AHL, scoring 80 goals in 298 games, before getting his shot with the big club.  He has taken advantage of the opportunity, tied for second in his rookie class in goal scoring, tied with Chicago’s Alex DeBrincat and trailing only Vancouver’s Brock Boeser (27).  His recent history suggests a tendency to score goals in bunches.  All of his goals in the 2018 portion of the schedule have been recorded in consecutive games – three goals in two games in early January, goals in each of three straight games in late January, another three-game goal streak in early February, and goals in consecutive games on February 12th and 13th.  The odd thing is, though, the Lightning have lost three of the last four games in which he recorded a goal.  In four career games against the Caps he has yet to record a point.

The Washington Capitals pulled the trigger on a trade on Monday, sending a third-round draft pick to the Chicago Blackhawks for defenseman Michal Kempny.  It was not the blockbuster a lot of fans hope for at this time of year, his acquisition seeming to address the need to shore up the third defensive pair.  His experience in the NHL is modest, 81 games over two seasons with the Blackhawks, but the 27-year old has extensive international experience.  He did not get a lot of work with the Blackhawks this season, appearing in only 31 games and logging more than 20 minutes only once.  The odd thing about his ice time is that the Blackhawks were 11-7-0 in 18 games in which he logged more than 15 minutes, 3-7-3 in games in which he skated less than 15 minutes.  Kempny is without a point in two career games against the Lightning.

This is a measuring stick game.  If a Stanley Cup run goes through Pittsburgh for the Caps, Tampa Bay might be on the itinerary as well, and now is as good a time as any to see just how this team stacks up against a club that has been at or near the top of the league standings all season.  The Capitals had the look of a team lacking motivation over the last month or so.  Tampa Bay should provide sufficient motivation.

Posted by The Peerless at 9:05 PM No comments: 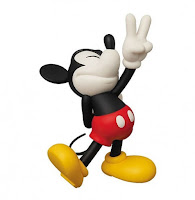 The Washington Capitals wrapped up their four-game road trip with a welcome rebound win over the Buffalo Sabres, 3-2, on Monday afternoon.  It was not the prettiest of wins, but two points is two points, and the win propelled the Caps back into the top spot in the Metropolitan Division over the idle Pittsburgh Penguins.

A scoreless first period gave way to a Capitals goal early in the second period, courtesy of the captain.  The Caps worked the puck around the perimeter, T.J. Oshie sliding puck up the right wing wall to John Carlson at the right point.  Carlson sent the puck across to Christian Djoos at the left point, and Djoos flicked a shot at the net.  Alex Ovechkin, cutting across the slot from right to left, angled his stick for a deflection down and to the right of goalie Chad Johnson, finding the back of the net 78 seconds into the period.

John Carlson gave the Caps a 2-0 lead in the 14th minute of the period when, off an Evgeny Kuznetsov long range shot that caromed hard off the end wall, Carlson looped around the Sabres’ net and slid the puck between Johnson and the near post.  The puck trickled over the goal line just before Kyle Okposo could sweep it away, and the Caps had a two-goal lead at 13:33.

That would be how the teams went to the second intermission, and the third period went 12 minutes without incident for either side.  In the 13th minute, though, Buffalo halved the deficit when a Scott Wilson drive hit Okposo in the low slot and eluded goalie Philipp Grubauer at the 12:42 mark.

Buffalo got no closer, and Evgeny Kuznetsov hounded defenseman Rasmus Ristolainen into a turnover that Kuznetsov converted into an empty net goal with 25.9 seconds left to make it a 3-1 game.  Evander Kane added a window dressing goal with 3.3 seconds left, but it was too little, too late as the Caps skated off with the 3-2 win.

-- Alex Ovechkin’s goal continued the alternating games with goals, on and off.  He has three goals in his last five games.

-- Carlson added an assist, making him the seventh defenseman in the league this season to reach double digit games with two or more points.  He is tied with Tampa Bay’s Victor Hedman with 10.

-- T.J. Oshie finished a plus-3, his bet plus-minus for a game this season.  Evgeny Kuznetsov did the same, his fourth plus-3 of the season.

-- The Caps suffered a lack of shooting effort against Chicago on Saturday.  That was less the case in this game.  Jay Beagle was the only one of 18 skaters without a shot attempt, and he and Tom Wilson were the only Caps without a shot on goal.

-- Jakub Vrana had an assist, his first point on the road since he had a helper in a 4-3 win in Carolina against the Hurricanes on January 12th.

-- Christian Djoos had an assist, breaking a five-game streak without a point.

-- The Caps are in the midst of a short, but odd pattern.  Buffalo had 34 shots on goal, meaning that over the last four games the Caps have alternated allowing 44 shots and 34 shots on goal.

A 2-1-1 road trip is not a bad result, but one would be hard pressed to think the Caps looked good in doing it.  In this game, the Caps played just well enough to win and played just poorly enough to let the Sabres stay in it until the last minute.  The win did enable the Caps to reclaim the top spot in the Metropolitan Division, and it sets them up to add to their lead when they face the Tampa Bay Lightning on Tuesday night.  But the Lightning are now, themselves, in a fight for a division lead with the Boston Bruins closing to within a point in the Atlantic Division standings.  It will be a challenge as the Caps head home.

Posted by The Peerless at 7:31 PM No comments: