The Peerless Prognosticator is ON THE AIR!!! -- Game 27: Capitals at Golden Knights, December 4th

It might be a good thing that the Washington Capitals are heading on the road – far away – to start this week’s schedule.  After surrendering five unanswered goals in a span of 20:14 over the second and third periods, ultimately losing a 6-5 decision to the Anaheim Ducks on Sunday, taking a trip to Las Vegas isn’t the worst thing for the Caps.

That is what lies in store for the Caps as they visit T-Mobile Arena to face the Vegas Golden Knights for the first time since winning the Stanley Cup on that ice sheet last June.  The Caps, who had a seven-game winning streak snapped in the loss to Anaheim, will be looking for their first regular season win, ever, against the Golden Knights on their rink after dropping their only regular season meeting in Las Vegas last season.

What Vegas lacks in top-end goal scoring, they have in balance this season.  Three skaters share the team lead with ten goals apiece.  Not surprisingly, Max Pacioretty is among them.  Pacioretty, who was traded to Vegas by the Montreal Canadiens for Nick Suzuki, Tomas Tatar and Vegas' 2nd round pick in 2019 Entry Draft, had a sluggish start with his new team, recording only two goals in his first 16 games.  It was not a case of being shy about shooting the puck, not with 44 shots on goal in those 16 games.  It suggested more “slump” than something more structural.  And so it was.  In his last eight games, Pacioretty has eight goals on just 22 shots, the same shooting frequency (2.75 shots per game) that he had in his slow start.  Odd Pacioretty fact – he is the only player to wear jersey number “67” for two franchises, Montreal and Vegas.  He is 5-11-16, minus-3, in 29 career games against Washington.

Jonathan Marchessault is another of the skaters with ten goals going into this contest.  Since becoming a full-time NHL-er in 2016-2017 with the Florida Panthers, Marchessault has been a player who could push the 30-goal mark per season.  He had 30 in 75 games in his last season with the Panthers, and last season (his first with Vegas) he had 27 goals in 77 games.  The ten goals he has in 28 games this season puts him on a pace for 29 goals this season.  He has been in a bit of a drought of late, though.  Marchessault is without a goal in his last seven games, his longest streak of games without a goal this season.  Odd Marchessault fact – The 27-year old Marchessault was undrafted as an amateur and is now in his fifth NHL organization.  He was signed to his first pro contract in June 2011 by the Connecticut Whale, the AHL affiliate of the New York Rangers.  After one season with the Whale, he was signed by the Columbus Blue Jackets.  He played two games with the Blue Jackets before moving on to the Tampa Bay Lightning, where he played in parts of two seasons.  Then it was his breakout season with the Florida Panthers before landing in Vegas last season.  Marchessault is 0-5-5, even, in nine career games against the Caps.

Cody Eakin rounds out the trio of ten-goal scorers for Vegas.  Caps fans will remember Eakin as a third-round pick by Washington in the 2009 entry draft.  Eakin made his way up the Caps’ development ladder, eventually appearing in 30 games for the club in 2011-2012 (4-4-8, plus-2).  After that season he was traded to the Dallas Stars with a second-round draft pick for center Mike Ribeiro.  Eakin spent five seasons with the Stars before being selected by Vegas in the 2017 expansion draft.  Eakin is already within a goal of last year’s total with the Golden Knights (11 in 80 games) and is more than half-way to his career high of 19 goals in 78 games with the Stars in 2014-2015.  He has been a bit streaky in his goals scoring, opening the season with three goals in four games before a seven-game drought.  He followed that up with five goals in seven games before a four-game streak without a goal.  He had a pair of goals against Chicago on November 27th but is without one in his last two games.  Odd Eakin Fact – sometime soon, Eakin will become the 14th player of the 2009 draft class to dress for 500 games (he has 484) and the second Capital to do so.  Neither player is with the Caps any longer (Marcus Johansson is the other).  In 11 career games against the Caps, Eakin is 2-3-5, plus-1. 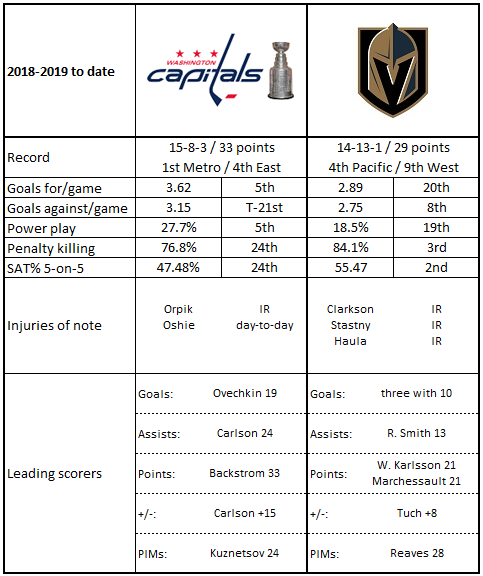 2.  The Golden Knights are struggling with their home power play.  It ranks only 25th in the league through Sunday (15.2 percent).  What will be something to watch for is that the Knights do not yet have a game on home ice in which they recorded more than one power play goal at home.  They do, however, have power play goals in each of their last two home games.

3.  In one respect, Vegas will pit a strength against a Capital strength.  The second periods of games have been good to the Caps this season, but if they are to add to that, it might not come via the power play.  Vegas has the largest time differential on special teams in the Western Conference in the second periods of games this season (plus-18:26).

4.  Conversely, Vegas has the fourth-worst special teams time differential in the league in the third periods of games this season (minus-10:42).

1.  The Caps have 12 wins when leading after two period this season.  That is tied for fourth-most in the league.  Unfortunately, they missed a chance to tie Tampa Bay for third place on Sunday.  Toronto and Nashville are tied at the top with 14 such wins apiece.

2.  The 6-5 loss to the Anaheim Ducks on Sunday was just the second one-goal loss in regulation for the Caps this season (5-2-3).

5.  The Caps have the fourth-worst special teams time differential in the league (minus-22:48).

Nate Schmidt had a disappointing start to the season.  It actually started on September 2nd, when he was suspended for 20 games for violating terms of the NHL/NHLPA Performance Enhancing Substances Program.  He took his medicine, so to speak, and returned to action on November 18th in typical good humor… 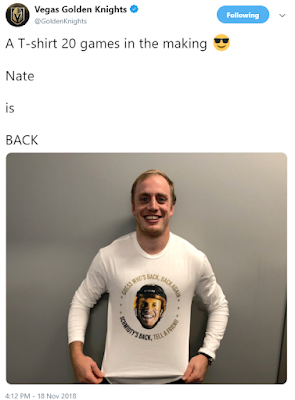 Unfortunately for Schmidt and the Golden Knights, his performance has been underwhelming since his return.  He goes into Tuesday’s game against his old team with a single assist in eight games despite averaging almost 22 minutes of ice time per game.  Schmidt did not have an especially hot start last season, going 1-3-4 in his first eight games, but he did finish 5-31-36, plus-19 in 76 games, and the Golden Knights went 24-6-0 in games in which he recorded at least one point.  It recommended him to a key role this season, suspension or no suspension.  Schmidt has almost 300 regular season games on his resume and is entering his chronological prime (he turned 27 last summer).  His contributions were an important ingredient in Vegas’ historic inaugural season last year.  If the Golden Knights are to come close to replicating that feat, Schmidt’s numbers will have to improve.  He is 0-1-1, plus-1, in two games against his former club.

Lars Eller, the hero of the Stanley Cup final for the Washington Capitals last season, has taken on a bit of a different role this season.  He is something of a cross between “Jack-of-all-trades” and “Mr. Fix-it.”  He has seen his ice time jump by almost two minutes per game, partly due to filling in during the injury absence of Evgeny Kuznetsov (who missed six games with a concussion), and more responsibility on special teams, where his penalty killing ice time is up almost half a minute a game (from 1:48 to 2:12), and his power play ice time is up by 50 seconds a game (from 1:11 to 1:51).  He has been shooting in some bad luck in the first third of the season, his 7.7 shooting percentage (four goals on 52 shots) his worst of his career.  It has not affected his playmaking, his 10 assists already half way to the 20 he had in 81 games last season.  Eller getting on the score sheet is generally a good thing.  The Caps are 7-1-2 in ten games in which he recorded a point so far this season, 4-1-0 when it happens on the road.  Eller does not have a point in three career games against Vegas and is minus-2.

This game is a measuring stick for a veteran team.  Going on the road after enduring as gut-wrenching a loss as the Caps had on Sunday requires that such a loss not be included in the baggage brought along.  This is the third time this season that the Caps went on the road following a loss to wrap up a home stand.  The first time, the Caps dropped a Gimmick decision to the Florida Panthers, and then went to Vancouver and knuckled the Canucks, 5-2.  The second time, the Caps lost to the Arizona Coyotes, and then went off and thrashed the Minnesota Wild, 5-2.  We see a pattern here.