The Peerless Prognosticator is ON THE AIR!!! -- Game 79: Islanders at Capitals, April 5th

The Washington Capitals return home on Tuesday night to host the New York Islanders at Verizon Center in what could be a first-round playoff matchup. The Islanders are not the most likely first-round opponent for the Caps (that remains the Philadelphia Flyers), but it is a significant possibility.

Before that comes to pass, though, these two teams have some things to sort out.  For the Caps, it is a matter of getting off of this alternating wins and losses treadmill that they have been on over the last six games (3-2-1).  It is not the worst six-game stretch of the season for Washington (that would be February 24 – March 4, when they went 3-3-0 for six points), but they can see it from here.

Meanwhile, the Islanders are still in the position of having to fend off competitors to qualify for the postseason.  While their position seems secure, with a three-point lead over the Bsoton Bruins and two games in hand, they have not yet clinched a spot in the postseason.  It is another case of the Caps facing an opponent with a heightened sense of urgency about its playoff future.

The Islanders do come into the week on a mini-roll, having won three of four games going into their game against Tampa Bay on Monday night.  But they also come into the week facing a rock slide of challenges.  On April 1st, head coach Jack Capuano announced that defenseman Travis Hamoic would miss the remainder of the regular season after a knee-on-knee collision with Columbus’ Scott Hartnell last Thursday.

Hamonic joins goaltender Jaroslav Halak, who has been out since he left late in a 2-1 win over the Pittsburgh Penguins with a lower body injury on March 8th.  At the time, the prognosis was that he would be out six weeks.  That would take him to mid-April.  That would leave the goaltending duties to Thomas Greiss and Jean-Francois Berube, but for the fact that Berube was injured in the Islanders’ 5-0 loss to Pittsburgh on Saturday, necessitating the emergency loan of Christopher Gibson from the Bridgeport Sound Tigers to the Islanders.

This, to be obvious, puts the Islanders’ chances of reaching the postseason in serious jeopardy, despite the standings advantage they have over both Philadelphia (currently the second wild-card) and Boston (in ninth place in the conference) going into the last week of the regular season.  Greiss has not exactly grabbed the job by the throat, going 3-5-1, 2.86, .907 in ten appearances (including the game in which he replaced Halak).  Gibson is an unknown, having appeared in one game this season, getting 29 minutes worth of work in relief (16 saves on 17 shots) of Greiss in a 5-2 loss to the Penguins on January 2nd, his only NHL appearance to date.

The Isles will be facing the Caps in the second of a back-to-back set of games, and Greiss has appeared in both ends of a back-to-back this season.  He split a pair on January 2/3 against Pittsburgh (relieved after 31 minutes in a loss) and Dallas (a win), and again on March 8/9 against Pittsburgh (playing just 4:22 in relief of Halak in a win; he did not get the decision) and Toronto (a Gimmick loss).  This is not a promising situation for the Islanders.  He is 1-0-1, 2.92, .922 in two career appearances against the Caps.

Then there are the skaters.  Mikhail Grabovski had played one game since February 19th, skating 17 minutes against Pittsburgh on March 15th in a 2-1 Gimmick loss.  He is listed as “day-to-day.”  As for those who aren’t hurt, apparently some of them are in need of policing their area.  Specifically, head coach Jack Capuano called out Josh Bailey, Ryan Strome, and Brock Nelson as having the need to “pick their s**t up.”  This is a team in a bad place right now, at the wrong time of the year to land there. 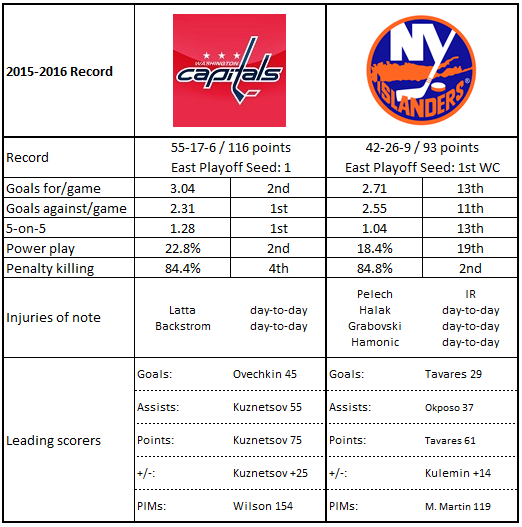 5.  The Islanders have their issues in preventing opponents from launching shot attempts when they are on the road.  New York ranks 25th in shot attempts per 60 minutes at 5-on-5 on the road (58.1). The Islanders and the Rangers are the only teams in the bottom third of the rankings in this category currently eligible for the playoffs (numbers from war-on-ice.com).

1.  In this alternating period of wins and losses in which the Caps are 3-2-1, they have only ten goals scored. Alex Ovechkin and T.J. Oshie are the only Caps with two goals, none of them scored at 5-on-5. Both of Ovechkin’s goals were scored on power plays, while one of Oshie’s came on a power play and the other was scored into an empty net.

2.  Over those same six games, the volume of power play opportunities mattered, even if only coincidentally.  In each of three games in which the Caps had three or more chances, they recorded a power play goal.  In the three instances in which they were held to two opportunities, they came up empty.

3.  The penalty killers have had light work recently.  Washington has faced only 10 shorthanded situations over their last five games, killing off eight of them (80.0 percent).

5.  Over their last ten home games, the Caps have a Corsi-for at 5-on-5 overall of 52.9 percent).  Their Corsi-for plus-minus was plus-10 or better in four of those games, of which they won three (numbers from war-on-ice.com).

It is not fair, but whether the Islanders hold on to reach the postseason might come down to how productive John Tavares is over the Islanders last five games, starting tonight against Tampa Bay.  He has been the straw that stirs the drink for the Isles, who have an 18-5-3 record when he scores a goal and a 24-21-6 record when he does not.  It makes his bit of a dry spell recently consequential.  In his last 11 games, Tavares has three goals, all of them in wins.  But over those same 11 games the Islanders are just 5-5-1.  On a larger scale, Tavares has taken a step back this season with a goal total so far (29 with five games left to play) that is nine behind last year’s total (38) and a point total (61) that is 25 points short of last season (86), a year in which he set career highs in both.  In 24 career games against Washington, Tavares is 11-10-21, plus-1.

If there is a “Public Enemy Number One” among the Capitals for Islander fans, it is a designation held by Tom Wilson.  Whether it started or not with his hit on Lubomir Visnovsky in last season’s playoffs…

…Wilson has a bulls-eye on his back in the view of Islander Nation.  Although only five of his 34 career regular season and playoff fights are against Islanders, you would think Wilson spent all of his ice time marauding over the Islander landscape, plundering and pillaging.  The fact is, although Wilson does rank third in the league in penalty minutes this season, his minutes per game (1.97) is down from last season (2.57) and his fight total (7) is barely half of the total he recorded last season (12).  Meanwhile, he has career highs in goals (7), assists (15), points (22), plus-minus (plus-4), and potted his only career game-winning goal this season, that against the Columbus Blue Jackets last Monday.  Wilson is 1-3-4, plus-2 in 11 career games against the Islanders.

Being able to compete against their cohort of playoff teams is, of course, something the Capitals have to demonstrate to be a bona fide contender.  But there is also the discipline and the cold-eyed approach of putting a team down when they are struggling that good teams do as a matter of routine.  The Islanders are a desperate team, but they are also a very wounded one, a club that has some major goaltending issues and injuries to key personnel.  It is not likely that the Caps would face the Islanders in the first round, but this is an opportunity to demonstrate just how unpleasant such a meeting could be if it was to occur.