The Peerless Prognosticator is ON THE AIR!!! -- Caps vs. Panthers, December 2nd

Well, folks, it’s happened again. Two years ago, it happened…last year, it happened. And now, it’s reared its ugly head again. No, not Evgeni Malkin, but the annual injury bug. The Caps have a third of their roster out with a variety of ailments to upper and/or lower bodies, and as with our past experiences in this regard, we’ve assembled our crack team of consulting medicos… 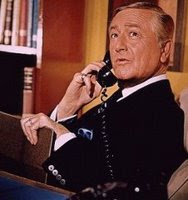 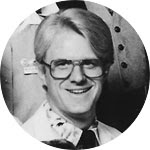 Doctors, it is, as always, a pleasure. Like we said, it’s the annual injury bug that’s hit the Caps. Dr. Kildare, let’s start with you…the Caps have lost, by Tarik El-Bashir’s count, 82 man games to injury. To what do you attribute such a spate of injuries?

Complicated by what, Doctor?

"It seems to me they’re not getting enough fiber in their diet.”

Doctor, these are sprains and such, not constipation.

“Well, I’m old, and that’s pretty much what we prescribed for everything when I was making house calls…oh, and sulfa.”

Dr. Ehrlich, do you have an explanation for this rash of injuries?

"Excuse me, but I think you have me confused with someone else…"

Dr. Casey, I know you don’t waffle on these sorts of things…what explains all these guys getting injured?

“No, I’m just pissed off about that whole Sidney Crosby first star of the week thing…”

OK, so we won’t find an answer to the Caps injury problems, but we do have the usual prognostications to cover, and that brings us to the Florida Panthers. When it comes to tonight’s guests, there are the usual numbers we look at… 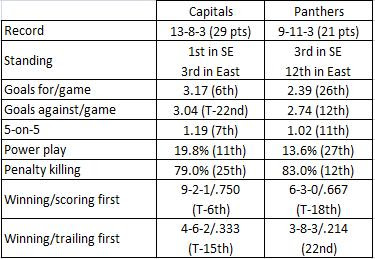 Among the skaters, the Panthers spread their comparatively meager scoring around – 17 skaters have registered a goal – but few inspire much fear. It’s made worse by an injury bug that has infected their locker room just as it has Washington’s. David Booth is the one guy who has been filling the net with some regularity, having scored 12 goals, but he is out for this game with a bad shoulder. Cory Stillman scored five goals in his first seven games, but sustained an injury in a game against Atlanta on November 2nd that was later diagnosed as a concussion. He tried playing through it, but hasn’t dressed since facing Detroit on November 14th.

If those two are out, the offensive burden would normally fall first to Nathan Horton. Trouble is, he was injured in a game last week against New Jersey, suffering a deep cut when a skate cut through his boot and lacerated his ankle.

So, who does that leave? With 23 of the Panthers’ 55 goals likely to be on the shelf for this one (13 of their 29 road goals), Gregory Campbell and Stephen Weiss would be the top goal scorer and point getter, respectively, taking the ice. Campbell has four goals, Weiss 13 points. This is likely to be a very much offense-starved lineup.

You might think it an opportunity for a leader to step up, to stand up and be counted. Jay Bouwmeester had a brutal start, fueling speculation that his contract situation was weighing on him. A start of 0-6-6, -8 in the first 17 games as your team’s best defenseman at both ends will get folks to talking. But in his last six games, he is 2-5-7, +6.

The Panthers will bring something to this game that the Caps do not, and that is scoring from the blue line. Whereas the Panthers are likely to dress only one forward with double digits in points (Weiss), they could bring three defensemen – Bouwmeester, Bryan McCabe, and Keith Ballard – who have at least ten points. It isn’t a lot to hang their hat on, but the Panthers are in a position of having to scratch out goals from just about anywhere at the moment.

It could fall to goalie Craig Anderson to come up with a big game. Coach Pete DeBoer has already announced that Anderson will get his third straight start over Tomas Vokoun in the Tuesday contest. It will be his fourth straight appearance after replacing an ineffective Vokoun in a 3-2 overtime loss against New Jersey after Vokoun allowed two early Devils goals. Since replacing Vokoun, Anderson is 1-0-2, 1.43, .963, with a shutout. He has struggled against the Caps, though, losing all three of his decisions with a 2.68 goals against average and .909 save percentage. Anderson was the Panther goalie of record in the Caps’ playoff-clinching 3-1 win in last season’s regular season finale.

For a guy picked seventh overall in 2004, you expect more of an impact than 35 goals and 82 points in 211 games. So far this year, he is only 2-3-5, -4 in 21 games. He hasn’t had a point in his last seven games, hasn’t had a goal in his last 11. It isn’t as if he’s had particular success against the Caps, either (4-4-8, +2 in 20 games). However, two of his goals are game-winners, and the Panthers are in an injury situation that makes his contributions critical for what success Florida might have tonight.

A subtle change has come to Fehr’s game in the last couple of weeks, at least statistically. Only once in his first seven games was Fehr credited with more than one shot on goal. This is not the sort of outcome one would expect of someone with his scoring pedigree. But in his last six games, he has taken a total of 18 shots. While he has connected on only one of them, he’s now apparently looking more for his scoring opportunities (it’s worth noting that in two of the three games in which he’s registered four shots, he’s had a goal). Call it a hunch, but we think he’s going to find the back of the net for his trouble in this one.

These two teams don’t need locker rooms so much as they could use an emergency ward. There are a lot of man-games that will be on the bench for this one – players that would otherwise make a difference. However, the Caps are the deeper team, the more talented one, and the one with the gaudy home record. If the Caps play to their level of skill and offer an honest effort, the Panthers should not challenge in this one.