The Peerless Prognosticator is ON THE AIR!!! -- Game 13: Capitals at Blackhawks, November 7th

Fresh off a home stand that seemed more like road kill, the Washington Capitals take their act to the road in hopes of not being road kill at the hands of the Chicago Blackhawks at United Center on Friday night.

Washington is having a tough time of it.  Losers of five straight, at least they managed to get the fifth and latest of those games into overtime before falling to the Calgary Flames, 4-3.  What that fourth goal meant, though, is that the Caps have allowed four or more goals in five straight games for the first time since November 11-24, 2008.
In the Chicago Blackhawks, the Caps will be facing a team that has struggled scoring goals in the early part of the season. In 13 games the Blackhawks have scored more than two goals only five times, and they have been shut out twice in their last five contests.  They are averaging only 2.46 goals per game, 21st in the league, after finishing second in scoring offense in each of the last two seasons.

It is hard to pinpoint a reason for the low offensive output to date.  The Blackhawks are reasonably balanced (nine players with two or more goals, 11 with five or more points); they just seem to have received not enough from up and down the lineup.  For example, Jonathan Toews leads the team in scoring (5-5-10), but he is only tied for 42nd in league scoring.  The same applies to Patrick Kane, whose nine points (4-5-9) is tied for second on the club but only tied for 56th in the league.

The Blackhawks came out of an extended offensive funk with a 5-0 win over the Montreal Canadiens on Tuesday, but before that they scored a total of 12 goals over a span of seven games, only once scoring more than two goals.  Jonathan Toews had three of those 12 goals, and Brent Seabrook had a pair during that slump.  Patrick Kane, Marian Hossa, and Brad Richards each had three assists.  After that, the secondary scoring was almost non-existent, at least until the 5-0 win over Montreal when five different players recorded goals.

The scoring problems have put a heavier burden on Chicago’s goaltending, but it has been up to the task.  Corey Crawford was second in the league in goals against average going into Thursday night's games (1.53) and sixth in save percentage (.938).  He was tied for tenth in save percentage at even strength among qualifying goaltenders.  Only once in seven appearances has he allowed more than two goals.  Like Caps goaltenders, Crawford has benefitted from low shot volumes.  Since facing 34 shots in a 3-2 trick shot win in his first appearance of the season, Crawford has not faced more than 28 shots in any game, and he is facing an average of 24.7 shots per 60 minutes.   In four career appearances against the Caps he is 2-1-1, 3.77, .875.

Here is how the teams compare in their numbers to date: 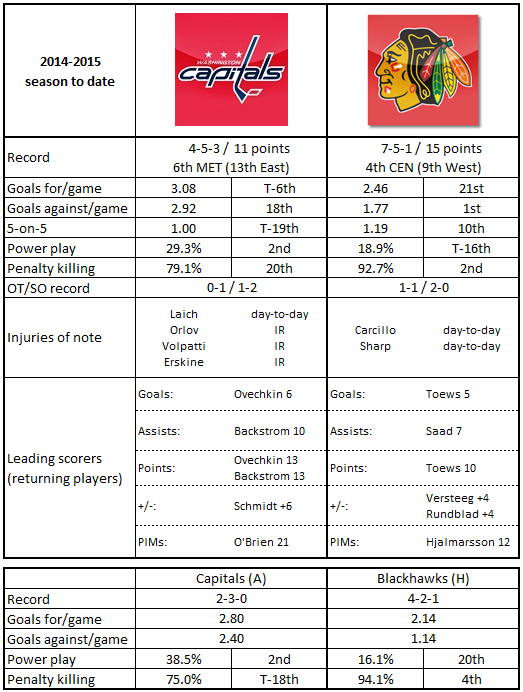 1. No team in the league has had more one-goal decisions than Chicago.  They are not doing well with them.  In ten one-goal decisions the Blackhawks are 4-5-1, tied for 19th in winning percentage.  At the other end of the spectrum, Chicago is one of five teams yet to lose a decision by three or more goals (Pittsburgh, Detroit, Ottawa, and the Caps are the others).

5.  Hits are a somewhat arbitrary metric, but there were the Blackhawks sitting 27th in the league in hits going into Thursday's games.  They and the Red Wings are the only teams left yet to take a major penalty of any kind.

2. No team has spent less time skating with the man advantage than the Caps (54:19), almost five fewer minutes than the New York Rangers (58:59).

4. The Caps are a middle-of-the-road team when it comes to taking faceoffs (49.6 percent; 16th in the league).  What they don’t do is take many draws.  Only Minnesota, Florida, and Carolina have taken fewer faceoffs than the 723 taken by the Caps.

5.  Alex Ovechkin’s next assist will be his 400th in the NHL.  Since he came into the league, only ten players have more:

When Marian Hossa scored a goal late in the third period of Chicago’s 5-4 trick shot win over Ottawa on October 30th, it was his 1,000th point in the NHL.  It is the high point of a season in which he stumbled out of the gate.  Over his first 16 seasons in the league, Hossa averaged 0.91 points per game.  However, through 13 games this season he has just five points (0.38 per game) and has not recorded one since that goal against Ottawa, a pointless streak of three games.  Part of it is that he might be shooting in bad luck.  He has just two goals on 41 shots so far (4.9 percent), by far the lowest shooting percentage of his career if sustained over a full season (11.0 in 2007-2008 being his lowest).

Caps fans might not have envisioned Evgeny Kuznetsov skating on the fourth line with the occasional power play assignment, but that is where he has been spending most of his time since the season began.  In spite of that, however, Kuznetsov was tied for eighth in scoring among rookies (1-5-6) going into Thursday night's games while skating 12:36 a game in ice time, 37th among rookies.  When he was shut out on the score card against Calgary on Tuesday, it broke a three-game points streak that tied his longest of the season and longest of his just-begun career.  Kuznetsov will be making his second career appearance against Chicago.  He had an assist in a 4-0 Caps win over the Blackhawks last April 11th.

This preview of the 2015 Winter Classic features two teams that are struggling.  Chicago can’t score, and the Caps can‘t hold a lead.  This game, however, might turn on something else, strength on strength, the Caps’ second-ranked power play against the Blackhawks’ second-ranked penalty kill (before last night's games).  Washington has power play goals in 9 of their last 11 games (33.3 percent), so they will present a challenge for that Blackhawk penalty killing group.  The Caps have won four of their last six meeting against Chicago, so what’s one more?