The Peerless Prognosticator is ON THE AIR!!! -- Game 56: Kings at Capitals, February 11th

All good things come to an end, and on Monday night the Washington Capitals’ longest home stand of the season does just that when they host the Los Angeles Kings at Capital One Arena.  The Caps will be trying to close out the home stand with four wins in six games and points in five contests.  On the other side, Los Angeles will be wrapping up a six-game road trip in search of their own fourth win and fifth game with at least one point earned.

It has been a difficult season for Los Angeles that started poorly and just got worse.  They opened the season with a 2-7-1 record in their first ten game, didn’t win consecutive games until Games 13 and 14 on the season, and are now within two regulation losses (27) of the total that they had all of last season (29).  That they are 12-7-2 over their last 21 games seems to be of little consolation, the hold they dug for themselves to start the season being just too deep.  Despite the improvement, the Kings are eight points out of a playoff spot and with six teams to climb over with 27 games to play.

The Kings have a certain balance in their scoring, six players having recorded at least ten goals.  The trouble here, though, is that none of them have as many as 20.  Anze Kopitar leads the club with 17 goals.  Almost half of those goals (eight) have come in his last 13 games, and with 14 points in that span he has a hand in more than a third of the total number of goals scored by Los Angeles (41).  Now in his 13th season, Kopitar is royalty in Kings’ franchise history.  He is in the club’s all-time top ten in regular season games played (976/fourth), goals (307/fifth), assists (562/fifth), points (869/fifth), plus-minus (plus-92/third), game-winning goals (47/tied for third), shots on goal (2,420/fifth).  He is equally high-ranked in Kings postseason history, ranking fifth in games played (79), sixth in goals (21), third in assists (45), third in points (66), and first in plus-minus (plus-24).  Last season was Kopitar’s most productive in the NHL with 35 goals and 92 points, and he is unlikely to duplicate it this season with 17 goals and 41 points in 54 games, even with his recent surge.  In 16 career games against Washington, Kopitar is 9-6-15, plus-5.

Over the five seasons preceding this one, no goaltender appearing in at least 150 games had a lower goals against average than Jonathan Quick (2.24).  He will not come close to that this season, his 2.99 goals against average to date (what would be his worst over a full season in his career) ranking 27th of 35 goalies appearing in at least 25 games.  Add to that his missing 17 games in two separate instances to a lower body injury and knee surgery, and this has been a difficult year for the 12-year veteran.  The all-time team leader in games played (584), wins (304), goals against average (2.31; minimum: 100 games), save percentage (.916; minimum: 100 games), and shutouts (51) has been up and down of late.  Over his last ten appearances he is 5-3-2, but in those appearances he has had three with a save percentage over .950 (including a 16-save shutout of the Edmonton Oilers on January 5th) and four with a save percentage under .900.  Quick is 9-2-0, 2.23, .920 in 11 career appearances against the Capitals. 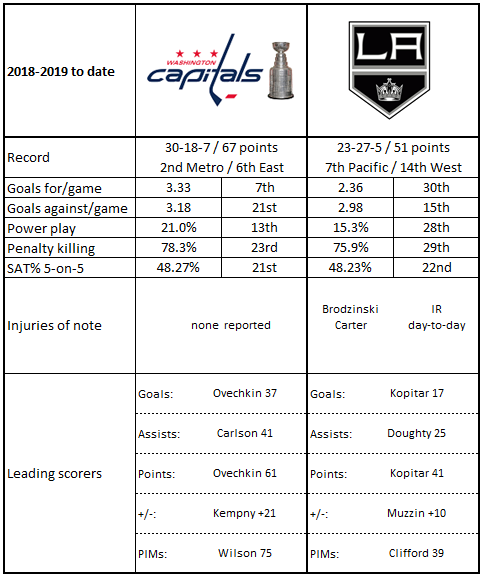 2.  No team has fewer power play goals on the road this season than Los Angeles.  The nine they have are tied with the Caps and the Philadelphia Flyers.

4.  The Kings have not won often this season, but they have spread the good cheer around when they did.  Twelve different players have game-winning goals, led by Tyler Toffoli and Dustin Brown with three apiece.

5.  Los Angeles does have the grittership thing working though.  They are the only team in the league that is top-five on the road in hits (678/fifth) and blocked shots (458/fifth).

1.  Among Metropolitan Division teams, Washington has had the most power play chances on home ice (102), and they have the most efficient home power play (24.5 percent).

2.  Among that same group, the Caps have had the most shorthanded situations faced (101) and have allowed the most power play goals on home ice (22).

3.  No Metropolitan Division team has fewer shorthanded goals scored this season than the Caps (three).

When last we saw Ilya Kovalchuk in the NHL before this season, he was scoring 11 goals in 37 games for the New Jersey Devils in the abbreviated 2012-2013 season.  Well, he has those 11 goals once more, this time in 45 games with the Kings.  He is an experiment that did not go quite as planned.  After spending five years in the KHL with SKA St. Petersburg, he returned to the NHL this season, signing a three-year/$18,750,000 contract.  He started the season slowly, posting only five goals in his first 25 games before going on the shelf for 10 games to recuperate from ankle surgery.

Since returning to the lineup, his goal-scoring pace has picked up, six goals in 20 games, but still not what one might expect for a $6 million-plus per year player with his pedigree.  Worse, he just has not been a difference maker on a club with more holes than one player, even a prodigious goal scorer, can fill.  In the ten games in which he has goals, the Kings are just 4-5-1.  They seem to do better when he is a helper, going 8-3-0 in games in which he has at least one assist.  Kovalchuk has a no-movement clause for this season (and next) in his contract, and has not committed in public to a trade.  The Kings, who have four forwards with a cap hit of more than $5 million tied up for next season, would seem to be interested in moving Kovalchuk off their books, even if they have to eat salary to do it.

When Lars Eller scored a goal in the Caps’ 5-4 overtime loss on Saturday night, it broke a personal 13-game streak without a goal.  Getting pucks into the net has been a challenge for Eller this season.  Even with that goal on Saturday night, he has only seven goals in 54 games this season after posting a career-high 18 goals in 81 games last season.  He has only three goals in his last 34 games.  What makes Eller’s goal scoring profile even more strange is that the Caps have lost four of the six games in which he has goals this season (2-2-2).  They ar 8-2-3, though, when he has at least one assist.  The relationship of his ice time to the team’s success is a bit odd, too.  Washington is 6-2-1 in games in which Eller skated less than 15 minutes.  There might be other indicators of an indirect sort in Eller’s performance that are associated with success.  Seven times this season, Eller has won ten or more faceoffs.  The Caps are 6-0-1 in those games.  They are 5-0-1 when he was credited with two or more blocked shots.  In 11 career games against the Kings, Eller is 3-1-4, minus-2.

For the Caps, scoring first will be important here.  Important to get the jump on a team in its last game of a long road trip, important to get a lead on a team with little to play for, important because no team in the league has lost more games in regulation when allowing the first goal than the Kings (23).  But just as important, the Caps need to deal with their third-period issues.  This would be a good team against which to do that.  The Kings have the second-worst winning percentage in the league when trailing after two periods (.043/1-21-1).  Get a lead, keep a lead.  Against Los Angeles, there really isn’t a reason to do otherwise.

Posted by The Peerless at 1:43 AM No comments: