Mark Twain wrote that long before Matt Bradley strapped on a pair of skates, but Twain probably had someone like Bradley in mind when he penned those words. Bradley is not necessarily known as a fighter, but he is a stand-up guy (and he did have as many fights as Derek Boogaard last season). And “fight” might apply to more than the usual fisticuffs. He’s there when it counts in this respect – of his 23 regular season goals scored for the Caps in four years, four have been game winners, which is actually a better percentage of game-winners than Alex Ovechkin over his four years (ok, we’re reaching). And in the playoffs last season, Bradley scored only two goals, but mighty important goals they were. They got the Caps off and running in Game 5 in the opening round against the Rangers, the first two goals (the first of those being shorthanded, the other scored from “The Bradley Corner” at the bottom of Section 103 of the Verizon Center)) in what would be a 4-0 win.

There is an odd facet of Bradley’s game that merits notice. He was third on the club among Caps forwards in hits last season, and he did have those nine fighting majors. He is no shrinking violet. But he took only seven majors in 81 games played last year, 14th among all Caps forwards. The previous year he had 12 minors in 77 games (that would be the same number as Michael Nylander in 40 games). Bradley seems to have a rather clear idea of the limits of the rules for one who plays such a crash-bang style of hockey.

Fearless: Bradley has had an odd consistency of his own in his first three years with the Caps. On a per 82-game basis, he finished 8-13-21, 6-13-19, and 7-11-19 in years one through three with the Caps. Last year, in year four, he was 5-6-11. But he also was 2-4-6, +3 in 14 games in the playoffs, including those big goals scored in Game 6 of the Rangers series. He has eight points in 21 playoff games, making him one of those few players who picks up his scoring in the spring phase of the season. He might be a player to keep in the back of your mind next spring, not that he’s going to be the latest John Druce, but perhaps being one who pots the occasional goal when it counts most. 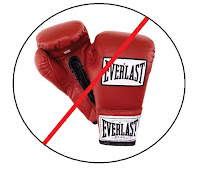 Cheerless: Somebody might want to put this up in Bradley’s locker, cuz. That 0-5-4 record in fights last year was painful to watch at times. Besides, the Caps were 3-5-1 in games featuring a Bradley bout. Let him abuse guys within the rules.

"[Matt] Bradley said he required a dozen or so stitches on the inside and outside of his upper lip after his fight with Paul Bissonnette last night. The complexity of the stitch job, he said, is what prevented him from getting back on the ice sooner. 'I wanted to come back earlier, but it took them to the end of the second period to finish,' Bradley said. 'It was a tough job; they did a great job.' He added: 'Stitches aren't a big deal. After that I was fine.'"

Bradley said the minor league recall 'wanted to make a name for himself' so he began chirping at him and John Erskine early in the game. 'We were down at that point,' Bradley said. 'So I figured let me do something to spark the team.'"

But given one web site’s record of Bradley’s bouts last year – 0-5-4 – one might be forgiven for thinking that Bradley should limit his scraps. But he is pretty much the definition of an “energy” player. He’ll hit anything that moves, but he does so within the confines of the rules. He’ll get ten minutes a game, register 100-plus hits (he has in three of four years, averaging 107 a year). He won’t score much, but when he does it will be a contribution (the Caps were 4-1-0 in games in which Bradley had a goal last year, plus going 1-0 in the playoffs). Contributions at least as important as those he makes in his academic pursuits of hockeyology.

Posted by The Peerless at 3:44 AM No comments: