“The greater the difficulty, the more glory in surmounting it.  Skillful pilots gain their reputation from storms and tempests.”
-- Epictetus

When Braden Holtby won ten of 14 decisions in his first NHL season, including eight of his last nine in which he had a goals against average of 1.01 and a .964 save percentage, in 2011-2012, Fans of the Washington Capitals might have been forgiven if they thought they were looking at their goaltender for the next decade.

Holtby came into the 2017-2018 season seeking to become the first goaltender in NHL history to win more than 40 games for a fourth consecutive season.  When he started 13 of the Caps’ first 18 games, posting a 10-3-0, 2.35, .927 record, he seemed on his way to doing just that.  But then, the wheels got a bit wobbly.  Starting with a disastrous six-goals-on-25-shots effort in 40 minutes of a 6-3 loss in Nashville to the Predators on November 14th, Holtby split his next six decisions, posting a 3.21 GAA and a .900 save percentage.

With the calendar turning over to December, Holtby appeared to right himself.  In 13 appearances from December 2nd through January 7th, he was 11-2-0, but the win-loss record outperformed his performance numbers, a 2.78 goals against average and a .913 save percentage.  The problem with his underlying numbers caught up with Holtby with a vengeance starting in mid-January.  In 14 appearances from January 11th through February 26th, he went 4-6-4, 3.84, .887, and was relieved by Philipp Grubauer three times.  It was arguably the worst stretch of his career.

Any dreams of a 40-plus win season had long been dashed, but Holtby did recover to go 6-2-0, 2.83, .904. It was not a return to numbers one had become accustomed to with Holtby.  Not only was the regular season an overall disappointment (of 45 goalies with at least 1,500 minutes played, he was 36th in GAA (2.99, his worst in eight NHL seasons) and save percentage (.907, also a career-worst)), his role as number one goaltender heading into the postseason was in jeopardy. 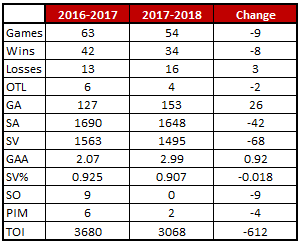 Odd Holtby Fact… Braden Holtby was pulled early (not for an extra attacker in a late-game situation) seven times in 54 games.  Every one of the seven instances was a road game.

Braden Holtby came into the 2017-2018 season with an unenviable record against the Pittsburgh Penguins.  In 17 career regular season games against the Pens, Holtby was 7-7-2 (one no-decision), 2.77, .914, with two shutouts.  When the Penguins came to Washington in November, they already had a win on their side in the season series, a 3-2 win in Washington on October 11th, Holtby taking the loss.

The rematch proved to be different.  In the earlier meeting, Pittsburgh took a first-period lead, added to it mid-way through the second, and then they added an insurance goal early in the third period, earning the win with never having trailed.  In this game, it was the Caps who would open the scoring on a late first period power play goal by John Carlson.  The Caps kept the hounds off Holtby, holding the Pens to seven shots on goal, all of which Holtby turned aside, including a stop on a Conor Sheary breakaway late in the period.  Holtby kept the Caps in front early in the second period with a save on a point-blank shot from the low slot by Greg McKegg before Phil Kessel tied the game in the ninth minute of the period.  The Caps rebounded when T.J. Oshie restored the Caps’ lead late in the middle frame.

Holtby preserved the lead when he made a couple of sparkling saves on Phil Kessel and Patrick Hornqvist on a Penguin power play early in the period.  The Caps took advantage of Holtby’s fine play, scoring mid-way through the third period on a goal by Chandler Stephenson, and then adding a Jakub Vrana empty net goal for the final 4-1 margin.  Holtby stopped 27 of 28 shots in helping the Caps avoid slipping to a .500 record in the early going.  More important, and perhaps more satisfying, the win was Holtby’s 200th in the NHL, earned against perhaps his most difficult foe.

Braden Holtby’s shortest outing of the season came against an unlikely opponent.  Before facing the Columbus Blue Jackets in late February, Holtby had compiled a solid 14-3-2, 2.47, .918 record with one shutout.  On this night, though, the Blue Jackets would buzz Holtby relentlessly.  Columbus scored on their third shot of the game, a goal by Artemi Panarin 5:31 into the first period.  They scored on their fifth shot (Sonny Milano), their ninth shot (Mark Letestu), and their 13th shot (Sean Jones).  When the period was over, Holtby had surrendered four goals on 14 shots, and his night was over in what would be a 5-1 loss, just 19:28 of work to show for it.  It was the tenth time in Holtby’s career he played 20 or fewer minutes in a game and the first time it happened on the road in more than three years (November 29, 2014 at Toronto, in which he skated 20 minutes and allowed three goals on nine shots in a 6-2 loss).

Postseason… Braden Holtby’s late-season slump and Philipp Grubauer’s superb play gave head coach Barry Trotz little choice, based on their respective numbers, but to start Grubauer in Game 1 of the opening round series against the Columbus Blue Jackets.  The plan did not go as one might have hoped.  Grubauer allowed four goals in each of the first two games, stopping only 41 of 49 shots in two overtime losses.  Grubauer escaped being tagged with the loss in Game 2 when Trotz then turned to Holtby for the third period of a 4-3 game, Columbus in the lead.  The Caps tied the game, but Holtby surrendered a goal to Matt Calvert in overtime to give Columbus a 2-0 lead in the series.

Holtby got the start in Game 3, and he was brilliant, stopping 33 of 35 shots in a 3-2 double-overtime win.  He stopped 23 of 24 shots in Game 4 to draw the Caps even and give them a footing to close out the Blue Jackets in six games.

That meant facing Pittsburgh in the second round, again, for the third straight season.  And if Holtby had problems with the Penguins in the regular season, they were multiplied in the postseason.  Going into this series he had a career playoff record of 5-8, 2.57, .908, in 13 games against Pittsburgh.  The first four games of the series seemed to play to the usual script.  The Caps played the Pens even, splitting those first four games, even as Holtby put up decent, if not spectacular numbers (2-2, 2.27, .913).  However, in Games 5 and 6, Holtby dug deep, stopping 36 of 39 shots in a 6-3 Game 5 win, and then turning away 21 of 22 shots in the Caps’ 2-1 series clinching overtime win in Game 6.

Holtby was solid in the conference final against Tampa Bay, posting a 2.04 goals against average and a .919 save percentage in the Caps’ seven-game win.  It was his effort in Games 6 and 7, with the Caps trying to overtake the Lightning and their 3-2 series lead, which was critical.  He shutout the Lighting in both games, stopping all 53 shots he faced to secure the win, becoming the first goaltender in more than 80 years to pitch consecutive shutouts in elimination games in the postseason after not having had a shutout in the regular season (Earl Robertson did for the Detroit Red Wings in 1937).

That left only the Vegas Golden Knights in the final, where he would face Marc-Andre Fleury, who got the better of Holtby in earlier postseason meetings.  Holtby was lit up for five goals on 33 shots in the series opener, a 6-4 Vegas win.  But he was superb thereafter, winning the next four games with a 2.00 goals against average and a .934 save percentage.  One of those stops came in Game 2 with the Caps nursing a 3-2 lead with the clock ticking toward two minutes left to play in the third period in an effort to tie the series at a game apiece.  It will be forever remember in Capitals Nation simply as, “The Save”…

In four seasons preceding this one, Braden Holtby established himself as an elite goaltender in the NHL, a goalie one might include annually in the conversation about a Vezina Trophy winner, an award he won in 2015-2016 and for which he was a finalist in 2016-2017.  This season was far more difficult, one that included ups and downs of a sort not seen much from Holtby in his previous seven seasons.

The experience seemed to temper him, though.  He took his demotion to open the postseason like a professional, and like a true pro was ready to assume the duties of number one goalie once more when called upon.  His playoff body of work in 2018 was not of the spectacular sort such as that in 2015, when he led the league in goals against average (1.71) and save percentage (.944) in 13 games.  However, in the 23 games in which he played and the 22 in which he started, he was solid, giving the Caps a chance to win on most nights and being the player to lean on in the late stages of the conference final against Tampa Bay.

Holtby skillfully navigated the difficulties that led to the season’s hills and valleys, and perhaps it was necessary, the final trial – for him, not to mention the Capitals – to finally win a Stanley Cup.